A Christmas Obscurity: The Nobodies of Santa Claus Land, Discovered by a Modern Columbus 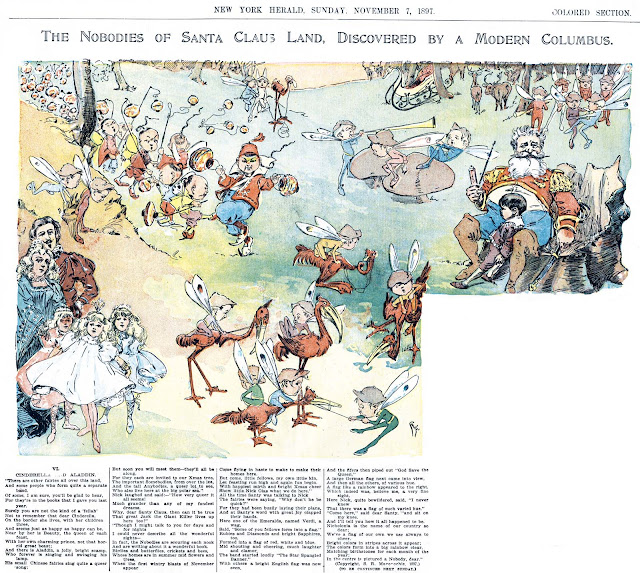 Comic strips? Oh, yeah, I remember those things. Used to like them. Liked delving into their history. Hazy, but it's coming back to me now.

But that was in the before times, the long ago carefree days when I wasn't renovating a house. See, I bought this house last winter, to renovate and resell. But the project, which was expected to take about four months, ended up taking ten. It became an unremitting slog, everything taking longer than expected, materials very hard to source because of the pandemic, and prices spiralling for the same reason.

In one way, the project was great. We started work just a week or two before covid became an issue, and while many people found themselves stuck at home twiddling their thumbs, boredom was the least of our problems during this pandemic crisis. In fact, bizarrely enough the pandemic was in a way the savior of the venture. You see, rural Nova Scotia has been practically untouched by covid; in fact it has been touted as one of the safest places to be in the world during the pandemic. That has stimulated the real estate market here to go bonkers. Canadians and foreigners from big cities are trying to escape here in droves. Our project, which went far over budget, could have turned into a veritable ocean of red ink, but due to covid we ended up having a very easy time selling the property for a reasonable, if not spectacular, profit. To everything ... even a pandemic ... there is a silver lining I suppose.

The house sale closed on December 21, and I plan to take it easy for the rest of the winter. That means hopefully lots of time spent researching and blogging about comic strips ... my idea of R&R. No idea if anyone is still out there checking in with the blog, so I may well be in an echo chamber, but, well, shrug. My apologies to Stripper's Guide readers for leaving you for such a very long time.

The blog will probably not get daily updates like it used to, at least for the near future. I certainly don't plan to go straight from one daily slog right to another. So I ask for your patience. I'm also very interested to hear if you have any ideas for content, as I'd like to come up with some different themes than our old tried and true ones. I do want to go back to our Cartoons Magazine series, the George Herriman series (if I can ever find the remaining stack of material in some box somewhere), and maybe even finish the final letters of the Mystery Strips of E&P series. That one has been languishing for a very long time.

As an aside, due to my work schedule I have been leaving many emails unanswered over the past months. I apologize to all who have written and been met only with silence back.

So, all that housekeeping out of the way, today's special Christmas obscurity brings together an unwieldy title, excruciating doggerel, a plot that is all but MIA and cartoons that can't really be bothered to have much to do with the text. Merry Christmas from the New York Herald, 1897!

The Nobodies of Santa Claus Land sports some decent art by J.M. Condé, but the art fails to really illustrate the story. In the episode above the climax of the action is the formation of the flags, but Conde didn't read that far. He elected rather to draw vignettes of the fairy tale characters mentioned early on. I can't say I blame him for reading only the first few stanzas as the verses by S.R. Maconochie* could be classified as torture under the Geneva Convention.

The series ran in the Herald from October 3 to November 28 1897. On that last date it looks like the art is by someone other than Condé, but it is unsigned. That installment tells us that the series will run through December 19, but it was never seen again, at least on the New York Herald microfilm I reviewed.

* The versifier may have been hiding behind a clever pseudonym. Although Maconochie is a known surname, it was in these days also the name of a detested soldier's tinned ration. Bad stew ... dog food ... doggerel ... Maconochie?

Comments:
You mentioned Herriman. In 1929 the Chinese vice consul's wife was grabbed with tins of opium at the SF port. KRAZY KAT By Herriman, Sf Examiner 11JUL1929 p.18
OFFISSA PUPP: DAWGUNIT! IT LOOKS LIKE THIS "PEACE PIPE" HAS GIVEN THEM AN OVERDOSE OF PEACE.
FRAME 2: AND IT'S LOADED WITH NOTHING BUT THE FINEST TOBACCO TOO--WITH PEACE IN EVERY FIBER OF IT--SNIFF
FRAME 3: HMMM IT TASTES PEACEFUL ENOUGH--THERE ISN'T A BIT OF HARSHNESS TO IT.
FRAME 4: IGNATZ, KAT AND PUPP ARE ALL PROPPED UP WITH A LOG FOR A PILLOW SLEEPING SIDE BY SIDE.

Welcome back! Thanks to the modern convenience of a RSS feed, I don't need to check manually if there are new posts.
Anything you do will be interesting, but here's an idea. I've always wanted a grand encyclopedia of comic strip themes and tropes: the masked mugger in the alley, the wife with the rolling pin behind the door, the flip-take. You can't even start on any of those without already having an encyclopedic knowledge of the terrain. So how about every once in a while having a historical treatment of some theme or another?
(The TV Tropes site does this, sporadically. Nice but not thorough or authoritative.)

Welcome back! It's good to see you.

Great to read that you have put your house in order, so to speak. I'm sure your readers will all return in no time. So welcome back, and a happy new year.
Now, I named them damn comic stamps, been looking at them every day since August, I forget- was there a prize involved, or no?
Also,what do you make of the "Cut-Out Toy" feature and what the mysterious alternate syndicates mean?
Yours,
Mark Johnson

Just so you know, although I don't necessarily read the blog every time you post something, it's a wealth of information that I reference quite a lot, very often searching for old posts that have even a bit of information about some obscurity that I'm interested in. More often than not I find something, which is astounding. So, while you may not know if anyone's reading this, I think you're doing important work, and I really appreciate it!

Welcome back. You were much missed.

Welcome back. Happy with whatever obscurities you dish up. Glad to hear about the house. We had the same idea few years back in Oz. Still going after 6 years due to a myriad of misfortunes. Had no idea what I was taking on. Glad your turned out.