From the Archives Sub-Basement: A Couple of Interesting Mexican Newspaper Comics

Working away at organizing the boxes and boxes of miscellany here at the Archives, I came across a few Mexican Sunday newspaper comics sections. Of course most of the contents are translated US comics, but each section had a little homegrown content. I decided I had to share a few items with you. First, here is the cover feature of El Heraldo de Mexico for May 18 1980, titled Johnny Galaxy: 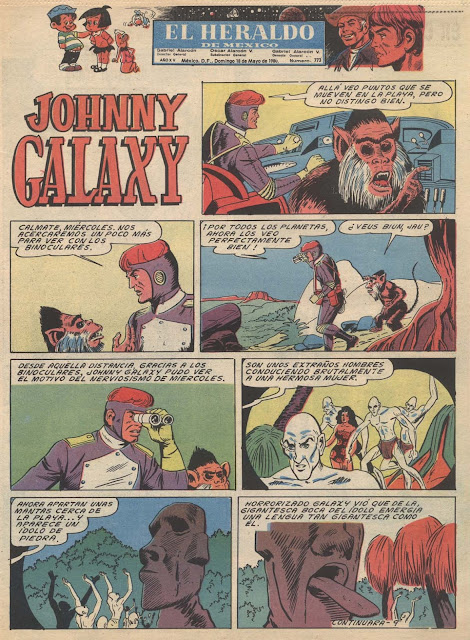 I had this one pegged for a foreign import, but clicking around the web I'm not so sure anymore. Seems like this feature appeared in various comics anthologies in various countries, and that the ultimate origin of the strip is surprisingly murky. One website suggested that it was produced by a Spanish comics publisher. I don't know if they mean in Spain, or perhaps in Mexico? In any case, it certainly seems odd that a Spaniard of any country would name his hero Johnny, right? Anyone have any wisdom to share about this feature?

Second, I was pretty blown away by the delight ful art on Chicharrin y el Sargento Pistolas: 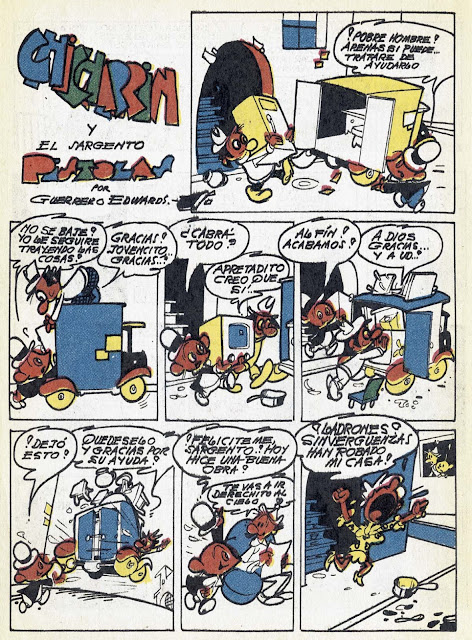 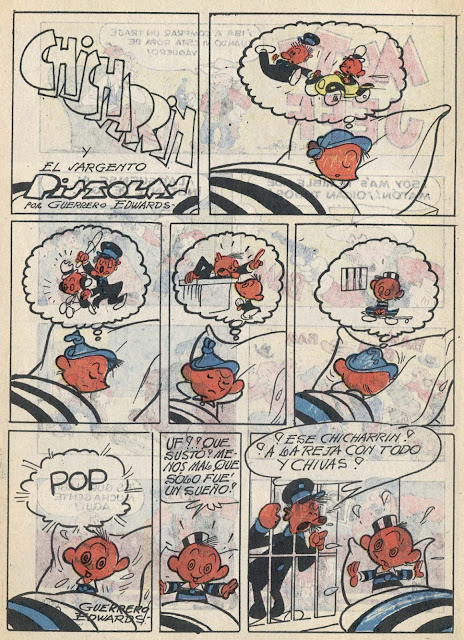 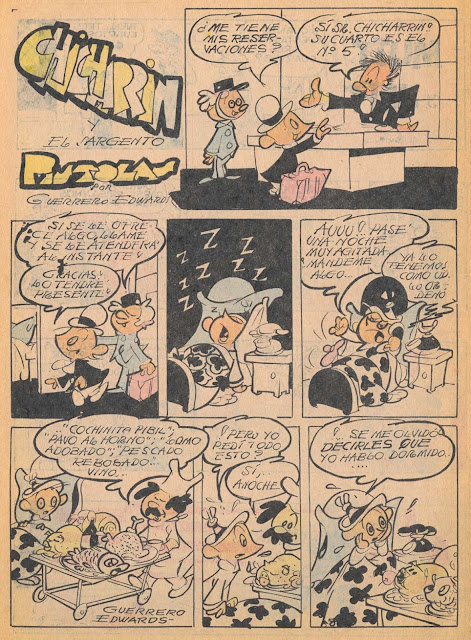 These strips from 1984 Sunday sections of an unknown paper may be badly colored and suffering from bleed-through, but I really like the artist's energy. I was very surprised to find that the creator, Guerrero Edwards, started this strip around 1936, and did it into the 1990s. Wow, we're talking about a record run! Hard to imagine art that fresh and joyful could come from a cartoonist by then in his 80s. I found one short bio of the cartoonist online here, which I ran through Google translate:

Born in Pachuca on December 30, 1903, Armando Guerrero Edwards, was the creator of emblematic comic strips, published for decades in the Mexican press, such as Chicharrín and Sargento Pistolas, which were distributed over 66 years.

There is not much information about the cartoonist Armando Guerrero, it is known that he entered a contest organized by the newspaper El Universal, and although he did not win the first prize, he was among the first twenty finalists, some of his works were published.

It would be from 1926 that he began to publish more constantly: Life and miracles of Pinolillo and Nacho Naranjas, Aventuras de Pirrucha and Ranilla.

His most memorable creation was Chicharrín y el Sargento Pistolas, which was published in the evening of Excelsior Últimas Noticias. The strip showed the adventures of a mischievous boy and an abusive cop.

Despite the fact that its purpose was not to generate criticism, as its successors would do with political cartoons, but simply to entertain, at that time it laid the foundations for comics in Mexico; later Rius, Fontanarrosa, Magú, among other moneros and caricaturists would arrive.

José Luis Diego Hernández “Trizas”, president of the Mexican Society of Cartoonists, during the presentation of an edited volume on Guerrero's work, commented: “Don Armando was the creator of characters that became icons in our history, Chicharrín and Sergeant Pistolas have remained in the collective memory, they have made several generations of Mexicans laugh ”.

Armando Guerrero deserves to be remembered as one of the pioneers of Mexican comics and a pillar of the national graphic culture. Chicharrín y el Sargento Pistolas was published from 1936 to the 1990s. Armando Guerrero Edwards died on September 25, 1995.

Comments:
Hello Allan-
Johnny Galaxy was originally a comic book put out by the Spanish publisher Selecciones Industradas in 1959, created by José M. Beá (Born in Barcelona in 1942). Like many series, it was soon published in multiple languages by multiple publishers throughout Europe in the 1960s and even as far afield as Australia. It would seem that Mr. Galaxy's adventures have been over for many years, though, and some kind of cat expert is using his name all over the internet now. Beá is quite prolific, doing mostly horror titles, some, like Vampirella in the US.

In fact European comics from the 30s through the 50s often gave their characters exotic English names like Johnny, Bill, Larry, and Jack. This sometimes led to odd combinations like the French hero Teddy Ted (his first and last name).

A couple of years back I sat waiting for someone in the entry court of a large Brazilian supermarket. Of roughly 300 people who walked past me, most wearing message T-shirts, ALL of those T-shirts were in English. Many are incorrect, but nobody notices. Last month I saw a "Keep on Raveing" message.

The most preposterous misuses of English must be from the hands of the Japanese, who will make incoherent word couplings for anything from grocery store products like "Dessert Rythm"" Tooth Paste, to Tee shirt/ ball cap mottos like "The Pig Is Full Of Many Many Cats" or "Round eyed LAD dwarf bravery THIS percieve". Maybe it's Zen, or something.
This, and the American sounding names in Eurocomics, stems from the fact that for over a century, our popular culture has had an impressive presence. Our Movies, music and even comics were eagerly accepted by the world, who for the most part, were fascinated by it and us. It would seem only natural that their own creations might try to assume even a tiny bit of American style glamour and adventure.

And then there's the French comics character, Buck Danny. After all these years, I still don't know if his creators meant his name to be Buck Danny or Danny Buck. Ya know, like Canyon Steve and Hazard Johnny. Or Mouse Mickey and Duck Donald.