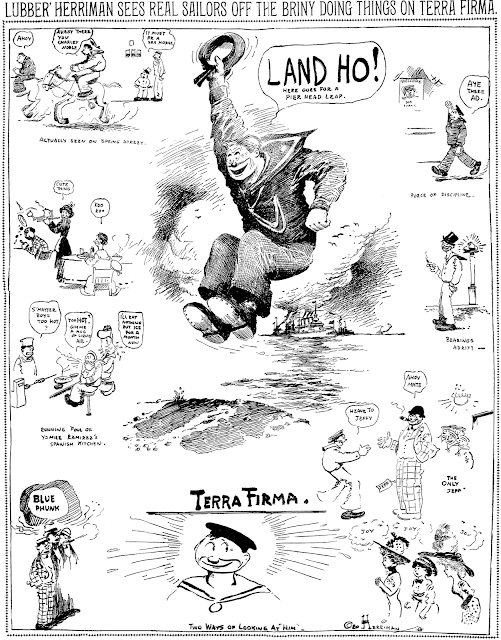 About a year and a half ago I had to discontinue our weekly Herriman Saturdays because my LA Examiner source material got packed away in a box 2000 miles away, prepped for the big move. When everything made it to my new home base and unpacking began, I soon realized that the stack of Herrimans was playing a pro game of hide-and-seek. So, here we are a year later and I just uncovered the stack in a totally unexpected box of miscellany. Well, better late than never!

As you probably do not recall, Herriman Saturday went on hiatus just as we got started on 1910, Herriman's last year at the LA Examiner. However, for our first new post, we're going to turn back the clock to 1908, because in that stack I discovered a giant full-page cartoon by Herriman that got filed out of order. So ....

April 20 1908 -- Herriman offered up a bonanza of cartoons to welcome the Great White Fleet to Los Angeles, among which was this full page of vignettes about the visiting gobs. A few notes on the subject matter:

* in the upper right you see a sailor saluting a handbill depicting 'Bob Evans'. It's not that he's a big fan of fried mush and other down-home heart attack food, but doing what comes natural when he sees the Great White Fleet's Admiral Robley D. Evans.

* upper left, "Charley Noble" was the slang term for a copper smokestack over a ship's kitchen. Why this sailor addresses his horse that way I cannot guess.

* middle top, a pier head is the outer edge of a pier or dock.

* left side, 3rd cartoon down, Herriman shills for a favorite Spanish (that is Mexican) restaurant that serves fiery spiced dishes of chili con carne. The restaurant has been tentatively IDed by others as "The Spanish Kitchen", and operated by Ismael (here corrupted as Ysmile) Ramirez.

* right side, 3rd cartoon down, Jeff is of course boxer Jim Jeffries, who figures in hundreds of Herriman cartoons, but you can be forgiven if you forgot that after this long layover.