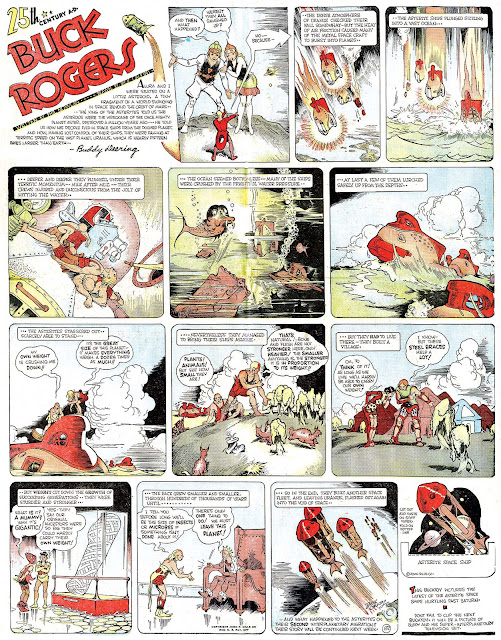 Here's the very first Buck Rogers topper (we've covered quite a few of them on the blog), this one a cut-out feature called Fold-A-Way Bucktoy. According to Buck Rogers expert Eugene Seger, this panel feature ran on the Sundays numbered 119 through 147. That translates, for papers running the strip on time, to July 3 1932 to January 15 1933.

According to my ghosting credits, all these Sundays would have been ghosted by Russell Keaton.

Comments:
I loved, and still love, the idea behind Bucktoys, those cut-out "movies" on the Popeye Sunday pages, and similar experiments in interactivity. As a kid, I once hoped to find a little tiny binder sized to hold the Crimestopper's Texbook pages. But cutting things out of newsprint except to collect was usually an exercise in futility. It was too limp to play with, and pasting onto stiff paper never quite worked out. Cereal box cardboard was vastly preferred for such things.

Hello Allan, DBenson,
I think it was a standard part of cut outs, at least in the case of most paper dolls, that an accompanying instruction to paste them on cardboard first, would be present. It would seem one would have to, lest the side flaps would be useless for making them stand.
On the other hand, the "Mechanical" creations like "Wimpy's Who's Zoo?"" would be unworkable with any backing.