From the Archives Sub-Basement: The Topper that Outlived its Parent Strip 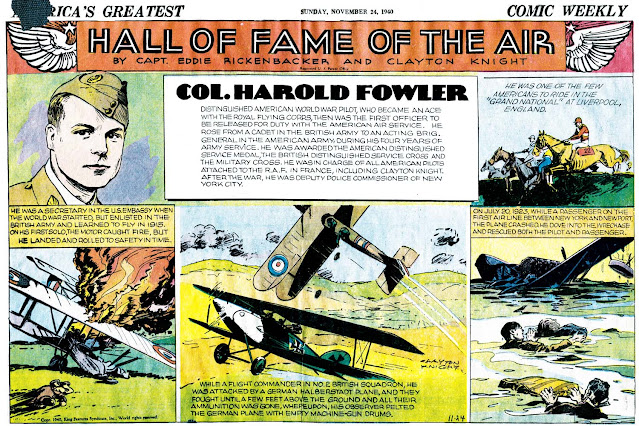 On my third post for this blog, waaaaaaay back in 2005, I showed the final strip of Ace Drummond, which ran on July 2 1939. In that post I gave Maurice Horn and Ron Goulart a little poke in the ribs for getting the end date wrong in their books. They both stated that the strip ran until 1940. A mere decade and a half later and I have just uncovered the probable reason they got it wrong.

The Ace Drummond strip was unusual in that the topper, a strip about famous fliers and their planes called Hall of Fame of the Air, was penned by a different person than the main strip. Clayton Knight, famed aviation artist, had done the art for the first two years of Ace Drummond, but then had relinquished the main strip to Royal King Cole. He did keep doing the topper, though. Maybe that's why we had a very unusual, perhaps unique, situation in which a topper outlived the main strip. It was a bit of a feather in the cap of the Puck comic section to have the well-known Clayton Knight contributing, so presumably when he volunteered to keep doing Hall of Fame of the Air they were happy to oblige.

It is a rare Puck section that ran Hall of Fame of the Air after the end of Ace Drummond, because as fine as it might be, the urge to replace a half-page strip with an ad was very strong -- Puck had lots of advertising. Luckily, I was able to purchase a scrapbook of some kid who was absolutely bonkers over this strip, and he (okay, perhaps she) managed to track down a huge number of these toppers from 1935 through 1939, and yes, even 1940. Even our HOFOTA superfan could not manage to amass a complete run, but there are quite a few 1940 installments. The latest one in the scrapbook was November 24 1940, which may not be the last that was published, but I'm guessing it is pretty darn close.

So why did Goulart and Horn get the end year of Ace Drummond wrong? My guess is that they both saw some of these 1940 Hall of Fame of the Air strips, and very reasonably assumed that Ace Drummond was still being produced, but was pre-empted by an ad in all the ones they'd seen.