Ale Ting produced the comic strip, Felix and Fink. Ale Ting was actually an advertising partnership by Chicago artists Morris Bibby Aleshire and, possibly, Horace B. Tingle, who was profiled here. American Newspaper Comics (2012) said Felix and Fink ran from October 13, 1911 to May 25, 1913, and was distributed by the North American Press Syndicate. The Catalogue of Copyright Entries, Part 1, Group 2, Pamphlets, Etc., 1911, New Series, Volume 8, Number 11, listed Felix and Fink. Another entry appeared in the Catalogue of Copyright Entries, Part 4, Works of Art, Etc., 1912, New Series, Volume 7, Number 3.
The 1912 Lakeside Annual Directory of the City of Chicago listed Ale Ting in the commercial (Advertising Agents) and residents sections which said “Ale Ting Advertising Service M B Aleshire mngr 1619, 139 N Clark”. This was how the identity of Aleshire was discovered. Ale Ting did not appear in the 1913 directory.

The Decatur Herald (Illinois), May 19, 1913, published a farewell message from Felix and Fink that said Tingle was the creator of the series. 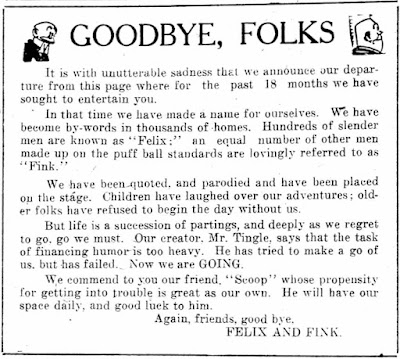 Morris Bibby Aleshire was born on January 28, 1881, in Gallipolis, Ohio, according to the Ohio, Births and Christenings Index at Ancestry.com. His parents were E. S. Aleshire and Justina Onderdouk.
The 1900 U.S. Federal Census listed Aleshire in Chicago at 675 Union Avenue where he was a roomer. His occupation was newspaper artist. Information about his art training has not been found. His address in the 1901 directory was 229  28th Street. The next year he resided at 3915 Calumet Avenue.
In 1904 Aleshire made drawings of prominent Chicagoans, which were published in “Chicagoans as We See ’em”: Cartoons and Caricatures. The 1904 Syllabus, of Northwestern University, said he was a staff artist on the Chicago American and Examiner.
From 1905 to 1907, Aleshire lived at 6246 Jackson Park Avenue. He was artist with the Journal. He worked at the Post from 1908 to 1911. His address was 1246 North State Street from 1911 to 1916. Aleshire was an advertising agent in 1913 and 1914. He resumed being an artist in 1915 and 1916.
On September 12, 1918, Aleshire signed his World War I draft card. His address was 1246 North State Street in Chicago. He worked at the Wilfred. O. Floing Company. Aleshire was described as medium height, slender build, with brown eyes and red hair.
At some point Aleshire moved to New York City. He and Kathleen Marjoribanks obtained a marriage license on December 15, 1919 in Manhattan, New York City.
A Chicago Tribune advertisement in Printers’ Ink, September 21, 1922, announced Aleshire’s return to Chicago. The Fourth Estate, October 7, 1922, reported Aleshire’s new job.

Chicago Tribune Appoints New Art Director.
Morris B. Aleshire, veteran Chicago newspaper man, has become art director of the Chicago Tribune. He has general supervision of the art activities of the editorial and business departments of the Tribune and its affiliated organizations, including the New York Daily News, P. & A. Photos, etc.
Mr. Aleshire worked on several Chicago newspapers as a reporter and cartoonist, making sketches of the events he covered. For some years he has been in the advertising business in New York. After his own company, the M. B. Aleshire Advertising Service, merged with the Wilfred O. Floing Company, he was vice-president of that concern. For the last three and a half years he has been art director of Calkins & Holden, advertising agents, New York.

When Liberty Magazine was conceived, Aleshire was named art director and moved back to New York. The 1925 New York state census said Aleshire and his wife employed a maid. They lived in Forest Hills, Queens, at 196 Burns Street.
According to the 1930 census. Aleshire and his wife were Manhattan residents at 325 East 41st Street. Aleshire was a magazine artist.
Aleshire passed away on October 27, 1931, in New York City. The Chicago Tribune, October 28, 1931, said

M. B. Aleshire Is Dead—Artist on Newspapers
Morris Bibby Aleshire, former art director of The Tribune, died in a New York hospital yesterday at the age of 50 years. An operation was performed on Friday, but he failed to rally from it Mr. Aleshire was born In Gallipolls, O. He was at one time connected with the Chicago Inter Ocean and later was art director of the Calkins & Holden Advertising agency in New York, leaving there to become art director of The Tribune. When Liberty magazine was founded, he filled the same post on its staff and had been associated lately with the New York News. He is survived by his widow, Mrs. Katherine Marjoribanks Aleshire, and by one brother, Edward Aleshire. Funeral services will be held today in New York. 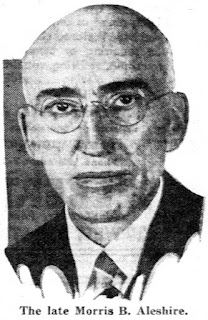 Morris Aleshire, Artist and Art Director, Dies
Morris B. Aleshire, 50, former art director of Liberty magazine and a widely known illustrator, died yesterday at the Hospital for the Ruptured and Crippled. He was taken to the hospital Friday night from his home at 325 E. 41st St. to undergo a major operation.
Resigning a position as art director for Calkins & Holden, advertising agency, Aleshire joined the staff of the Chicago Tribune in 1923 to assist in the development of the colored rotogravure process. When Liberty was started May 7, 1924, he assumed the management of the magazine’s art department. In the past several months he had illustrated many fiction stories for The News.
Aleshire is survived by his widow, Mrs. Kathleen Marjoribanks Aleshire, and a brother, Edward, who lives in Huntington, W. Va. Services will be held at 5 P. M. today in a funeral parlor at 140 E. 57th St. His body will be sent tomorrow to Gallipolis, O., his birthplace.