Dick Fletcher was born Richard Martin Steenburgh on March 8, 1916, in Moline, Illinois. According to the The Dispatch (Moline, Illinois), June 7, 1973, his mother was Bertha Elizabeth Pletscher who married John Steenburgh on March 14, 1913, in Aledo, Illinois. (The Rock Island Argus, June 11, 1913 said the marriage was on January 14.) She was an artist known professionally as Betty Fletcher who studied at the Art Institute of Chicago and Mizen Academy among others. At some point her sons adopted the Fletcher surname.
On September 12, 1918, Fletcher’s father signed his World War I draft card. His address was 2425 8-1/2 Avenue in Rock Island, Illinois. He was the credit manager at the L.S. McCabe & Co. department store.
In the 1920 U.S. Federal Census, Fletcher was the youngest of two brothers. The family of four resided in Rock Island, Illinois at 2425 8-1/2 Avenue. Fletcher’s father was a department store manager. The address was the same in the 1930 census.
Fletcher’s talent was reported in The Dispatch, May 1, 1936.

Rock Island Youth Hunts Interesting Things to Sketch
Richard Steenburgh, youthful Rock Island artist who resides at 102 Sala apartments and who has been drawing, sketching and modeling ever since he has been old enough to hold a pencil in his hands, has just one ambition: sketching and illustrating. He thinks the essentials of cartoon and caricature are finding outstanding characteristics of a person and transcribing them on a piece of paper. “You don’t have to go far away to find interesting things to sketch,” he said. “There’s a life’s work right in the tri-city' area, and I find a lot of my material in Bettendorf.” Asked what he looks for when he begins a caricature of a person, he replied: “Outstanding facial differences, teeth, the way the hair is combed, the nose and the chin. Take a look at President Roosevelt, that chin of his calls attention of the cartoonist, and with Calvin Coolidge, it was his nose.”

Information about his art training is unknown at this time.
Fletcher has not yet been found in the 1940 census. On October 16, 1940, Fletcher signed his World War II draft card. He was a Chicago, Illinois resident at 1414 North Clark Street and was employed at the Western Printing Litho Company. Fletcher’s description was five feet six inches, 172 pounds, with gray eyes and brown hair. He wore glasses with “right eye bad”. 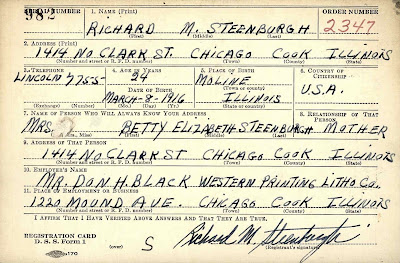 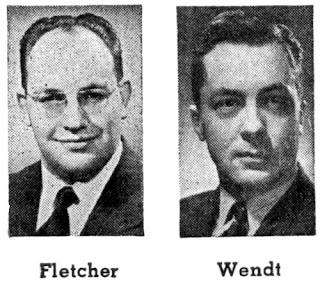 An October 28, 1950 Iowa newspaper, probably in Burlington, wrote about Fletcher and his family moving from Chicago to Burlington, Iowa at 2901 Division. (As fate would have it, Fletcher moved to the birthplace of fellow cartoonist Richard Eugene “Rick” Fletcher.)

… Fletcher’s mother is the former B. Elizabeth Pletscher of Burlington. An aunt, Mrs. Mary Lenhart, lives across the street at 2900 division.
Fletcher became interested in art through the efforts of his mother, has done various kinds of art work for a number of years, and has been connected with comic strips for about 15 years. …

The article also identified his assistants, Ray Johnson, Chuck Meyers and Paul Hodge, Jr.
The 1955 and 1960 Burlington city directories listed Fletcher as a cartoonist at 2901 Division. His spouse was Madeleine.
Fletcher’s father passed away on November 25, 1958. Fletcher’s mother passed away on June 1, 1973.
Fletcher passed away on May 21, 1992, according to the Social Security Death Index.