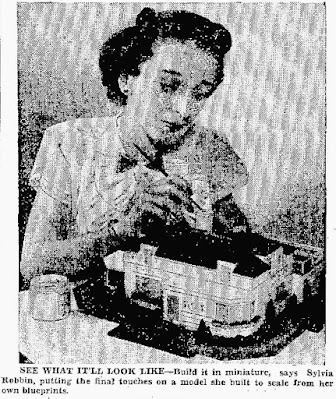 Portsmouth Herald, July 6, 1948
(This is an update of the profile posted on March 26, 2012.)
Sylvia Sneidman was born on November 16, 1909, in Baltimore, Maryland, according to East Hampton Star (New York), January 26, 1989, and a 1931 passenger list at Ancestry.com.
In the 1910 U.S. Federal Census, Sylvia was the youngest of two daughters born to Maurice and Rose. They lived in Baltimore at 2820 Parkwood Avenue. Her father was a traveling salesman.
The 1920 census said the family lived in Newport News, Virginia at 76 33rd Street.
The Sneidmans were residents of Pittsburgh, Pennsylvania, at 5821 Phillips Avenue, according to the 1930 census.
The Sun (Baltimore, Maryland), July 10, 1931, reported the Maryland Institute students, including Sylvia, had reached Europe‎. She returned from the trip on August 14, 1931, in New York City, as recorded on the passenger list.
Sylvia found work at the Pittsburgh Press. The June 20, 1934 edition published her fashion drawings. The Star (Wilmington, Delaware) published her illustration for a serial story on May 12, 1935.
Flapper Fanny Says was a daily panel created by Ethel Hays. Gladys Parker was the second artist on the series, starting March 21, 1930, which added a Sunday page. Sylvia did the daily from December 9, 1935 to June 29, 1940. The series was distributed by NEA. 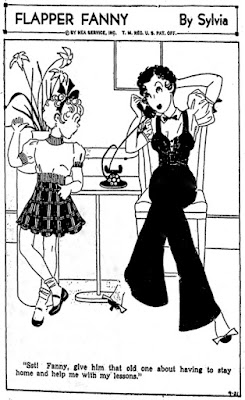 Former Pittsburgh Artist Weds in East
Mr. and Mrs. Maurice Sneidman, of Shady Ave., have announced the marriage of their daughter, Miss Sylvia Sneidman, to Dr. Sidney Robbin, son of Mr. and Mrs. Robbin of New York City. The ceremony took place yesterday in New York, where the couple will reside.
The bride is a graduate of the Maryland Institute of Art, where she was winner of a traveling scholarship on which she toured Europe. Formerly a member of the art staff of The Pittsburgh Press, she is now an artist for Newspaper Enterprise Association, handling fashion drawings and such features as “Flapper Fanny,” used daily in The Press and other newspapers. Dr. Robbin is a graduate of Johns Hopkins University.

The move to New York was an opportunity for Sylvia to join the art staff of the Associated Press (AP).
The 1940 census recorded Sylvia, her husband, and housekeeper in Jackson Heights, Queens, New York, at 3760 88th Street. In 1956 they moved to Montauk, Long island, New York.
One of her fashion drawings was printed in the Evening Leader (Corning, New York) on July 3, 1946. 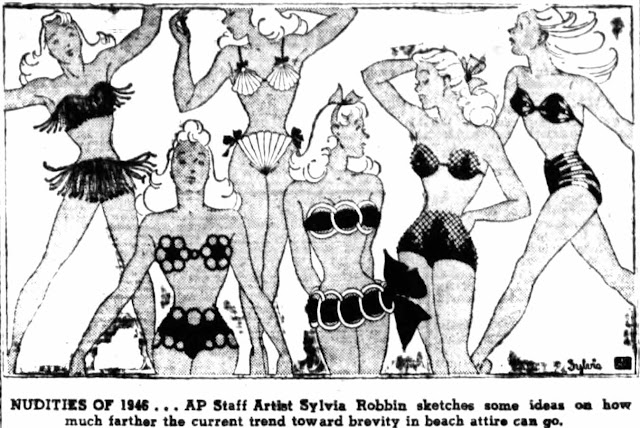 Editor and Publisher, March 1, 1947, announced Don’t Do That was available, “AP Newsfeatures has started distribution to afternoon papers of a weekly panel on personal deportment, ‘Don’t Do That’, written by Women’s Page Editor Dorothy Roe and drawn by Sylvia Robbin.” The panel began in the Jersey Journal (Jersey City, New Jersey), on April 10, 1947 (below). The series ended in the 1950s.

Below are samples of Sylvia’s art of AP material. 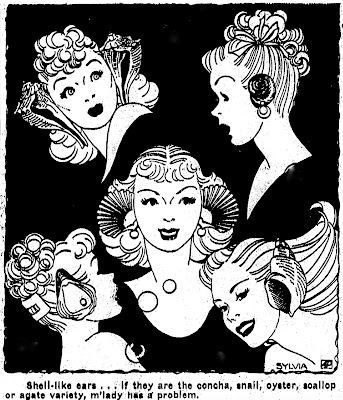 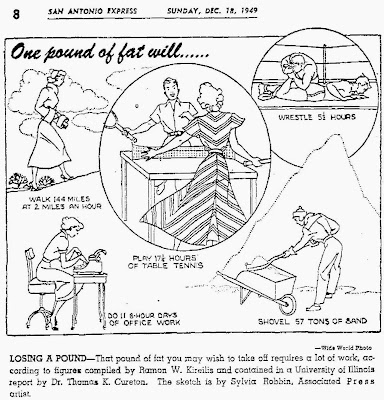 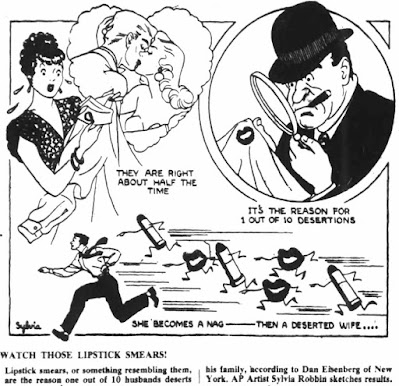 Independent-Press-Telegram, 7/7/1955
In 1950 Sylvia produced How Christmas Began for the AP.
Editor & Publisher, February 10, 1951, said the AP distributed ten health strips titled "The Latest On...", written by Alton Blakeslee and drawn by Sylvia. Editor & Publisher, March 10, 1951, announced another short feature by Sylvia, “The First Holy Week,” three-column panel drawn by Staff Artist Sylvia Robbin, is offered in six installments by AP Newsfeatures for release March 19. The test is a condensation from St. Matthew.
Sylvia produced “The Works of Christ” according to Editor & Publisher, March 22, 1952. 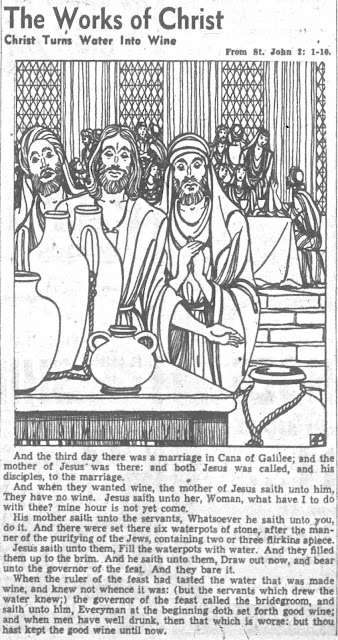 “Santa and the Flying Pup” was written by Lucrece Hudgins Beale and illustrated by Sylvia. It ran in the Evening Star (Washington, DC) from December 3 to 21, 1953.
Sylvia was featured in an AP series of do-it-yourself projects. The December 20, 1953 Lewiston Morning Tribune (Idaho) showed how she used tiles to decorate a table top.
In December 1955, Beale and Sylvia produced “Santa and the Dumdiddy”. 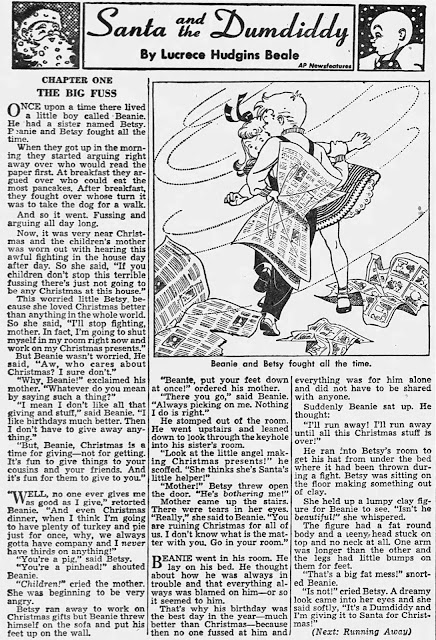 In December 1956, Beale and Sylvia produced “Santa and the Secret Room”. 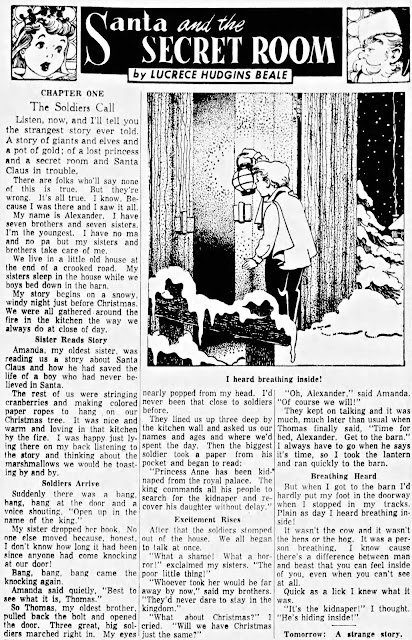 The April 27, 1959 Dispatch (Lexington, North Carolina) featured her drawing of a table and various stools made of driftwood and stone.
Sylvia contributed four illustrations (here, here, here, and here) to the second edition of the Montauk Guide and Cook Book (1959).
The East Hampton Star, December 31, 1959, mentioned Sylvia’s holiday card.

Dr. and Mrs. Sidney Robbin of Montauk send a pretty card which I think Sylvia Robbin must have designed (she is an artist) showing the Montauk peninsula complete with deer, Indians, and swans; the land in white, ponds and ocean in black dotted with snowflakes; the Light sheds its beams on land and sea; there are seagulls, a fish, and a fishing boat.

Sylvia R. Robbin, who lived on Es­sex Street in Montauk for 33 years, died Saturday at Southampton Hos­pital. She was born Nov. 16, 1909, in Baltimore, and grew up in Newport News, Va., and Pittsburgh.
Mrs. Robbin moved to Montauk in 1956 with her husband, Dr. Sidney Robbin, who set up a practice there. Dr. Robbin died in 1979. In 1942, when he became a Lieutenant Col­onel in the Army Medical Corps, his wife joined the Associated Press in New York, where she worked as a staff artist for 11 years. At that time, she also did drawings for a cartoon strip called “Flapper Fanny” in the New York World-Telegram.
She was a graduate of the Maryland Institute in Baltimore, from which she received a European scholarship in costume design.
Funeral arrangements were being made by the Williams Funeral Home, East Hampton. There were no imme­diate survivors.