Yesterday we learned that Malcolm Wheeler-Nicholson had a job in January 1925 selling for the Famous Features Syndicate. This evidently inspired him to enter the syndication business himself, and he certainly wasted no time getting right to it.

The first evidence I can find for the existence of Wheeler-Nicholson syndicating material is on July 10 1925, and this is an outlier to everything else produced by the syndicate. Here is the front page of the Camden Post-Telegram on a most historic date, the opening day of the Scopes Monkey Trial: 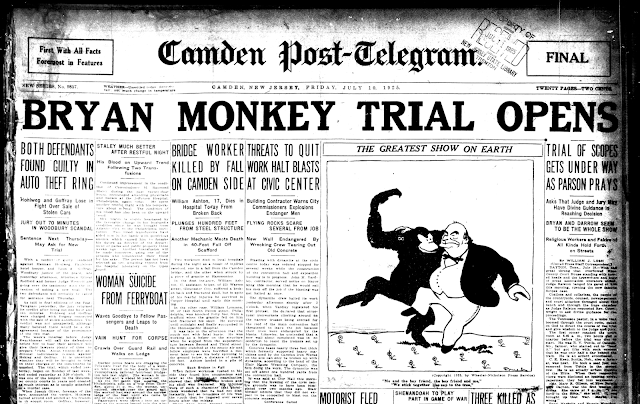 Under the editorial cartoon is a copyright slug to "Wheeler-Nicholson Press Service". The cartoon is by the famed caricaturist Al Frueh. Frueh at this time was just getting established with The New Yorker, but he was already well known; his caricatures and comics had been syndicated by the New York World since the early 1910s. How and why Frueh hooked up with Wheeler-Nicholson -- possibly for the sale of a single cartoon -- is a mystery.

As far as I can determine this one cartoon was a unique occurrence, and I cannot find any other paper that ran it, the implication being that that Wheeler-Nicholson was just testing the waters around his home base of New York City.

Did Wheeler-Nicholson offer anything else to the Post? Unfortunately, the Camden paper was quite assiduous about removing copyright slugs, so this is the only one in the paper. If Wheeler-Nicholson supplied any other material, the evidence was wiped clean.

Only one month later, Wheeler-Nicholson was ready to get serious about newspaper syndication. The following incorporation notice appeared in the New York Times  on August 26: 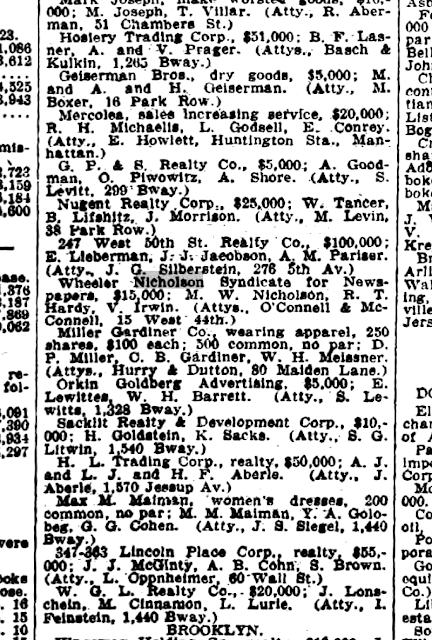 Starting a syndicate on $15,000 should not have been too hard -- that was pretty big money in 1925, probably about the equivalent of a couple hundred thousand dollars today. Since Wheeler-Nicholson himself is not known to have been a wealthy man, presumably the listed partners, R.T. Hardy and V. Irwin, were the ones with the deep pockets. Unfortunately I know nothing about them; a shame they didn't list full names.

During the same week Wheeler-Nicholson also placed an ad in the Times:

We can tell by the ad that Wheeler-Nicholson seemed to have no existing sales force, as the salesman was promised to become the sales manager in one month. That manager would likely not have had anyone to manage, though, as the company placed no further ads offering positions.

Comments:
Thanks for these blog posts about the early career about the man who would found what we know of today as DC Comics.

In theory, you could check with the New York Secretary of State's office to pull the original incorporation documents; a corporate filing service could do that for you. The fact that the corporate records are from 1925 is no block, they have all the records on micorfilm. The corporate documents would have more information on Hardy and Irwin.

Here's the information how to do it: the cost would be $5 for a plain copy. https://www.dos.ny.gov/corps/faq_copies.page.asp