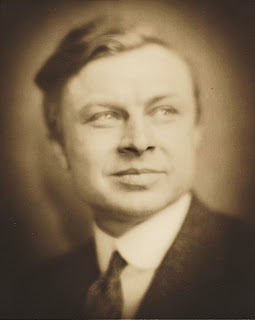 Alfred Joseph Frueh was born on September 2, 1880 in Lima, Ohio, according to birth information on a passport application and his World War I draft card which also had his full name. In the 1900 U.S. Federal Census, Frueh was the oldest of four children born to Henry, a brewer and German emigrant, and Annie, an Ohio native. The family resided in Bath, Ohio.

The New York Times, September 18, 1968, published Frueh’s reply to a 1933 questionnaire on his early life. Frueh pronounced his name “free” and said he was born on Main Street, Lima, Ohio, 1880, and brought up to be a farmer then a brewer.


Mr. Frueh once told his daughter that it was the study of Pitman shorthand in a Lima business college that aroused his interest in drawing. When he got bored in class, he would turn the Pitman symbols into faces of his teacher and fellow students. … 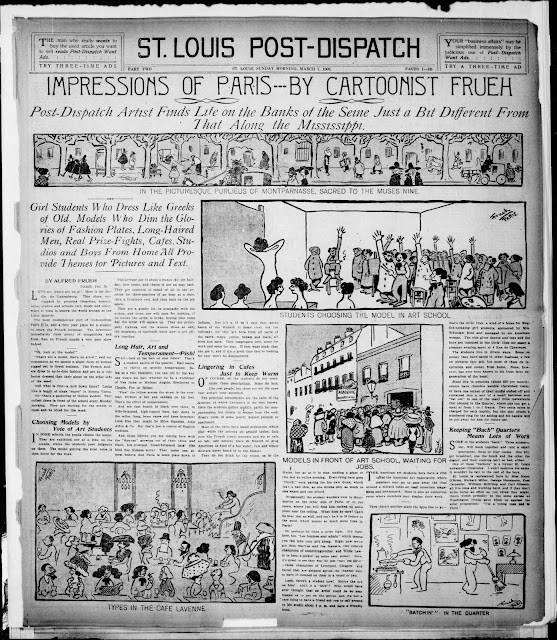 Frueh received his passport on November 16, 1908, and a second passport June 25, 1912, according to Ancestry.com. Frueh said


Announcement is made here of the marriage of Giulietta Priscilla Fanciulli, daughter of Mr. and Mrs. Francesco Fanciulli, of 128 West Fifty-eighth Street, to Alfred J. Frueh, of New York in St. Giles’s Parish, London, on June 12. The bride is the daughter of Francesco Fanciulli, musical director and composer, former leader of the United States Marine Band. Mr. Frueh is a well-known caricature artist, noted for his striking cartoons of prominent players, who came from Cincinnati and for some time was employed on one of the dally New York papers, until he went abroad for study. Mr. and Mrs. Frueh do not expect to return to this country until next year.

A passenger list recorded Frueh, his wife and five-month-old daughter, Barbara, who was born in Paris, on the S.S. La Touraine, which arrived in New York City, from Havre, France, on September 13, 1914. 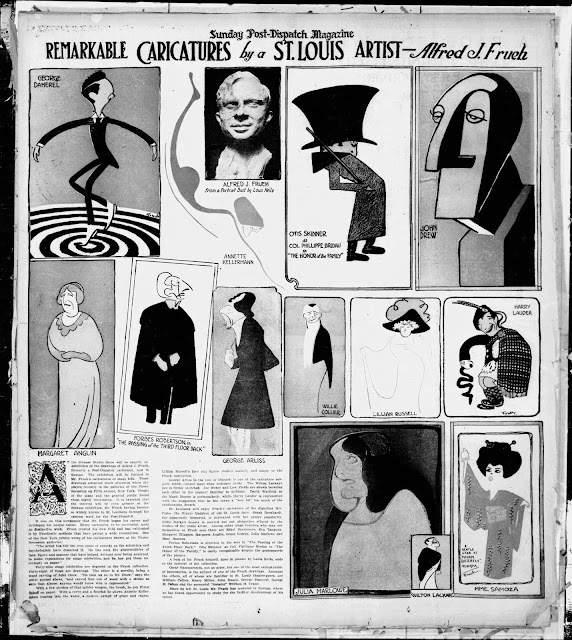 In 1915 Frueh and Irwin Leslie Gordon produced the art for The Log of the Ark. The same year saw the Evening Public Ledger feature Frueh’s cardboard animals.

Frueh illustrated Chester Cornish’s Beating ’Em to It or The Sultan and the Sausages (1917).

Frueh signed his World War I draft card on September 5, 1918. His address was 22 Maple Place in Nutley, New Jersey and his employer was the New York World. The newspaper artist was described as tall, medium build with blue eyes and light brown hair. 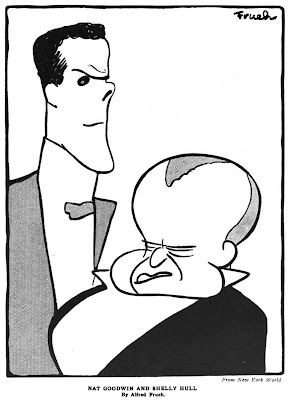 Frueh’s residence was the same in the 1920 census. His household included his wife, three children, Barbara, Robert and and Alfred, his mother-in-law, Amanda Fanciulli, and brother-in-law, Romolo Fanciulli, a newspaper journalist.

The Cambridge Guide to American Theatre (1996) said “Ohioan Alfred J. Frueh drew prolifically for the St. Louis Post-Dispatch and later for the New York World and New Yorker; his early caricatures were compiled for a book called Stage Folk (1922).”

The Times said Frueh joined The New Yorker in 1925 and the first issue had two cartoons by him. He did the cover art for the second issue. He was the magazine’s theater cartoonist to 1962.

Self-employed artist Frueh was at the same address in the 1930 census. His mother-in-law was not there.

Frueh’s mother-in-law rejoined the household in the 1940 census which recorded Frueh at the same location. Frueh’s highest level of education was the eight grade. He was a magazine cartoonist.