So far in our history we have Wheeler-Nicholson, Inc. with but a single ongoing feature  -- The Adventures of Vivian Vanity (see yesterday's post). That feature debuted at the end of September. But the syndicate wasn't standing still by any means. On October 17 they placed a small ad in Editor & Publisher. It stated that they were inaugurating a new serial story service, and the first serial would be "Wits and the Woman" by Violet Irwin. The small ad promised that each installment would also include a two-column illustration.

Unfortunately I cannot find a single paper that ran this serial, which means I also don't know who drew the illustrations, though one might reasonably say that Nick Afonsky would be a good bet. It's not all that surprising that clients didn't flock to this -- the story was published in book form in 1919, so it was probably still available in the remainder bins half a decade later.

In October the syndicate began what proved to be its most popular feature, a comic strip titled The Great Mystery and Adventure Series. The feature adapted classic stories in strip form -- not the most original idea ever hatched for a newspaper feature -- but for some reason it seemed to click with editors, at least more so than the previous Wheeler-Nicholson offerings. The popularity might have been helped by the promotion budget they put behind it. Here's a full page ad from Editor & Publisher: 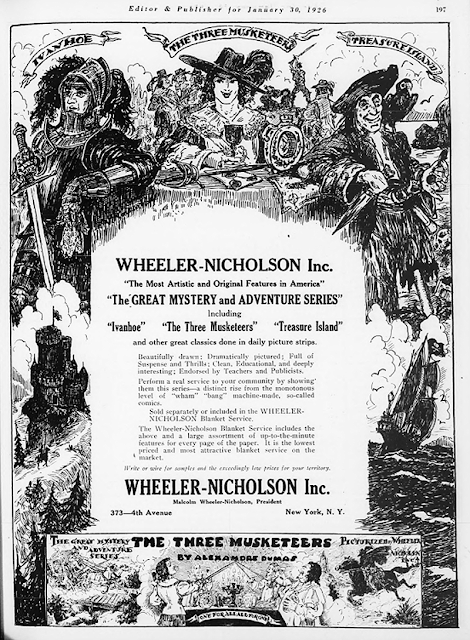 The Great Mystery and Adventure Series sported art and writing by the same pair who did Vivian Vanity -- Nicholas Afonsky (as Meetrich again) and N. Brewster Morse. As we learned yesterday, Morse jumped ship at the end of January 1926, and so afterward the adaptations were handled by Ruth Jane Williams.

Above are the first six strips of the first story, Treasure Island (not counting an intro strip which we'll see in a later post). What could have stimulated editors to buy this series? The Afonsky art is good, but the editing is non-existent. Afonsky doesn't have a clue what a cutlass looks like, and Mr. Morse uses the word "pour" when he means "pore" -- all this within the first week of the adaptation, and things will not improve later on. For the record, the strips above are restored from paper tearsheets, while all other images in this series will, unfortnately, be from digital sources.

No paper has yet been found that can offer us anywhere near a complete and unbroken run of the Great Mystery and Adventure Series, but by triangulated on a number of incomplete, out of order and sporadic runs, I've come up with what I believe might constitute a perfect run of the strip. The most puzzling thing about this series is that newspapers did not seem to run the stories in any particular order -- therefore even the order given in the following table is merely a figment of my imaginary perfect run.

That covers Wheeler-Nicholson's only series that could really be considered a success, and we're defining success here in the most modest of terms. Tomorrow we'll cover other early series from Wheeler-Nicholson.

Comments:
By chance I've just been "pouring" over my collection of Treasure Island adaptations. It was one of the favorite books of my youth. Gotta say this version doesn't excite me. Afonsky's ho-hum art is squeezed by the enormous lettering. I've wondered about newspaper strips adapting classic stories like Treasure Island. I'm sure that even in 1926 almost everyone already knew the story. I don't picture kids who didn't know it being pulled into this version because of its messy presentation. Anyway, Nick not only didn't know what a cutlass looked like, he also didn't know how to spell it.