In the waning months of 1925 Wheeler-Nicholson launched other series along with the Great Mystery and Adventure comic strip; in fact they began to advertise themselves as a 'blanket service'. What that means, in theory, is that a newspaper can pay one syndicate for access to its entire output, and it would offer the subscriber such a complete range of features that the paper would have no need to add features from other syndicates.

In the case of Wheeler-Nicholson, the term 'blanket service' seems laughable. But we cannot dismiss the concept out of hand, since the syndicate never seemed to get around to telling in their advertising just what exactly was included with their service.

So far we've seen two comic strips, a panel cartoon, and a theoretical serial story (unseen but advertised). That's certainly no blanket service by any stretch of the definition. Lucky for us, though, in October 1925 a few papers to which we have access finally took the Wheeler-Nicholson bait and began to run more of their offerings. We know they didn't use everything, because they didn't run Adventures of Vivian Vanity, but at least they give us some proof that Wheeler-Nicholson was bringing to market a wider roster of features.

A number of columns have been found in the Buffalo Sunday Express. Column features are always tough to pin down because most papers remove the copyright slugs. The Express sometimes removed slugs, sometimes didn't. Lucky for us, they occasionally left the Wheeler-Nicholson slug. For some reason they seem to have only used the W-N syndicate material on Sundays (or perhaps they were better about removing slugs on weekdays). 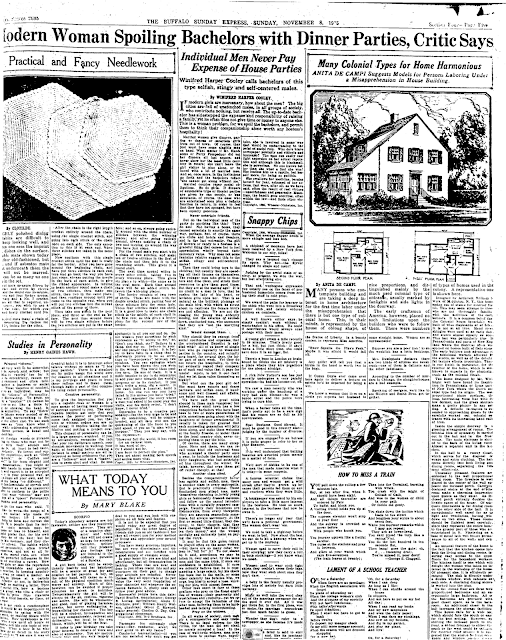 The first Wheeler-Nicholson column they used is Studies In Personality by Henry Gaines Hawn, the earliest apparance was in the October 18 1925 edition.  In this November 8 page we also have Snappy Chips, a collection of quick little one-line gags. These sorts of things were popular with newspapers for plugging small holes, they were seldom collected together like this and given a title. 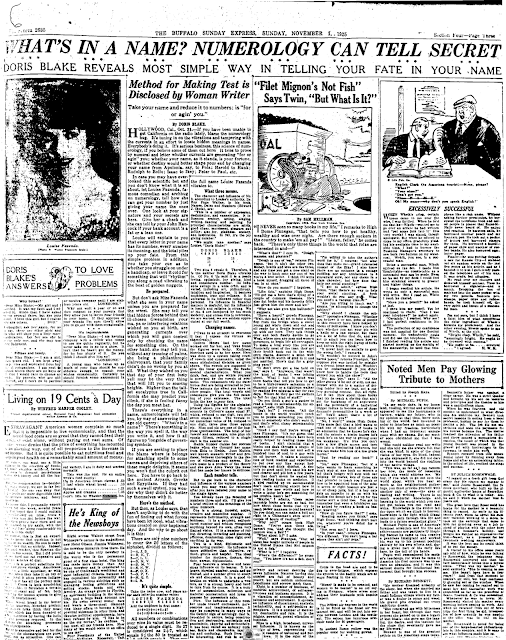 On November 1 they ran Living on 19 Cents a Day by Winfred Harper Cooley (her name is actually Winnifred, the paper got it wrong). The real name of the column may have been Practical Dietetics, which is how it was known on its one appearance in the Elmira Star-Gazette. 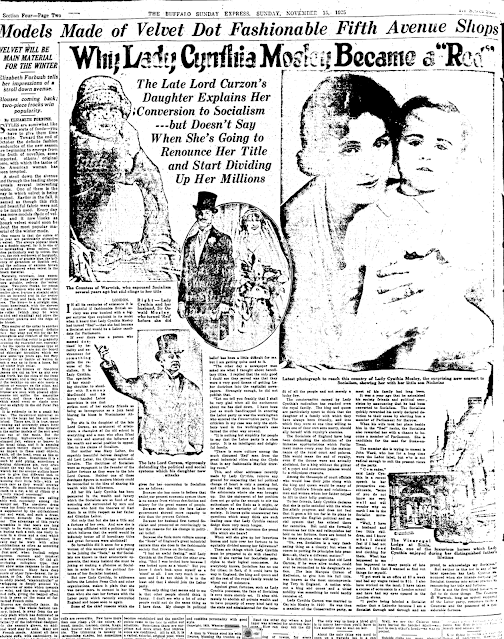 Squeezed into the corner here is a column on fashion by Elizabeth Forbush, the only one I could find  appearing in the November 15 edition. 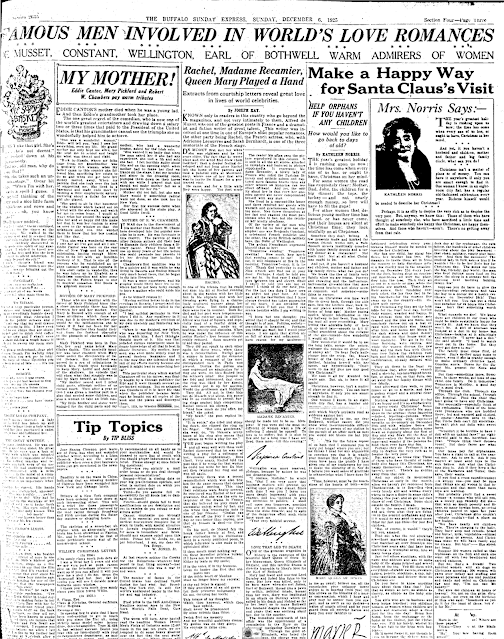 On December 6, we get samples of several columns. Tip Topics by Tip Bliss is a snarkily comedic news commentary interspersed with other theoretical humor. My Mother tells stories of the mothers of the rich and famous. This one doesn't rate a byline. Finally, there is The Scrap Basket by our comic strip writer, N. Brewster Morse. He contributes little gags, anecdotes, news commentary and poetry in an aptly named column. 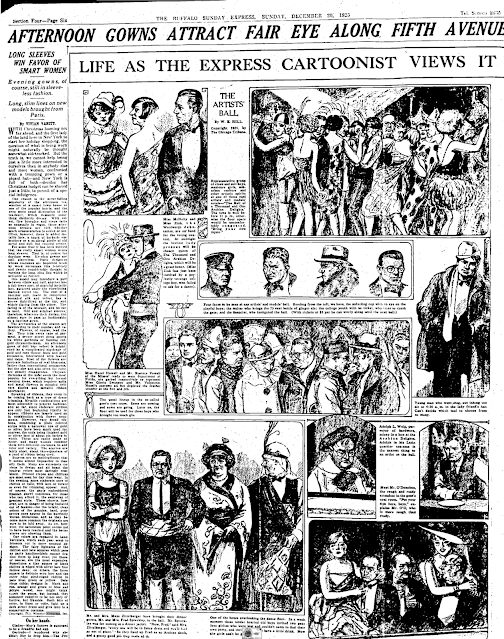 On December 20 a fashion column by our comic strip gal, Vivian Vanity, appears shoehorned in next to W.E. Hills Among Us Mortals (not a Wheeler-Nicholson product). 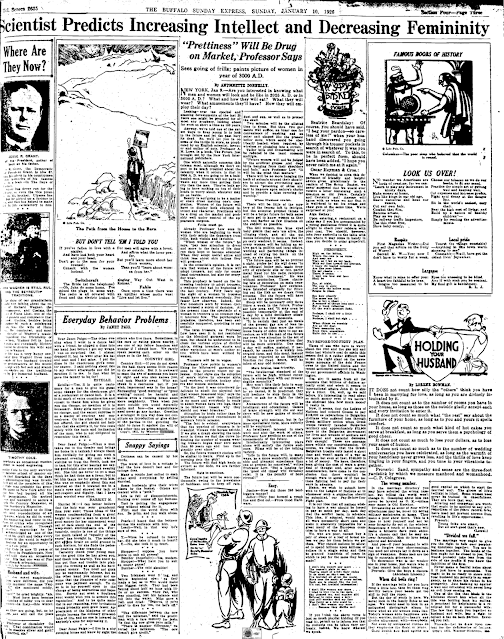 On a January 10 1926 page we have a bumper crop of Wheeler-Nicholson columns, including the already mentioned Scrap Basket. Where Are They Now? tells stories of bygone celebrities; this one doesn't rate a byline. Next there is Everyday Behavior Problems, a "Dear Abby"-style column (yes they existed long before her) credited to Janet Paige. Ms. Paige may be a pseudonym, as was often the case with these so-called 'sob sisters.' A Janet Lee Paige did byline a column called Good Housekeeping earlier in the 20s -- same writer?

Finally, there is Holding Your Husband by Lorene Bowman, a column of romantic instruction and advice; another popular subject of the era. This one sports a nicely drawn title cartoon, but I can't make out the artist signature.

In the next installment of this series (Monday) we'll finish off Wheeler-Nicholson's 1925 offerings with  some additional illustrated features; there were a few more in addition to Vivian Vanity and the Great Mystery and Adventure Series.