Yesterday we saw a list of what Wheeler-Nicholson, Inc. claimed would be in their blanket service, and an impressively long list it was. But could the syndicate actually come through on these extravagant promises?

As with most things in life, the answer is not a simple yes or no. I have been able to find quite a few of these features running in newspapers, but under circumstances that do not point toward a syndicate that was on solid footing. Most newspapers that ran the new Wheeler-Nicholson material used it in dribs and drabs, or threw a bunch of it into their pages for a week or two and then no more was to be seen.

This kind of behavior on the part of newspapers points to a simple explanation, one that I've seen happen many times. Here's the scenario: syndicate sends out a stack of samples, perhaps of one feature, perhaps of an entire roster, as promotional material to a whole bunch of papers. Some editors throw the material out, and some might well take the bait and sign up for whatever the syndicate is offering. In the middle ground, though, we have papers that, as often as not, are run on a shoestring, starved for slick  and expensive syndicated features. When they get a promo packet in the mail, it goes directly to the pressroom to be used to fill spots and add brightness. There might be no serious intention or even ability to buy the features, but in the spirit of not looking a gift horse in the mouth, those samples are going to run.

You might think this was akin to stealing, and if the promo packet says that the material is not for publication, then it is undeniably so. But in fact many of those packets sent to papers most assuredly don't say that, but just the opposite. Imagine a struggling new syndicate, sending out a bunch of unfamiliar material to newspapers all over the country. Any struggling syndicate editor, hoping desperately for new clients, who has any marketing acumen at all, is going to not only allow the editor to publish this material, but might well outright beg him to do so.

Why? Well, if you as syndicate editor really believe that the material you're sending out is the best thing since sliced bread, you are going to challenge those editors to give your material a chance. Put it in your paper, and just you wait, the clamor from your readers for more is bound to be like a Walmart on Black Friday.

Wheeler-Nicholson was sending out copies of The Syndicator to newspapers all over the country, hoping to stimulate subscriptions. The syndicate had to do this because the other option is a large traveling sales force, and we know from the Major's manifesto that he was against that method of marketing. From my searches, the result seems to have been a lot of takers on the free content among the smaller papers, and darn few papers willing to sign up for the service. In fact, on newspapers.com, where I've done most of my research, I am only confident in in identifying at least 2-3, and no more than a half-dozen, newspapers that  subscribed. Since the blanket service was supposedly offered at a bargain basement price, they needed lots more papers to subscribe.

But let's change focus now and see some of the features I was able to locate, all of which presumably came as part of the blanket service and appeared in The Syndicator.

It should be noted that while Wheeler-Nicholson said that the blanket service would start the week of July 5, all evidence points to a July 12 start, as I find nothing before then except for the couple of already running features. 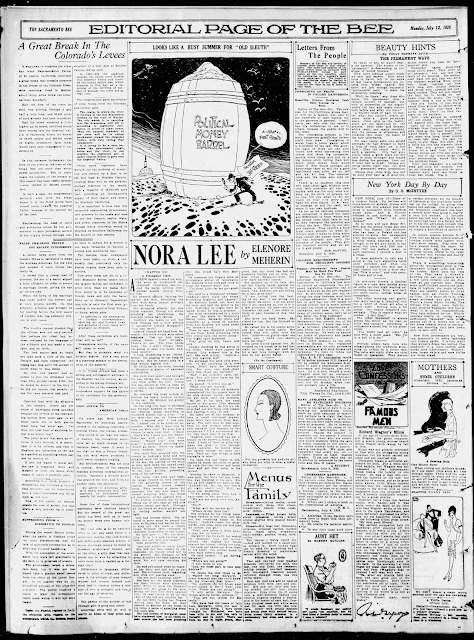 Here is a feature page from the Fresno Bee of July 12 1926. This page has two Wheeler-Nicholson offferings; Beauty Hints by Peggy Hopkins Joyce and the unbylined Love Confessions of Famous Men. The latter feature, according to the E&P listing, was by the busy typing fingers of  Joseph Kaye, who was credited with three features, and who could well have been responsible for a number of the staff-written items as well.

Peggy Hopkins Joyce was a celebrated beauty and gold-digger who was much in the news. Her name on a column would have been much more noteworthy if she had been telling tales of her romantic life. A lukewarm column of beauty hints, on the other hand, was bit of a yawn. Since Ms. Joyce was far too busy marrying and divorcing rich men, and was rumoured to be illiterate to boot, presumably this column was ghosted. Beauty Hints is last found appearing at the end of August and seemed to come three or four episodes per week, in widely varying lengths.

Joseph Kaye could be proof that Wheeler-Nicholson really did buy the Wheeler Syndicate. Kaye was churning out the same sort of features for them, as well as McClure, even while he was producing material for Wheeler-Nicholson. 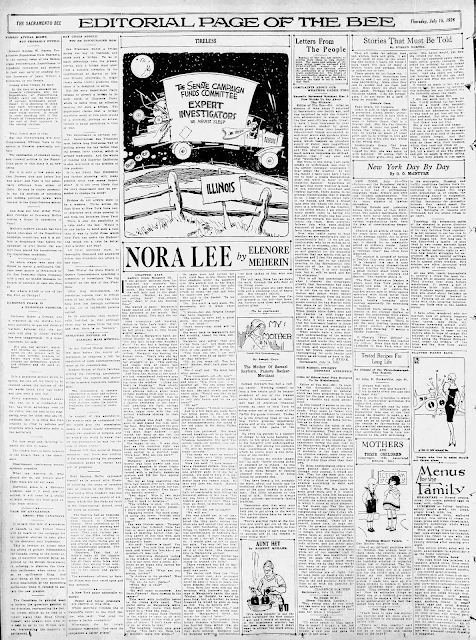 A few days later, on the 15th, we see the Bee offering three additional Wheeler-Nicholson columns. Stories that Must be Told is by Evelyn Norton, a rather smug column of instruction to women. There's also My Mother by Joseph Kaye, which is a holdover or revival from the 1925 line-up, and Tested Recipes for Long Life, offering wisdom from the famously elderly; this one is basically a quote from a public figure, so no byline necessary.

This episode of Stories that Must be Told is one of only a few I've been able to find. Either it was not liked by the subscribing papers or only a few episodes were actually offered. Given that I see this situation with a number of the features, I'm guessing that Wheeler-Nicholson had quite a few features that were more or less tryouts. Which, of course, the Major said would be part of their strategy for keeping up the highest quality, But this is the same sort of thing I saw with his 1925 features -- examples of many of the columns seem to be limited to just a few. 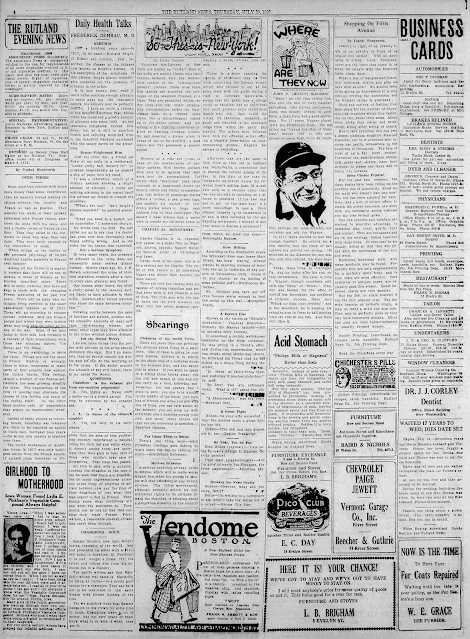 The Rutland Evening News of July 29 offers three Wheeler-Nicholson products on this page. We have Where Are They Now, another 1925 holdover, and two new features that both ended up being retitled from their announcement in E&P.

So This is New York, by William Howell "Dinky" Duncan, was advertised in E&P as Babble from Babylon. I saw the original name used a few times, but I guess they decided it might be a good idea to actually name the city that was the subject of the column. 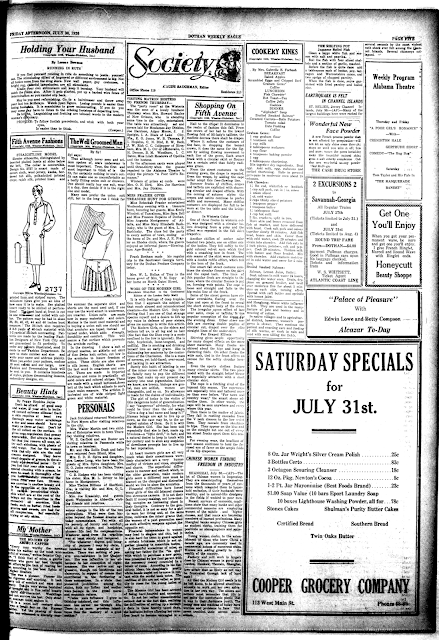 The Dothan Eagle ran a page just brimming with W-N columns on July 30 1926. We've seen Beauty Hints and My Mother before, and Holding Your Husband is one of the 1925 features.

I get a kick out of Fifth Avenue Fashions (which was not in the E&P list) because they ask readers to send off for the patterns. Unfortunately they forget to list an address to which the aspiring seamstress should send her dough.  Oopsy!

The Well-Groomed Man was listed under the title of Men's Fashions in E&P -- 'Syl' was Sylvester Martin Zinns.

Shopping on Fifth Avenue is another that wasn't in E&P; this is yet another women's fashion column. Maybe it was listed as Personality in Dress?

Last but not least, there is Cookery Kinks by Gabrielle Forbush, a recipe column. She is listed as the contributor of What Every Woman Knows in the E&P listings, but that doesn't sound likely to be the same column.

Okay, I'll call a halt now to this material on the text columns; we don't really need to cover each one, just wanted to give a flavor of the material. One last note I have to mention -- W-N offered a fiction series by Ninon Romaine, but as far as I can tell she was a well-respected concert pianist, and not a fiction writer. Could "Sylvia", the advertised title, be a translation of "Annete y Sylvia" by French writer Romaine Rolland???

Tomorrow we'll get on with the fun stuff, the comics!

Comments:
Dee-lighted by the cartelization of druggists, the attempted censorship of evolution, and the fascination with slave bracelets that ended up on Dagny Taggart's wrist in Atlas Shrugged 30 years later. They don't make newspapers like they used to!