Over the past ten installments of this series we've seen precious little in the way of comics from the Wheeler-Nicholson syndicate; we had the Great Mystery and Adventure series, Vivian Vanity in two separate series plus the panel version, and a smattering of sports-related cartoon features by Joe Archibald.

The new and improved blanket service announced no less than twenty-two features, most of which were new (eight of the listings, including a double listing of the Great Mystery and Adventures series, were  already existing features). Perhaps the most amazing thing was that the extravagant claim of all these features turned out to be, for the most part, true.

From an historian's perspective, the great thing about many of the new comic strip and panel features is that they were numbered. In spite of some of the worst possible printing quality imaginable, I was able to determine that the longest any of the new features ran was until installment #48. That means that The Syndicator, assuming that the comics were present throughout, lasted a mere eight issues, supplying material from July 12 to September 4 1926. It wouldn't be too much of a stretch to guess that Wheeler-Nicholson might have asked for eight weeks of up front material from the creators on spec. The syndicate would surely know after three months whether the new blanket service was a success, with payment to be forthcoming at that point. Which, of course, it wasn't.

Oscar Hitt was reeled in by Wheeler-Nicholson to be the bedrock on which his comics offerings were built. Hitt's syndicated cartooning career had been underway since about 1916, and he'd already worked for World Color Printing, NEA, the Chicago Herald syndicate, Hearst, the New York Graphic and McClure Syndicate. Although Hitt was an able enough cartoonist, he never seemed to be able to stick long anywhere. That probably made him easy pickings to helm a new syndicate.

Hitt was the cartoonist behind no less than four of the syndicate's new offerings, a workload that seems impossible to sustain. My guess is that he may even have contributed more, because some of the other creator names are suspiciously vague.

This one is nominally about a teenager, but father Amos pretty well takes over the strip. It's sort of a mash-up between Harold Teen and The Bungle Family. Lots of hepcat dialogue to mask that there weren't much of the way in gags.

Through tales passed down from generation to generation, there seems to be some impression that Major Wheeler-Nicholson wrote Ambitious Ambrose and another of Hitt's features, Hi-Way Henry. I see no reason to believe this because Oscar Hitt was more than capable of churning out this material, and frankly, I get the impression that the Major wasn't the sort of fellow who was comfortable writing comedy.

Next up for Hitt is his second strip, Wally and his Pals. Here are some samples, and sorry about the awful condition: 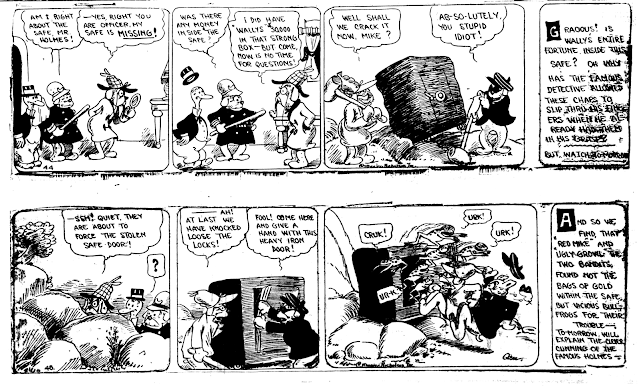 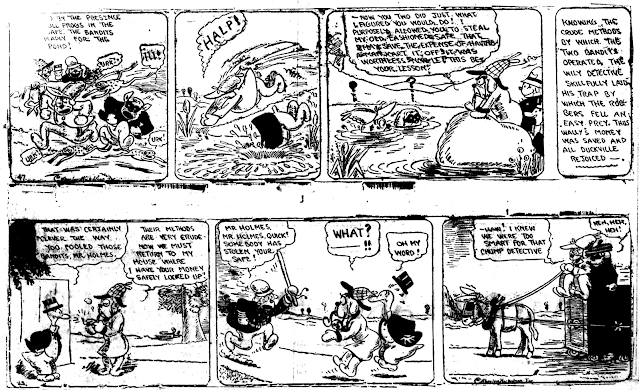 Hitt definitely considered this his 'class B' strip, because he elected to credit himself only as 'Oscar' on it. This use of pseudonyms was common at little start-up syndicates, to give customers the impression that there were more creators in the bullpen than there really were.

This funny animal strip with pretensions at melodrama was not among the advertised features in E&P, but may well be a retitling of Duckville Doings, which was advertised but never appeared. In fact, here's an example that got the original title by mistake:

This sample is different, though, in that it is not part of the ongoing story. Perhaps the storyline was dropped at times during the series?

The advertised Duckville Doings wa supposed to be by someone named Bill Bly, a name I do not know. However, there was a Bess Bly doing some newspaper cartooning in the mid-20s. Maybe Bill/Bess found out payment would be in stock certificates and decided not to participate at the last minute?

In addition to the strips, Oscar Hitt was responsible for two panel features. One of them is slightly famous; Hi-Way Henry. 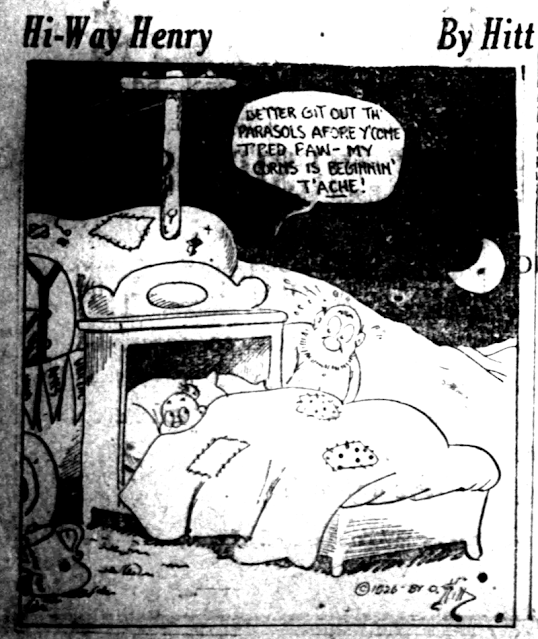 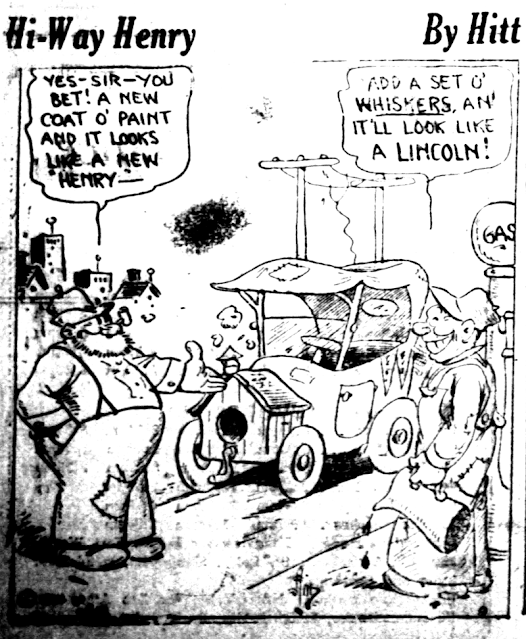 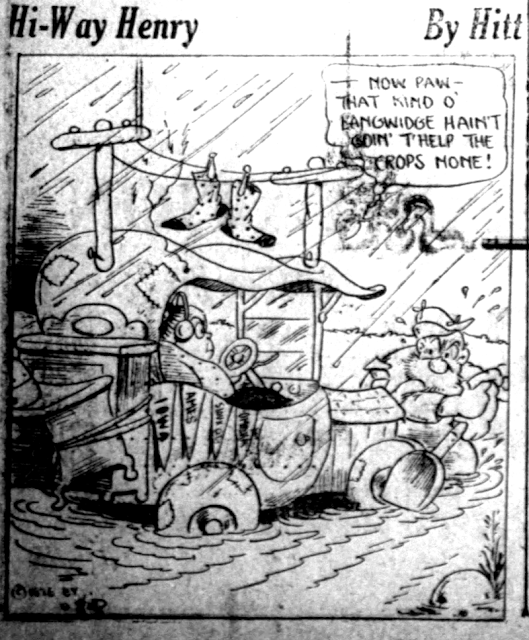 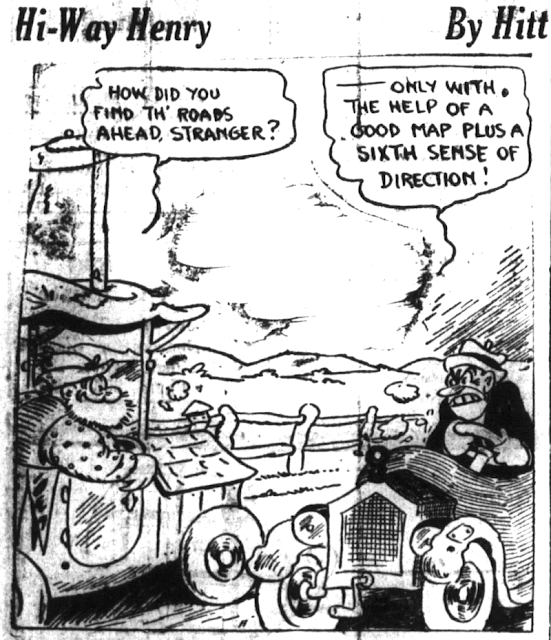 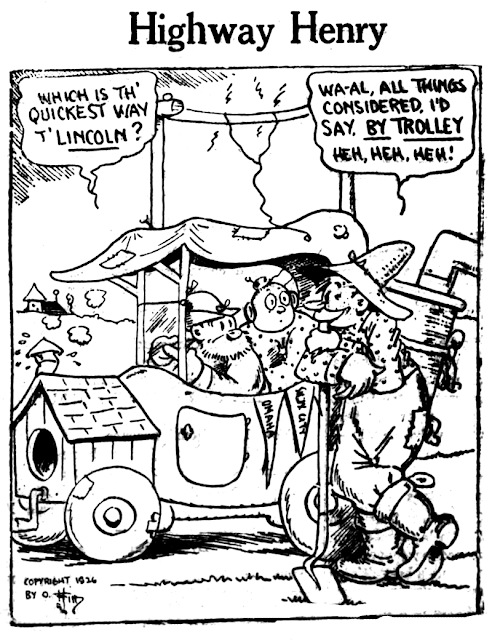 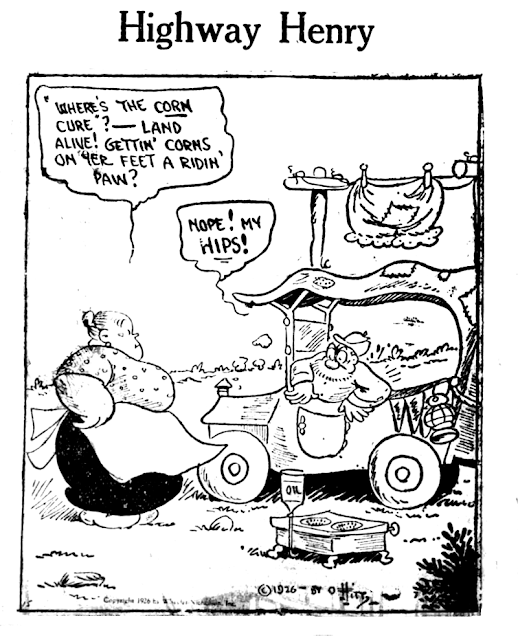 Why is Hi-Way Henry famous? Well, Oscar Hitt must have been pretty pleased with his design for a camper-jalopy Model T, and so, as you'll notice in the samples above, he retained the copyright on the cartoons.

After Hi-Way Henry's short-lived stint in a smattering of papers, Oscar took this design and made a toy and board game out of it. The toys hit stores in the 1927 Christmas season and apparently didn't set the world on fire, because they were never heard from again, but the wind-up toy sure was cool looking: 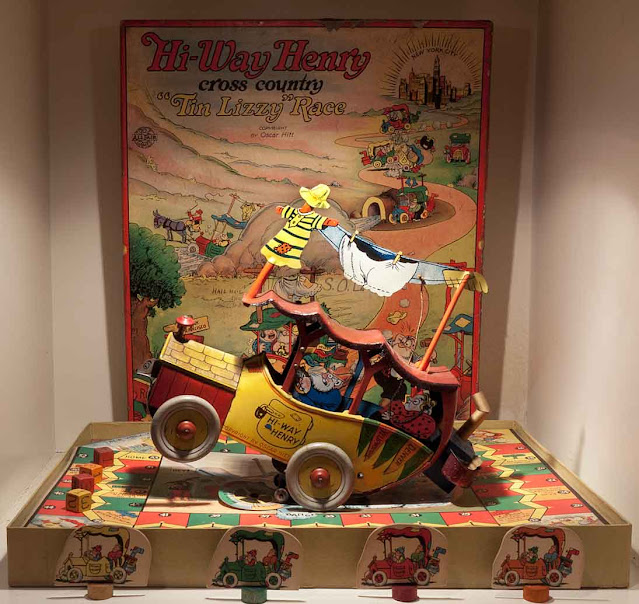 Last but not least from Hitt was a panel called Uncle Eph. This was a blatant me-too of the other popular country sage panels, like Abe Martin: 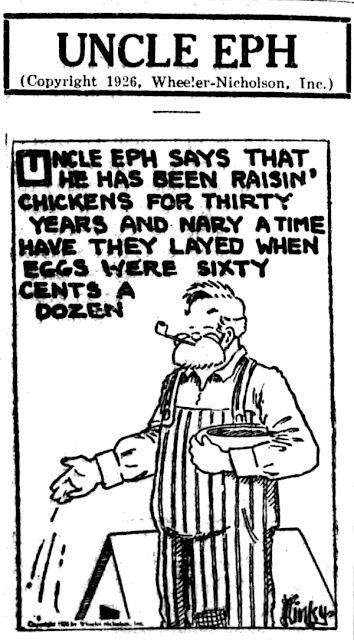 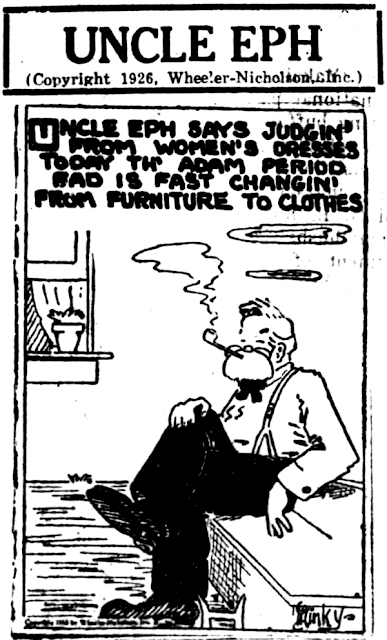 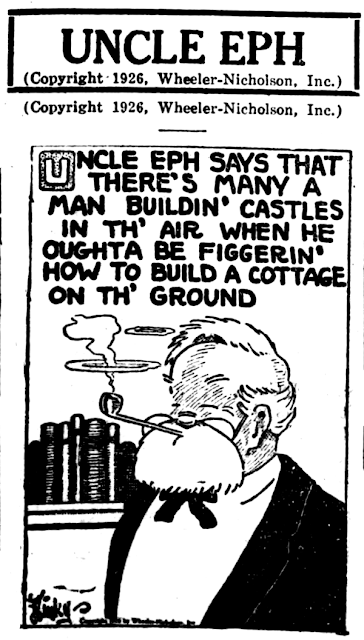 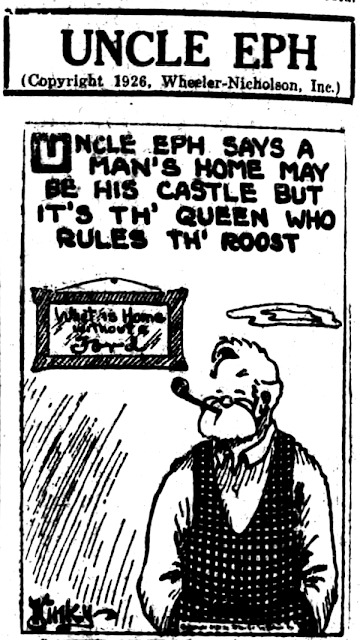 Not only did Hitt not sign this panel, but it was floridly signed "Dinky", who is William Howell "Dinky" Duncan, the writer of the Wheeler-Nicholson column This Is New York. Perhaps Duncan supplied the aphorisms, but the art sure looks like Hitt to me, and I'm sticking to the ID.

Okay, that's enough for today. We're going to break tomorrow for an updated Ink-Slinger Profile of Hitt by Alex Jay, then after that we'll be back covering more Wheeler-Nicholson features.