Today we'll cover the comic strip and panel cartoon series contributed to Wheeler-Nicholson's blanket service by M.A. Dunning. Marshall Alston Dunning might not have been the most accomplished cartoonist ever, but if we are to believe the interwebs, he certainly excelled in selling his services. If the Library of Virginia has the story right, between the 1910s and 40s Dunning lent his cartooning talents to the San Antonio Express, Akron Times, Cleveland Press, Miami News, Jacksonville Journal, San Diego Tribune, Austin American-Statesman, plus animation work at Walt Disney Studios and Columbia Pictures, and even a stint working for the Landon correspondence school. Colour me a little skeptical of the extent of this resume.

To that long list we can add Wheeler-Nicholson, Inc., for which he produced a panel cartoon and a comic strip. The panel was one of those "Guess what's about to happen" things, a genre that I generally find appealing. Dunning's work on They Never Do This But Once is quite uneven, the cartooning varying from just fine to amateurish. Dunning also showcases his *ahem* interest in ethnic humour, with lots of stereotype blacks as the butt of his jokes. The nadir of these has a KKKer in a cartoon of singularly bad taste, even for its day.

Unlike the strips, the Wheeler-Nicholson panel cartoon features weren't numbered. Although it is devilishly hard to come to any definite conclusions about these things based on the universally sporadic publication of these features, I'd be willing to bet that these panel features did not all make it to true daily frequency, even for the eight week span of The Syndicator service. 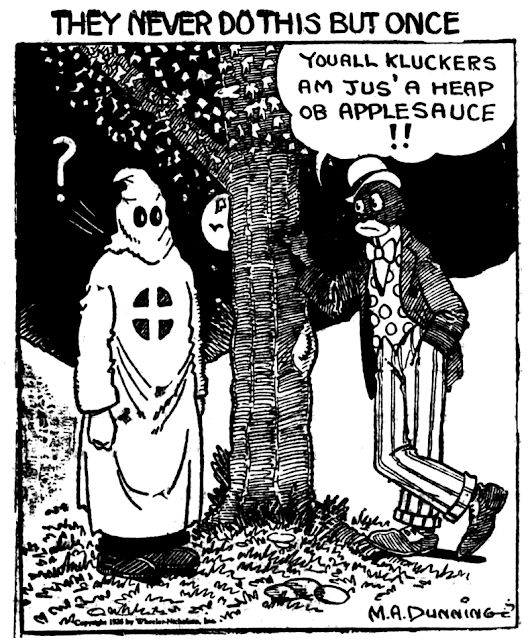 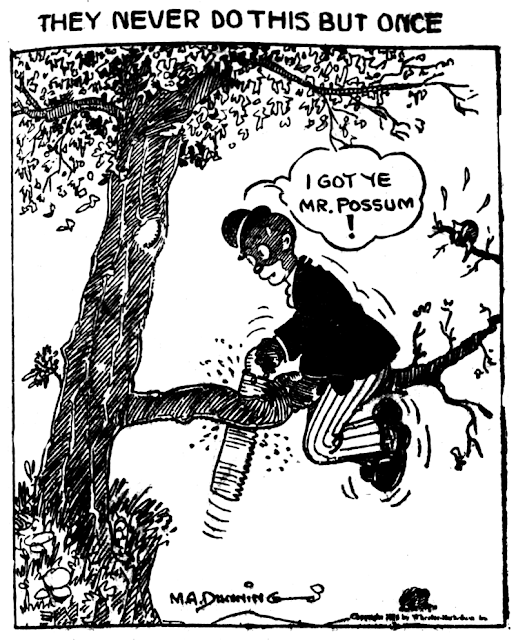 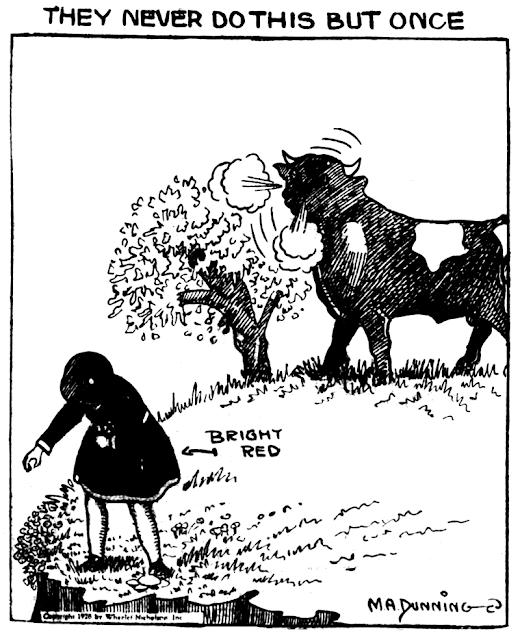 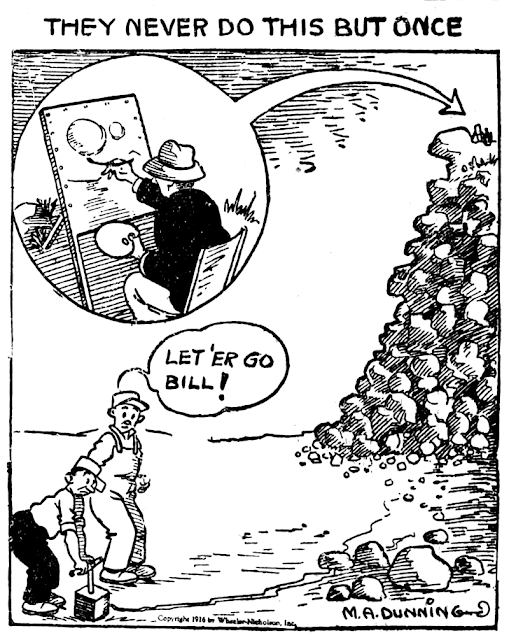 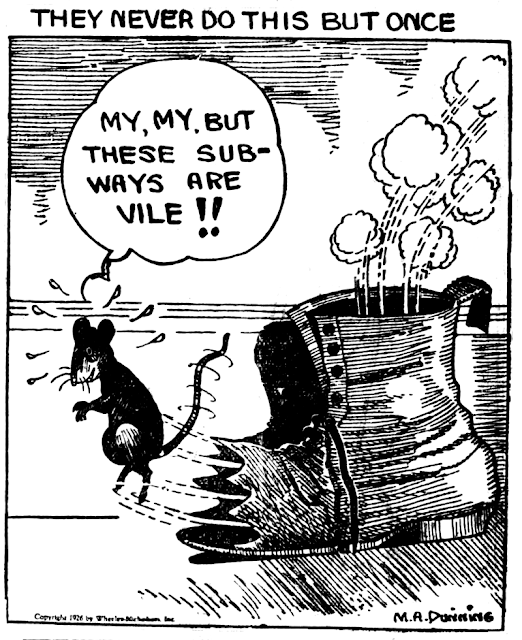 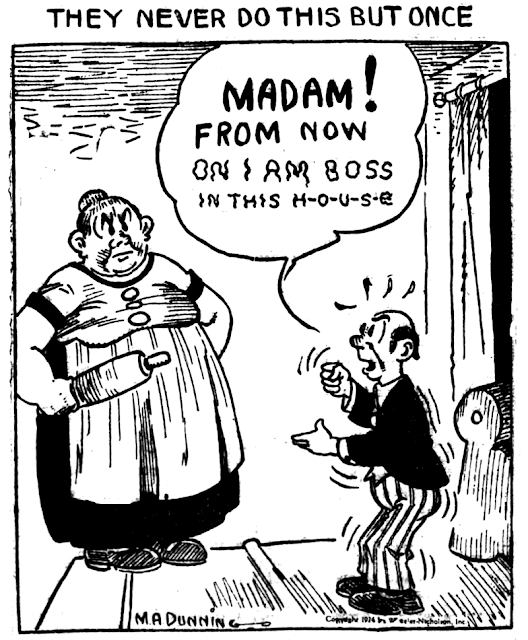 Dunning's penchant for ethnic stereotypes was showcased once again in his comic strip, this time training his sights on Jews. My jaw dropped the first time I saw the title Maggie's Yiddish Moe, which sounds more like the title of a Tijuana Bible than a comic strip for mainstream newspapers. It's pretty hard to get a sense of the plot since newspapers could not seem to manage to run this strip in anything like the intended order (I've preserved that lack of order below -- you're welcome).

I gather that Moe Kabinzie is in love with Maggie O'Day, who is a secretary to Moe's papa, a knock-off of Harry Hershfield's Abe Kabibble. I imagine in that day a romance between a Jew and an Irish Catholic would have been somewhat scandalous, but I see little of that dynamic in the strips, mostly because Dunning sends Moe off to a vacation resort for much of the storyline, so the two lovebirds seldom manage to even get in the same room. Dunning is evidently more comfortable making gags with the father, anyway,

Maggie's Yiddish Moe went unprinted by many of those who ran the Wheeler-Nicholson offerings. I  imagine most readers outside of New York City would have been mystified by the Yiddish dialect stuff, so many papers didn't bother with it. It was no great loss.

Maggie's Yiddish Moe is another Wheeler-Nicholson feature that did not make it into the E&P listings in June. My guess is that it was a late replacement for another strip they advertised that never appeared. That was Little Otto by H.T. Elmo, and as far as I know, Little Otto never made it into papers from any syndicate. 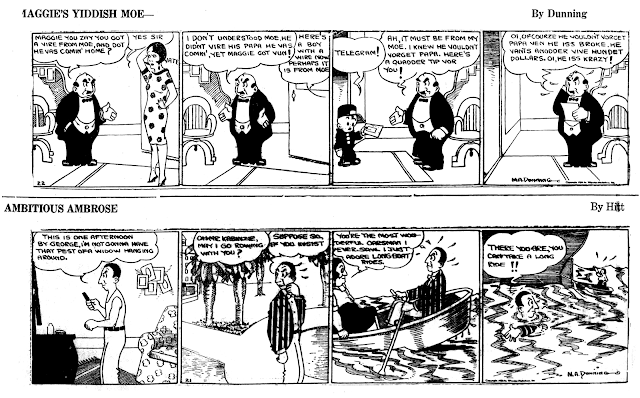 Comments:
My first thought on Maggie is that it's trying to cash in on Abie's Irish Rose.

Good catch, KF, that never even crossed my mind.

"Abie's Irish Rose" was a box office smash on Broadway; it Made Anne Nichols one of the most famous American women in the 1920s. It lead to film versions, and even knock-offs like "Kosher Kitty Kelly" and "The Shamrock and the Rose".
Evidently the mixing of the two faiths was a compelling gold mine of comedy. It exhausted itself in the 1920s, but someone thought it was worth one more shot in the misfire 1972 TV series, "Bridget Loves Bernie."

Another milking of the "Abie's Irish Rose" idea was a series of silent two-reelers, "Izzie and Lizzie". The young couple usually receded to background as their heavily stereotyped families got entangled in predictable slapstick, either as adversaries or partners.

Of course Woody Allen mined that vein in "Annie Hall". The TV series "LA Law" did mixed-marriage storylines played out by real-life couple Jill Eikenberry and Michael Tucker. Sitcoms "Anything But Love" and "Caroline in the City" teamed spunky midwestern gals with neurotic city guys, but the interfaith aspect took a back seat to the personality clash.

"The Nanny" dealt in stereotypes big time, flipping genders to pair a loud, "tacky" woman with an uptight Englishman. Again, religion was acknowledged, but it was the least of the issues between them.

I went on newspaperarchive.com and found some things to add to your excellent, erudite writeup.

Maggie’s Yiddish Moe appeared in the Taylor (Texas) Daily Press, so apparently the editors of that paper didn’t agree that non-New Yorkers would have trouble with the Yiddish dialect.

The Taylor Daily Press also often ran a page made up entirely (or almost entirely) of Wheeler-Nicholson strips. For example, page 3 of its August 12, 1926 issue contained Ambitious Ambrose, Fables in Slangwidge, On The Links, Wally And His Pals, Mike O’Kay, Why Boys Leave Home, They Never Do This But Once, and Hi-Way Henry.

They Never Do This But Once was sorta kinda daily for a brief period in the Lowell (Masschusetts) Sun. It appeared on the following dates: