Coming down to the wire here on Wheeler-Nicholson, Inc. We have only to cover three more features today, and then tomorrow a final wrap-up.

First off today we cover a real oddity (an oddity amongst oddities, I suppose). In amongst the sporadic editorial cartoons by 'Meetrich' and sports editorials by Joe Archibald, I found two cartoons by A.B. Chapin, apparently intended for op-ed pages by the syndicate even though the cartoons are clearly non-topical humour. Odder still, Chapin at this time was gainfully employed by the Autocaster Service to produce a weekly frequency feature of exactly the same sort of cartoons.

Since the Autocaster feature was a weekly, perhaps Chapin was free to shop around his wares to other syndicates as well, and I guess that could explain this. But a relatively high-profile guy like Chapin selling individual cartoons to Wheeler-Nicholson? Hmm, doesn't readily pass my smell test.

Anyway, here they are: 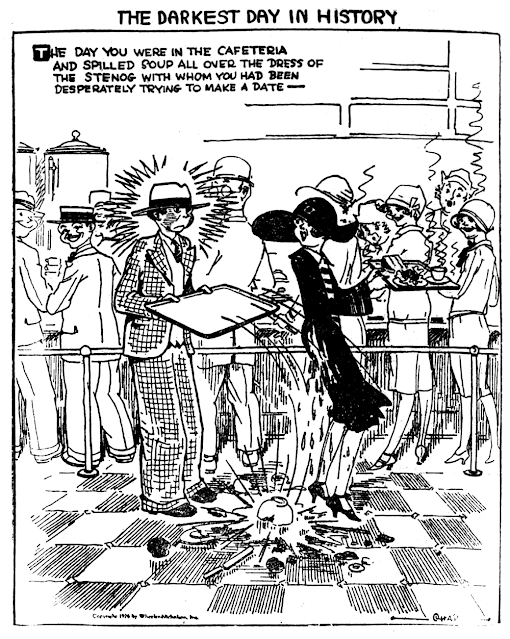 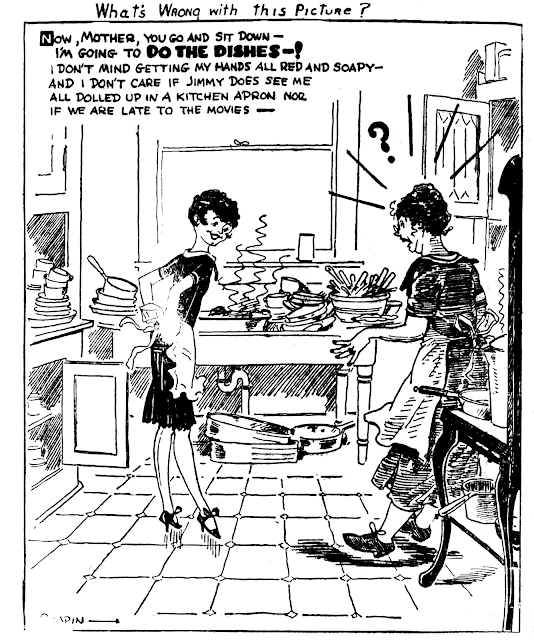 Next we have our final strip offered by Wheeler-Nicholson, called Fables in Slangwidge. Obviously the title is trading on the very popular George Ade book Fables in Slang -- to the point of copyright infringement --  and the material in this strip has got it's 1920's hipness turned up to the max.

The author of this attractive strip was Jack Wilhelm, whose delightful drawings were, at least at this point in his career, not matched by any facility in writing. These strips about the young generation of the Roaring 20's are rather painful to read. But then this is his first known cartoon feature, so he's forgiveably wet behind the ears.

The flapperdom subject really appealed to Wilhelm, and his next two features, Meet The Misses and That Certain Party, both for McClure, would be more of the same except with somewhat improved writing.

From what I can gather from the scattershot printing of Wheeler-Nicholson material, I'd guess that Fables in Slangwidge could have been a short-term series. Or perhaps I misunderstand -- maybe the reason it is seldom seen is that Wilhelm's wispy lines were really hard for these small papers to make into decent printing plates, and they often gave up. As it is, I had a heck of a time finding halfway legible samples to reproduce here; most looked like someone dumped mud all over the plates. I used to think there was only about one week's worth of this strip, but I did manage to find a sample that is numbered 24, so unless that is a red herring, the strip made it a minimum of at least four weeks: 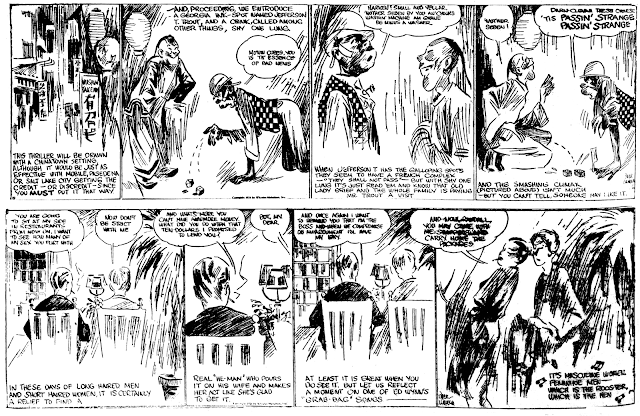 Finally, we'll cover an oddball feature that strangely enough was also the only one to outlast the syndicate. Somehow the Major got a contract for reprinting cartoons from a very minor magazine titled College Comics, the poor cousin to College Humor. These magazines established agreements to reuse cartoons from college humour magazines, a very popular campus publication genre of those days. Wheeler-Nicholson ran a selection of these cartoons each week under the banner title College Comics. The typical ration might have  been about four cartoons per week, it's hard to tell. Newspapers were free to cut the individual cartoons apart and run them separately, which many did. Here's some samples:

The interesting thing about College Comics, and the reason I left it for last, is that it did in fact outlive the syndicate. It seems that Cosmos Newspaper Syndicate liked the idea of this sort of feature. Not hard to believe since the contract presumably gives the syndicate carte blanche to reproduce as much as they want from that humour mag -- one low price for a mountain of material. So as Wheeler-Nicholson was winking out of existence, the contract for College Comics presumably got sold or leased as one of their assets, and thus was born Collegiate Fun, basically the same idea but with lots more text material. Note in the masthead the credit to Wheeler-Nicholson, and that it now states explicitly that it is by permission of College Comics magazine. This feature didn't last very long even at Cosmos, presumably because the source magazine itself succumbed in short order. 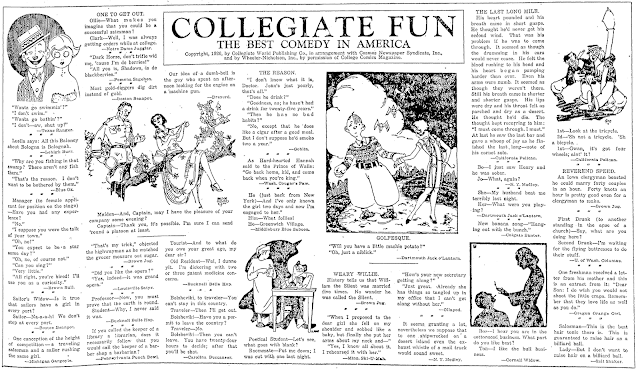 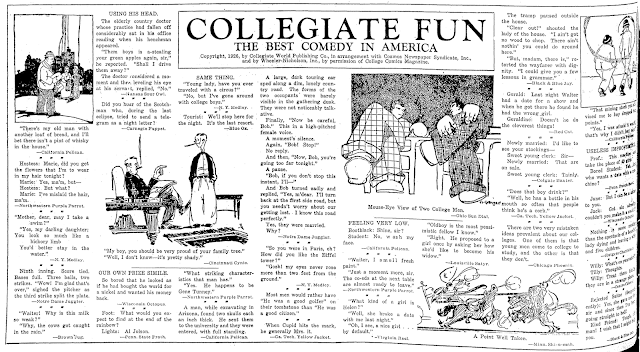 Comments:
I've got 15 Fables in Slangwidge strips that are different than the five you've posted, so there were at least 20 in total.