Walter Frehm was born Walter Friedman on March 11, 1912, in Manhattan, New York, New York, according to the New York, New York Birth Index at Ancestry.com.
In the 1915 New York state census, Frehm was the youngest of four brothers (Solomon, Paul and Herbert) born to Morris and Ethel, both Hungarian emigrants. The family of six resided in Manhattan at 19 West 118th Street. Frehm’s father was an ice cream salesman.
On December 24, 1917 Herbert passed away in Yonkers, New York.
In the 1920 census, Frehm was “Walter Friedman”. Leonard was the youngest brother. Frehm’s parents were naturalized citizens in 1900. The family lived in Yonkers, New York at 8 Fernbrook Street.
The 1925 New York State Census recorded seven people as Yonkers residents at 209 Buena Vista Avenue. Solomon’s wife was part of the household.
According to the 1930 census, the Frehm family consisted of five members: Frehm, his parents, Leonard and Paul who was a commercial artist. Their home was in Yonkers at 288 Hawthorne Avenue.
In the early 1930s, Frehm followed Paul’s footsteps and attended Pratt Institute in Brooklyn. At first he studied illustration then switched to cartooning.
The Herald Statesman (Yonkers, New York), December 11, 1936, published a legal notice stating Frehm and his brothers, Paul and Leonard, had changed their surname from Friedman to Frehm. Leonard would find work at Fleischer Studios.

Mr. and Mrs. Walter Frehm, whose wedding took place Thanksgiving Day at a quiet ceremony at the Hotel Sharon in New York, are on their honeymoon in the South. The Rev. Dr. David Hollander solemnized the marriage nuptials at 2 P. M.
The bride, who was Miss Estelle Stern, daughter of Emil Stern of 192 Hawthorne Avenue, wore a silver lame gown and a corsage of orchids.
Her attendants were Miss Jeannette Stern, her sister, and Mrs. Benjamin Zimmet. Miss Stern was in rose lame and Mrs. Zimmet in black velvet. Both wore corsages of white roses.
Paul Frehm, a brother of the bridegroom, was best man.
Mrs. Frehm was graduated from Yonkers High School and New York University. Mr. Frehm, a graduate of Pratt Institute, is the son of Mr. and Mrs. Morris Frehm of 274 Hawthorne Avenue.

The 1940 census recorded the couple in Yonkers at 199 Hawthorne Avenue. The head of the household was Frehm’s father-in-law, a widower. Also residing there was Frehm’s sister-in-law Jeannette.
On October 16, 1940 Frehm signed his World War II draft card. His address was 80 Bruce Avenue in Yonkers. Frehm said his employer was cartoonist Ken Kling who lived at 300 Central Park West, New York City. Frehm’s description was five feet eight inches, 150 pounds, with hazel eyes and brown hair. 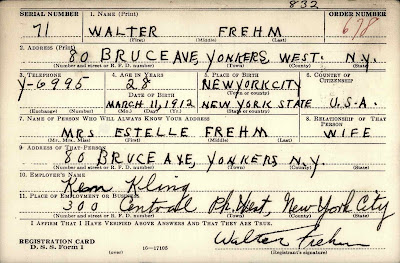 Frehm’s National Cartoonists Society profile said he assisted Will Gould on Red Barry and later ghosted Kling’s Joe and Asbestos. Who’s Who of American Comic Books 1928–1999 said he did a small amount comic book work. The Green Mask appeared in Mystery Men Comics. American Newspaper Comics (2012) said the Fox Feature Syndicate distributed The Green Mask as a Sunday strip (two comic book pages, side by side, occupied a half page), from February 7 to August 11, 1940. 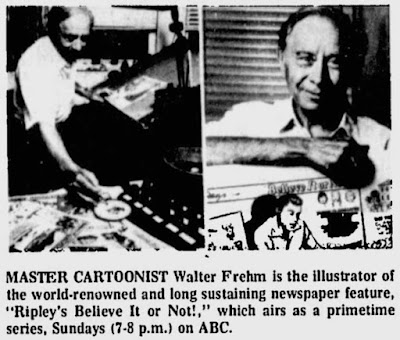 In 1958 Frehm joined King Features. The Herald-Journal (Spartanburg, South Carolina), October 17, 1982, profiled Frehm, on page eight, and said he was offered Ripley’s Believe It or Not.

Frehm’s first real encounter with Ripley was during World War II when Ripley telephoned him with the offer of a job. Frehm, however, turned down the job because he was more concerned with completing the work he was doing for the war effort. [In Suburbia Today, July 19, 1981, an article about Ripley’s Believe It or Not said Frehm was “drawing up blueprints for the bombers being built at the General Motors plant in North Tarrytown.]
It was in 1958 when Frehm’s older brother, Paul, a veteran illustrator with King Features (the copyright holder for the strip), called Walter to propose that they both draw “Ripley’s Believe or Not!” Paul had been drawing the strip with various other artists since Ripley’s death in 1949. [Suburbia Today said “… the younger Frehm was merely an assistant. Paul did the main panels—the “shock­ers”—while Walter did the lettering and drew the minor panels ….”]
For the next 20 years, the brothers faced the monumental task each week of producing at least 21 new drawings—each a new and original item in the Ripley collection of oddities. Their drawings remained faithful to the style originally created by Ripley.
Since Paul’s retirement in 1978, Walter has been drawing all the strips. “We get our items from all kinds of sources and from all over the world,” said Walter. “In fact, we have a regular list of contributors.”

In 1989 Frehm retired from the strip which was continued by others.
Frehm passed away on June 2, 1995, in Boca Raton, Florida. The Sun Sentinel published an obituary on June 9.