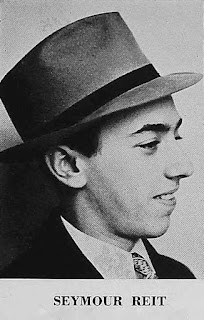 1937
Seymour Victor/Victory “Sy” Reit was born on November 11, 1918, in Manhattan, New York, New York, according to the New York, New York Birth Index at Ancestry.com.  Reit’s middle name, Victor, was found on his World War II draft card and Social Security application (transcribed at Ancestry.com). Victory was the middle name mentioned in obituaries.
Reit and his family have not yet been found in the 1920 U.S. Federal Census.
The 1925 New York state census recorded Reit, his parents, Lazarus and Mary, sister, Phyllis, and a servant in Manhattan at 725 Riverside Drive. His father was a lawyer and German emigrant.
In the 1930 census, Reit’s divorced mother was the head of the household which included Reit’s sister, maternal grandmother and aunt, and a servant. They lived in a Manhattan apartment at 317 West 93rd Street.
In 1935 Reit graduated from the DeWitt Clinton High School in the Bronx. Reit continued his education at Washington Square College, New York University, where he contributed to the school humor magazine, Varieties. 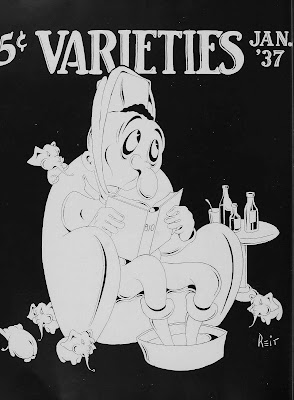 The New York Times, December 17, 2001, said Reit was 19 years old when he started at Fleischer Studios in Miami, Florida. He was an in-betweener and writer.
Reit’s father passed away December 23, 1939.
The 1940 census said Reit and Woodrow Gelman shared an apartment in Miami at 2027 SW 6th Street. They were cartoonists at a film company (Fleischer Studios). In 1939 Reit earned $1,820.
On October 16, 1940, Reit signed his World War II draft card. He was a Manhattan resident at 800 West End Avenue and employed at the comics studio, Eisner and Iger. Reit was described as five feet four inches, 115 pounds, with brown eyes and black hair. 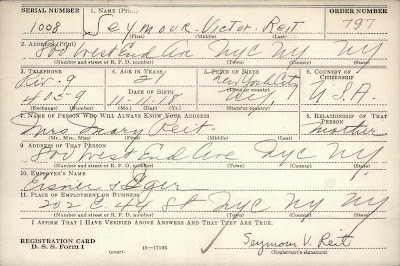 Reit enlisted in the Army on August 17, 1942. The Times said he worked in a camouflage unit on the West Coast. (In 1978 he wrote a book, Masquerade: The Amazing Camouflage Deceptions of World War II.) Reit with the Army Air Forces in Europe after D-Day. A profile in Something About the Author, Volume 21 (1980) said he was a photo-intelligence officer. After that he was on the personal staff of General Hoyt Vandenberg. A Bronze Star Medal was awarded Reit in 1945. He discharged in 1946.
RetroFan #11, November 2020, published the article, Who Created Casper the Friendly Ghost?. Two people claimed to be the creator, Joe Oriolo and Reit, who said

Joe was an associate of mine years ago, when we were both employed at the Fleischer Animation Studios in Miami. He was a fine artist and animator; however, he was not the creator of “Casper the Friendly Ghost,” Joe created the actual cartoon of the character—but the concept, series idea and plotline were mine, prior to Joe’s involvement. Joe played an important part, but I was Casper’s legit “Poppa.’” ...
“At that time,” Reit recalled, “Fleischer paid a few bucks for Popeye jokes submitted speculatively by the staff. People also tried their hands at writing short stories for use in the series called Fabletoons. One weekend I wrote a three to four-page story I titled ‘Casper the Friendly Ghost.’ The story was mine—every last word. Shortly after, I gave it to Joe Oriolo, who wanted to develop visuals, and perhaps peddle it either to the studio or to a children’s book publisher.”

While Reit served in World War II, Oriolo sold Casper to Famous Studios for a flat fee. Reit got nothing. Casper debuted in May 1945.
The New York, New York Marriage License Index said Reit and Ann Kleinman obtained a license in Manhattan on July 22, 1947.
The 1952 Catalog of Copyright Entries has an entry for Reit’s Salty the Sea Horse.
American Newspaper Comics (2012) said Reit claimed to have written the series, There Oughta Be a Law, for about eight years in the late 1950s to mid-1960s.
Reit and artist Erik Blegvad produced Where’s Willie which was a Golden Press book published in 1961. American Newspaper Comics said it was adapted into a comic strip for the McNaught Syndicate’s series, Children’s Tales. Where’s Willie ran on Sundays, January 16 and 23, 1966 and was adapted by Frank Bolle (see Billy Ireland Cartoon Library & Museum).
In the 1950s to 1970s Reit contributed to Mad magazine and comic book publishers Archie and DC.
The New Jersey Marriage Index said Reit and Edmee Busch married in July 1972 in Highland Park, New Jersey.
Reit was associated with Bank Street College in New York City. Bantam Books published the Bank Street Ready-to-Read series which was produced by Byron Preiss. Reit wrote The Rebus Bears (1989), Things That Go (1990) and A Dog’s Tale (1996). Reit also contributed to the Bank Street Book of Fantasy, Bank Street Book of Science Fiction, Bank Street Book of Creepy Tales and Bank Street Book of Mystery, which were published in 1989 by Pocket Books.
Reit passed away on November 21, 2001, in New York City.
Further Reading
The New York Times, November 25, 2001 and December 17, 2001, obituary
Something About the Author, Volume 133, 2002 obituary
Who’s Who of American Comic Books 1928–1999