Tales from the Great Book

By the 1920s, comic strips were apparently a mature enough bit of newspaper content that they could be trusted to offer serious content. This was when the story strips really got going, and factual and educational strips began to be offered and become popular with readers.

One of the last realms to be conquered was religion, but biblical stories in comic strip form began being offered in this decade, too, though not with any notable popularity. The idea with these strips seemed to be to ingratiate the newspaper with religious folks, or at least to enliven their Saturday church pages. Quite a few were tried, and some lasted many years, but none exactly set the newspaper world on fire.

No religious strip made any real dent in the syndication world until 1954, when John Lehti convinced Publishers Syndicate that his version of a bible strip would sell big. What was different about it? Well, a combination of ideas coalesced to make Tales from the Great Book a hit. First, it was a very colourful and well-drawn Sunday, not a weekly black and white strip as many had been before. Second, while scrupulously researched, Lehti picked his stories for their ability to translate into exciting graphic narratives. Third, he kept his stories short, rarely more than eight or so episodes, so that the stories moved along and didn't get bogged down in lots of speeches and philosophizing. Fourth, he told stories that weren't the endlessly repeated stuff like Adam and Eve, Noah's Ark, and so on; readers were presented with stories that many of them didn't already know. Finally, Lehti stuck to the Old Testament so that both Christians and Jews would feel comfortable with the material.

Here is the article announcing the new strip in Editor & Publisher, March 20, 1954:

Tales From The Bible For Sunday, In Color

A Sunday release from Publishers Syndicate dealing with great biblical stories is due to make its initial appearance March 21. To be done for color comics sections by John Lehti, ‘Tales from the Great Book” will deal with episodes from such stories as Samson, Joshua and the Walls of Jericho, and Daniel. Plans call for them to appear in that order. Mr. Lehti said titles beyond that re somewhat tentative.

The creator of this feature, who lives with his wife and daughter in Syosset, N. Y., did “Tommy of the Big Top” from 1946 to 1950. A member of the 104th Infantry Division during the war, and wounded in action, Mr. Lehti said he has had the idea for this work in mind for about six years.

“I’m really keyed up about this,” he said. “I’ve got a lot of biblical and archeological research under my belt, and I’m having a lot of fun doing it. The reason I wanted to do it is not just for the story value, and these stories are the basis for all literature, but to show the feelings of people and how they did things in those days — how they cooked, what they wore, what kinds of door hinges they had on their houses.”

Prior to service in World War II Mr. Lehti did. as he put, “a little of everything, but mostly advertising art.” For this new feature he said he has been doing “a lot of heavy research for the past six years.

Born in 1912, Mr. Lehti studied at the Beaux Arts Institute, the Art Students League and the National Academy of Design. Some of his New York sketches have appeared at the Modern Museum of Art. His wife is Jean Tighe, radio and television singer, and he is the grandson of Johann Gustave Lehtinen, chapel designer in Finland and later founder of one of the first Finnish language newspapers in the United States.

The style of ‘Tales from the Great Book” is clean but immensely detailed with great attention being devoted to dress, artifacts and the tools of war. 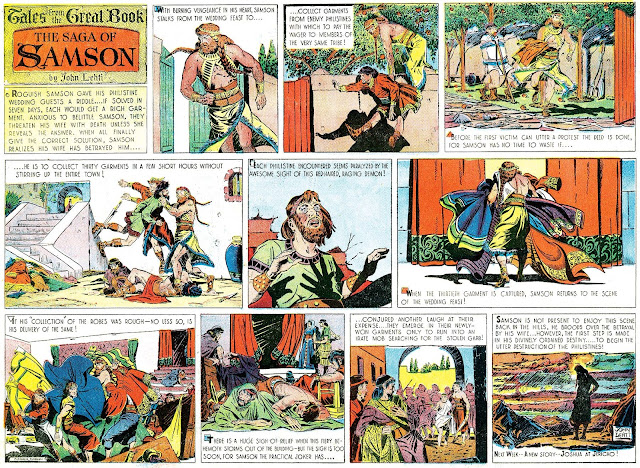 Lehti's strip was practically an instant success. It ran from March 21 1954 and ended April 16 1972. During that time Lehti's art style changed a bit, but never for the worse. It was consistently one of the most attractive strips in the comics section. He is known to have had at least one assistant, Sid Couchey.

It is unknown why Tales from the Great Book was cancelled in 1972, but Lehti still saw a clientele for it. He reworked the old material and came up with a new feature he titled Facts About the Bible; the new feature was black and white and was marketed mainly to smaller papers. According to Lehti's daughter, he prepared ten years worth of weekly material, and it was known to have been still in circulation in reprints until quite recently.

Here is a complete list of the stories serialized in Tales from the Great Book. Though several titles were reused, as far as I can tell the only story that was actually re-run was Nebuchadnezzar's Second Dream, in 1961 and '71. Apparently the end of syndication came unexpectedly, because a new story (Joshua And The Promised Land) was announced to follow Zechariah a Young Prophet.

Comments:
Is this the same guy who used to draw the Crimson Avenger and other such characters for DC Comics before the war?

Hello Allan-
This was a strip I remember well from my childhood, it was a staple of the Philadelphia Inquirer's ROTOCOMICS section, which meant it, and everything else in it, was seen in it's ideal printing, with those rich, lush colors.

Whoswhoz,this is the same Lehti. He also did a lot of work for Dell/Western, such as the "Tom Corbett" series. According to Lambiek he worked on DC's "Losers" and "Sgt Rock" in the mid-70s but that was news to me.