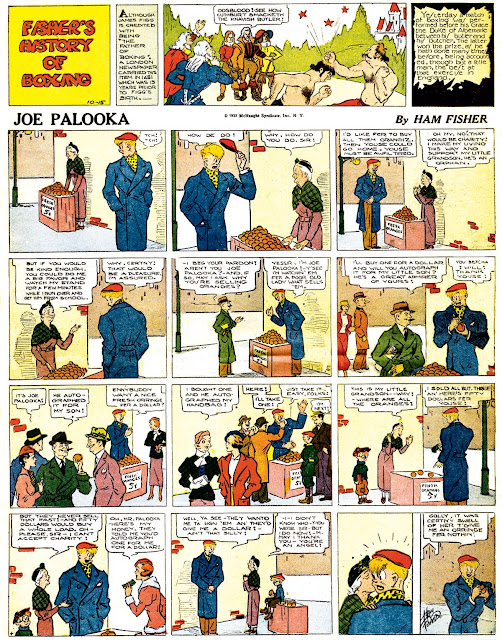 Joe Palooka had many toppers, but it was only the very luckiest Palooka fans who got to see them. The early toppers ran in both full and tabloid version of the strip, but starting in 1936, toppers began getting lopped off of certain formats. By the 1940s they were very rarely seen because they were dropped from pretty much every format except some oddball ones.

But that's as much as I'll say about that today, because today we're covering Fisher's History of Boxing, a topper that was included in the full and tab versions of the Sunday page in an era when anything less than that was relatively rare. This topper debuted on September 3 1933, and each week offered up short vignettes from (surprise, surprise) the history of boxing. The text on these strips was relatively mundane, but sometimes the drawings added a little levity to the proceedings, like in the sample above.

The strip ran for almost three years, finally ending on June 20 1936 by chronicling James J. Braddock's win over Max Baer, which happened in 1935. By 1936 the topper was no longer included with all tab formats; it was still available but the paper had to employ an extra long tabloid format to accommodate it. Fisher's History of Boxing would prove to be the last Joe Palooka topper seen by most readers of the strip, as subsequent series were used by fewer and fewer papers.