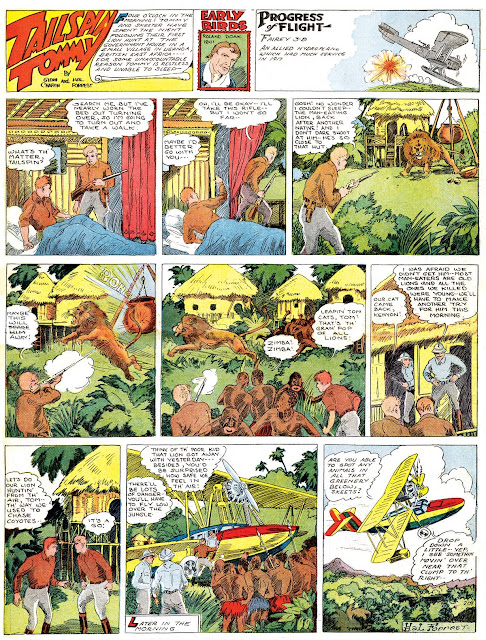 The aviation strip Tailspin Tommy would eventually be responsible for quite a few toppers, but in the early years it could only manage a single panel, titled Progress of Flight (not counting the comic stamp feature, which we here at Stripper's Guide don't deem worthy of tracking).

Tailspin Tommy was one of a long list of strips that owed its existence to Charles Lindbergh's historic flight, and despite lackluster art it was consistently one of the most popular of the genre through the 1930s. I think much of that initial success must be due to the slam-bang writing of Glenn Chaffin, which though a bit wordy, really gave flying-mad kids a strong dose of high-flying medicine. Artist Hal Forrest, on the other hand, who semed much more comfortable with doing art for humour strips, always seemed to produce terribly rushed looking work until he evidently found a good assistant in the mid-1930s.

According to a contemporary article in Editor & Publisher, the Tailspin Tommy Sunday page was added for a release date of October 6 1929. However, I've never been able to find a sample of that first page earlier than October 20. Bell Syndicate muddied the waters by allowing papers to run their strips late, making such determinations a bit of a crapshoot. Progress of Flight, a panel offering factoids about early models of airplane and famous aviators, was added with Sunday page #28; counting from October 6 1929, that would put the start date on April 13 1930, but it's not been seen appearing earlier than April 27 1930. Yes, dealing with Bell Syndicate strips can be a trying task.

Progress of Flight started it's timeline as early as you could, discussing early mythological stories of flying. The feature slowly gamboled through the Renaissance, the Montgolfier brothers, and finally to modern aviation. Early panels were numbered, but that practice eventually stopped. The feature ended with Sunday page #220, after which the top spot went to a new strip, The Four Aces.

Calculating from the supposed start date, that would put Progress of Flight ending on December 17 1933, but once again, I've not seen that occurring any earlier than the Sunday page run on December 31 1933, which seems frankly like a more auspicious date on which to usher out the old and welcome in the new. It is also the last Sunday written by Glenn Chaffin; artist Hal Forrest would be credited from then on.

If anyone can offer any direct evidence that the Tailspin Tommy Sunday began on October 6 1929 in any paper, I'd be thrilled to hear from you.

UPDATE PRIOR TO PUBLICATION: I looked at a sampling of Tailspin Tommy Sunday original art at the Heritage auction site, and I think I have the final answer. On most of the originals there is a pencil notation written outside the art area giving the strip number and publication date. The same hand seems to be responsible for other presswork notations, so I don't believe the dates were added later. In each case, the date combined with the number calculates back to a date for Sunday page #1 of October 20 1929. I'm calling this mystery solved, and saying that was the official release date; the article in Editor & Publisher had it wrong.

Comments:
Good for you Allan-you're a regular Sniffen Snoop.

Tailspin Tommy rated two serials and a run of Monogram programmers. I've seen the serials, which are both available on DVD. "Tailspin Tommy" was released in 1934 by Universal, and it may be the only serial where the hero lives with his parents and the heroine is a waitress (who has a pilot's license, but still). Tommy gets a job with a modest air freight firm up against an unscrupulous rival, but that is sometimes forgotten as the action wanders all over (a sojourn in Hollywood has him stunt flying for a WWI epic). It's a bit folksier than the usual cliffhanger. The following year brought "Tailspin Tommy and the Great Air Mystery", a more generic product with heroes and villains constantly invading and escaping from each other's camps.