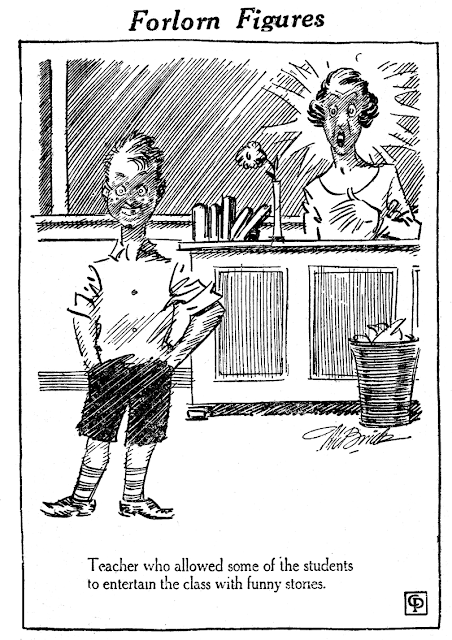 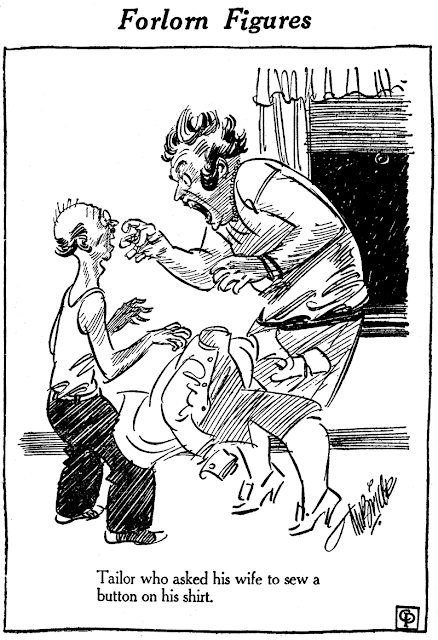 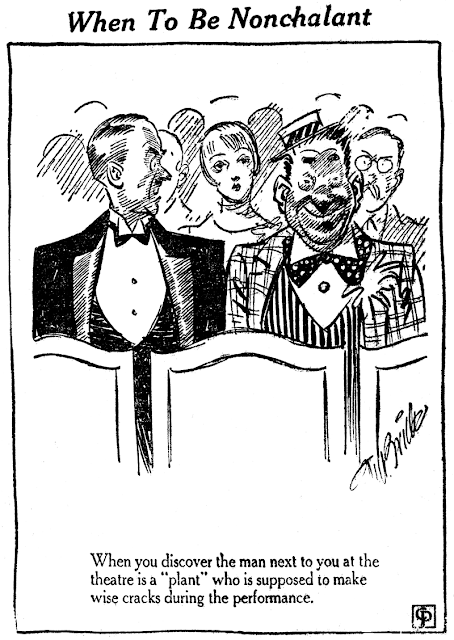 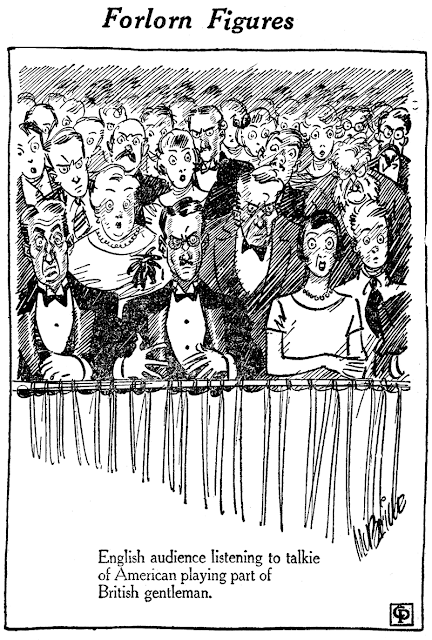 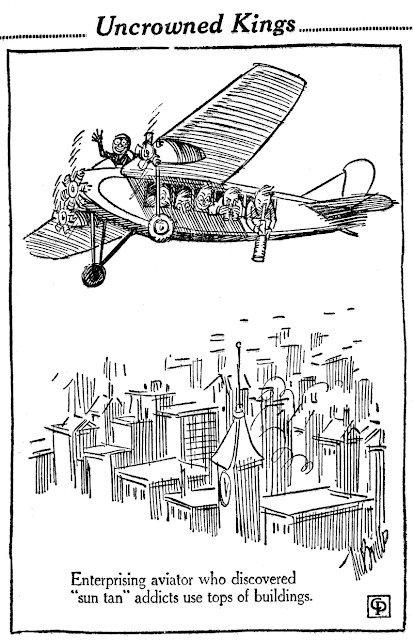 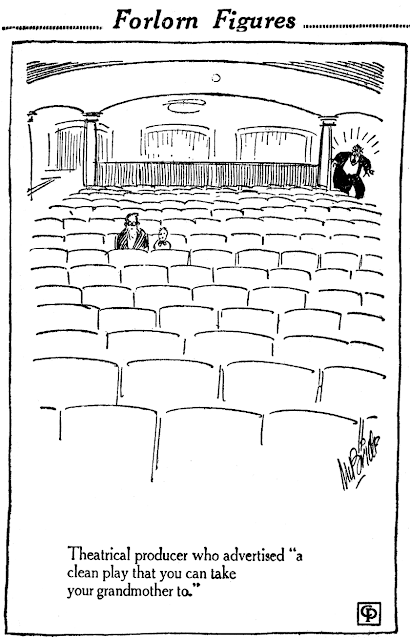 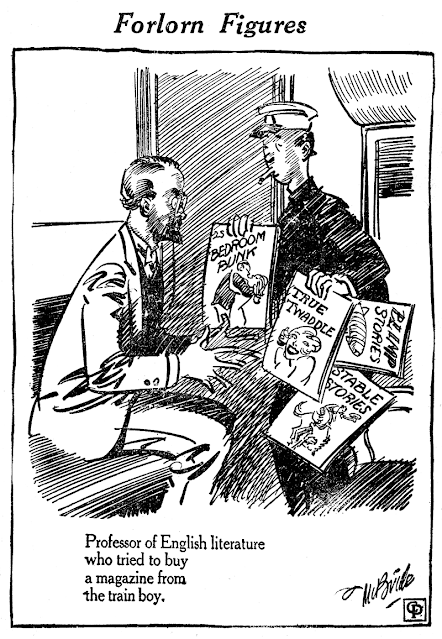 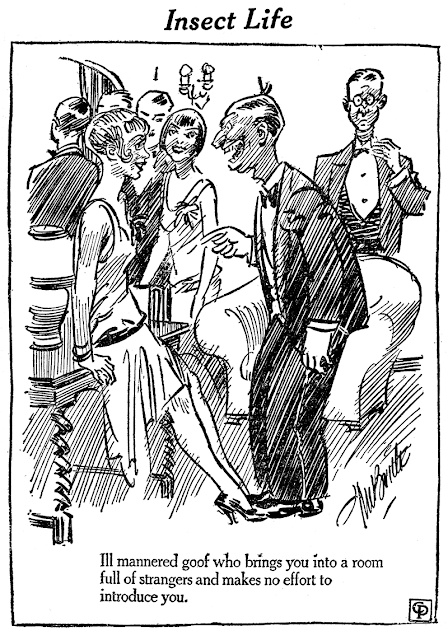 It's hard to believe that I've been doing this blog for over a decade and a half now, and some of my favorite cartoonists still haven't taken a proper bow on our little stage. Clifford McBride, a cartoonist whose sumptuous line, brilliant wit and expressive characters should have him on anyone's short list of the 20th century's greatest newspaper cartoonists, is justly famous for Napoleon and Uncle Elby, the dog strip that made him famous.

I like Napoleon just fine, but my favorite Cliff McBride ventures are the daily panel series and Sunday pantomime strip he did in the 1920s. In these he had more opportunity to spread his wings, as there were no continuing characters (well, okay, Napoleon first surfaced in the Sunday pantomime series). Free to find humour just about anywhere his fertile imagination could take him, these series were nothing short of brilliant.

Oddly, the Sunday and daily series were distributed by two different syndicates. Today I'll concentrate on the daily panel series syndicated by Central Press Association, and we'll leave the Sunday series, from McNaught, for another day -- hopefully not another fifteen or more years in the future.

McBride's daily panels had no single overarching title, but he did have a set of standard titles under which he drew regularly. Of these, the most often seen were Forlorn Figures, Insect Life, When To Be Nonchalant, and Uncrowned Kings. A few others were less often seen -- Front Page Folk and Bert and Alf (hmm, guess that's two more running characters).  These relatively generic titles were no limitation on McBride's cartoons at all; they worked for just about any situation imaginable. For instance, the bottom sample, headlined Insect Life, could just as easily have run under the title Forlorn Figures or even When To Be Nonchalant.

What is a little odd about this daily series is that the humour is quite cosmopolitan, quite sophisticated. This is a bad fit for the Central Press Association, which serviced mainly small town and rural papers. One can only wonder what the newspaper readers of Smallville made of McBride's wicked humour about urban concerns. On the other hand, the folks in those towns no longer relied on fireflies and gossip for entertainment; the movies had brought tuxedo-wearing sophisticates as close as the local movie theatre.

For some reason, Central Press decreed that McBride's panel would bear no date stamps, and for this reason many papers ran it ROP and late. That makes pinning down start and end dates more challenging. It doesn't help that E&P in its January 22 1927 issue stated that the panel would begin that month, whereas I have found enough evidence to pretty well guarantee that the actual start date is March 14 of that year.

The end date is more elusive; most papers seem to have quit running it in mid-1932 or so. But I have others running it later, albeit sporadically. My guess, though, is that the panel ended on the precise date of November 12 1932. That's because Central Press tended to have a consistent number of comic strips and panels on offer, and they started a new panel, The Tutts by Crawford Young, on Monday, November 14. I'd bet the contents of my piggy bank that means McBride was cut loose at the end of the previous week*.

Comments:
These are wonderful, as you say. They remind me of H. T. Webster. Since they've never been collected, I'd like to make my own collection out of commercially scanned newspapers. Which newspapers would you recommend for completeness / internet availability / quality of reproduction?

I see McBride died young, at 50. What happened?

According to R.C. Harvey, "McBride died of a heart attack while in the hospital being treated for prostate cancer."

To my limited understanding, advanced prostate cancer in one so young would be a rarity.