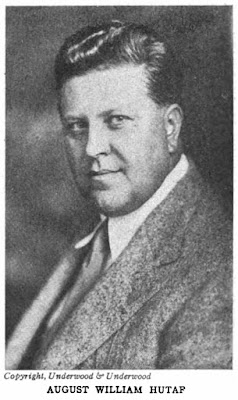 August William Hutaf was born on February 25, 1879, in Hoboken, New Jersey, according to his World War I and II draft cards and Social Security application. His parents were Herman A. Hutaf, a German emigrant, and Wilhelmina Poppe, a New York native.
The 1880 U.S. Federal Census recorded Hutaf and his parents in Hoboken at 116 Bloomfield Street. His father was a porter.
According to the 1900 census, Hutaf, his parents and maternal grandmother resided in Jersey City, New Jersey at 213 Handcock Avenue. Hutaf was a letter painter or sign writer. Information about his art training has not been found.
American Newspaper Comics (2012) said Hutaf drew four series for the New York World. Superstitious Smith ran from November 22, 1903 to April 14, 1904. Hutaf drew Fun in the Zoo from November 13 to December 25, 1904. The series was continued by Charles W. Kahles, from February 26 to July 23, 1905. In 1908 Just Truck had a short run from August 14 to 29. For the New York World’s Press Publishing, Hutaf produced the panel Wild Life Limericks, in 1917. Also in the 1900s, Hutaf produced a large number of postcards here, here, here and here.
The New Jersey Marriage Index, at Ancestry.com, said Hutaf married Jennie Barnes in 1904. At some point they moved.
Hutaf was a Mason.
The 1910 census said the couple resided in Norwood, Ohio at 2219 Hudson Avenue. He was an artist at a lithography company.
Printers’ Ink, December 10, 1914, said Hutaf was the art director at the A. M. Briggs Company, official poster solicitors.
The 1915 New Jersey state census listed artist Hutaf and his wife in Weehawken, New Jersey at 785 Boulevard East.
Hutaf was a member of the Society of Illustrators and the Dutch Treat Club. 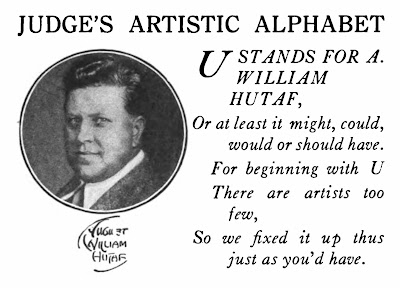 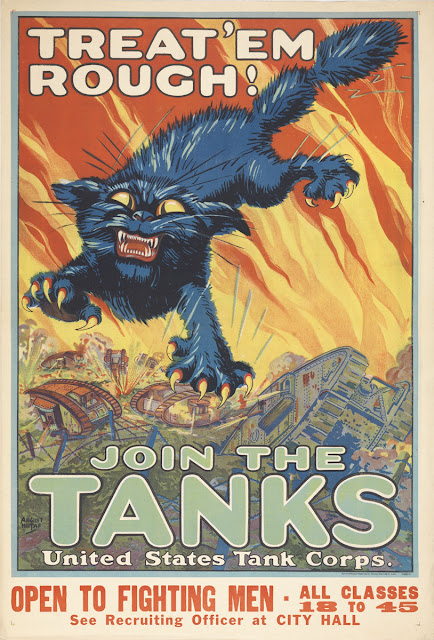 Art by Hutaf
Hutaf signed his World War I draft card on September 12, 1918. His address was 1 31st Street in North Bergen, New Jersey. He was a self-employed commercial and poster artist. Hutaf was described as tall, stout build, with blue eyes and light hair.
The same address was in the 1920 census and advertising artist Hutaf owned the house. The 1930 census said it was valued at $20,000.
Printers’ Ink, June 23, 1921, said

August W. Hutaf is now associated with the Ivan B. Nordhem Company, of New York, outdoor advertising . Mr. Hutaf has bee vice-president of Einson Litho., Inc., and was formerly art director of the United States printing and Lithograph Company of the William H. Rankin Co.

The 1940 census said Hutaf had been a resident of Weehawken, New Jersey in 1935. Hutaf suffered some kind of breakdown and was a patient at the Hospital for Mental Diseases in Secaucus, New Jersey. The census said his highest level of education was the eighth grade. It’s not known when he was released.
On April 27, 1942, Hutaf signed his World War II draft card. He was with his wife at 225 78th Street in North Bergen, New Jersey. His description was six feet one-and-a-half inches tall, 230 pounds, blue eyes and gray hair.
Hutaf passed away on October 28, 1942, in Hoboken.
Further Reading
The National Magazine, December 1916
Grand Lodge of British Columbia and Yukon
Fine Arts Museums of San Francisco