Joseph Haskell “Joe” Irving was born Isaac Cohen on August 3, 1898, in Berlad, Romania, according to his naturalization applications, Declaration of Intent (1926) and Petition for Citizenship (1931). A passenger list, at Ancestry.com, listed Irving as “Isaak Cohn” who traveled with his mother “Adela” and sister, “Sofia”. They were Romanian emigrants who sailed, October 19, 1901, from Antwerp, Belgium, and arrived in the port of New York on October 29.
In the 1905 New York state census, the Cohen family lived in Manhattan at 386 East 10th Street. Irving’s mother was an operator.
The 1910 census recorded the Cohens in Denver, Colorado, at 2096 Washington Street, where they lived with Samuel Babst, a pharmacist who was Irving’s maternal uncle.
On March 29, 1914, Irving’s sister, Sophie Cohen, married Mayer Abrams in in Chicago, Illinois.
The 1915 New York state census said Mayer “Abrahams” (a dry goods proprietor), his wife, son and mother-in-law lived in Brooklyn at 1483 Lincoln Place. Irving has not been found in the this census.
On September 12, 1918, Irving signed his World War I draft card. His address was 1530 Webster Avenue in the Bronx. His birth date, August 1, 1899, does not match the dates on his naturalization documents. Irving named his mother as next of kin. She resided in the Bronx at 826 East 167th Street; the same address was in the 1920 census. Irving was a freelance artist. Information about his art training has not been found. 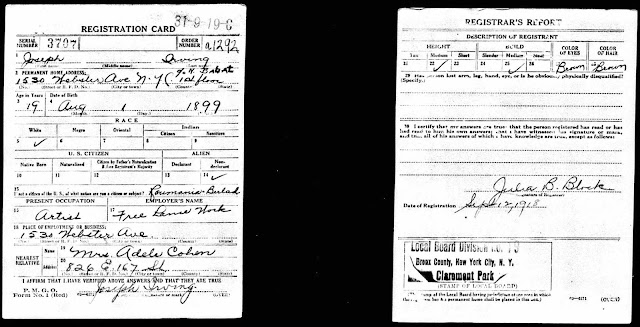 Irving has not yet been found in the 1920 census and 1925 New York state census. His mother, who remarried in 1922, and sister resided in the Bronx. His brother-in-law was an embroidery manufacturer.
Montague Glass (1877–1934) was a lawyer turned writer. He created the popular characters, Potash and Perlmutter, who were adapted into stage, radio and film productions. Many of the Potash and Perlmutter newspaper stories were illustrated by Moe Zayas (1913), Foster M. Follet (1918), Harry J. Westerman (1918), Albert Levering (1919–192?), Milt Morris (1924) and Irving (below). 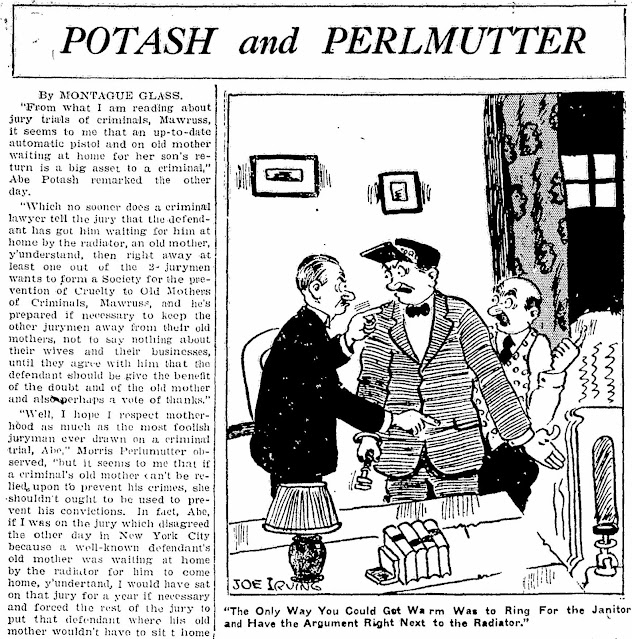 Tarrytown Daily News 4/9/1927
American Newspaper Comics (2012) said Irving drew the strip Potash and Perlmutter which debuted on September 13, 1926. His last signed strip appeared on July 16, 1927. The strip continued unsigned to August 13, 1927. It was distributed by the Bell Syndicate 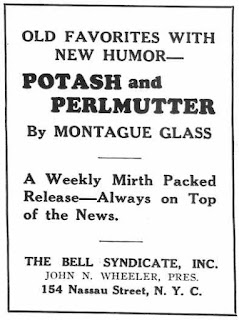 Editor & Publisher 6/5/1926
The strip ran in the Tarrytown Daily News (New York) from April 16 to August 13, 1927.
Irving took the first step to becoming a naturalized citizen. He filed a Declaration of Intent on May 28, 1926. The application had his full name, Joseph Haskell Irving, and birth name, Isaac Cohen. His occupation was manufacturer, so he may have been working for his brother-in-law. 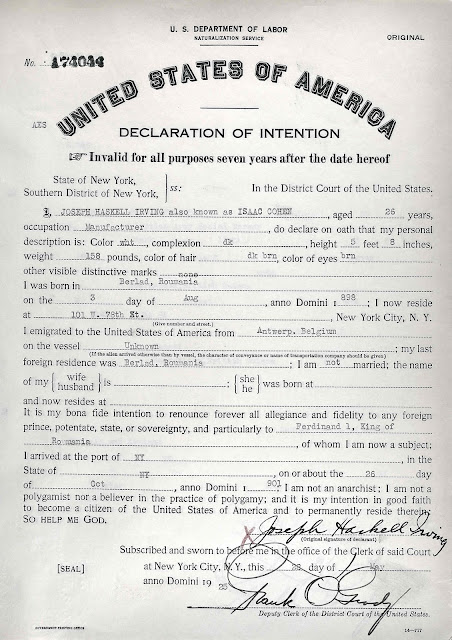 According to the 1930 census, Irving was in his brother-in-law’s household which included Irving’s mother, sister, nephew and niece. They resided in the Bronx at 1555 Featherbed Lane. Irving was a furniture salesman and his brother-in-law, Mayer, was the proprietor of art goods. On February 8, 1939 Mayer committed suicide when he jumped from the window of his Bronx home at 1065 Jerome Avenue.
Irving’s sister was the head of the household in the 1940 census. Irving, who became a naturalized citizen on August 13, 1931, lived with her, his mother and niece in the Bronx at 1081 Jerome Avenue. His nephew had passed away October 8, 1934. Irving was a furniture salesman who earned $5,000 in 1939. His education included four years of high school.
Irving signed his World War II draft card on February 15, 1942. His address was the same. He was employed by the Stockline Furniture Corporation. Irving’s description was five feet eight-and-a-half inches, 185 pounds, with brown eyes and gray hair. 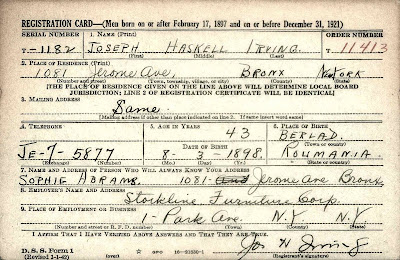 The Board of Elections in the City of New York, Borough of the Bronx, List of Enrolled Voters for the Year 1950–1951, had this listing, “Irving, Joseph H, 1081 Jerome ave - D”.
An obituary or death notice for Irving has not been found. His sister passed away in Brooklyn in March 1975.
Further Reading
Bourbon News (Paris, Kentucky)
September 8, 1914: Something About Montague Glass
American Jewish World (Minneapolis, Minnesota)
October 1, 1915: Potash and Perlmutter