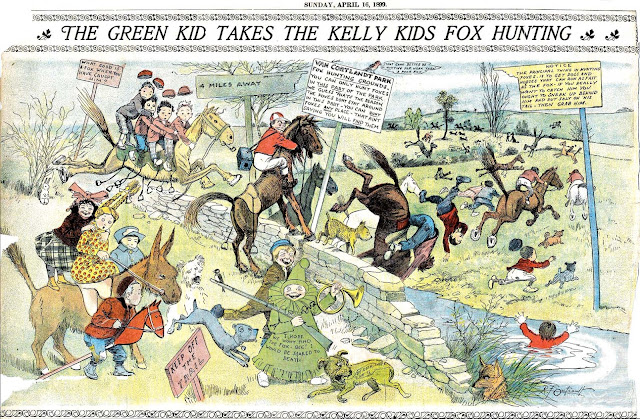 Kelly's Kid is now officially the Green Kid; we are missing the April 9 installment, so that may have been the first in which the kid got that name. The Green Kid doesn't seem to be consciously self-referential, so is Outcault making fun of his old character or is he making an ill-advised attempt to create a knock-off of his own creation?

Comments:
Hello Allan-
In those really early years, the Yellow Kid was the first superstar, and though he was tossed to and fro betwixt Hearst and Pulitzer, I think the Pulitzer guys just couldn't let it go. Recall that while Outcault was over at Hearst in 1897, they did the Yellow Kid one better; Two Yellow Kids, in the form of twin terrors George and Alek. Or was it Mike and Alek? Forget right now. They would go through various adventures,like heading out for the Klondike gold rush, all drawn by our friend George B. Luks.You could tell it was not a labor of love, they were so badly mis-shapen they had to have been created by committee.
At this point, I'd guess the YK was cooling down, or now tangled in publishing rights with Hearst or something. Maybe Outcault thought he could make lightning strike twice with his own "Green New Deal." ouch.

Is that someone else's signature just below the kid who's being tossed from the horse?

Hi Jon -- Looking at the higher resolution version, it seems like Outcault might have re-inked a few of those rocks and grass blades with a heavier line. Maybe the idea was to indicate the shadow of the kid on his way to the ground?