Wish You Were Here, from August Hutaf 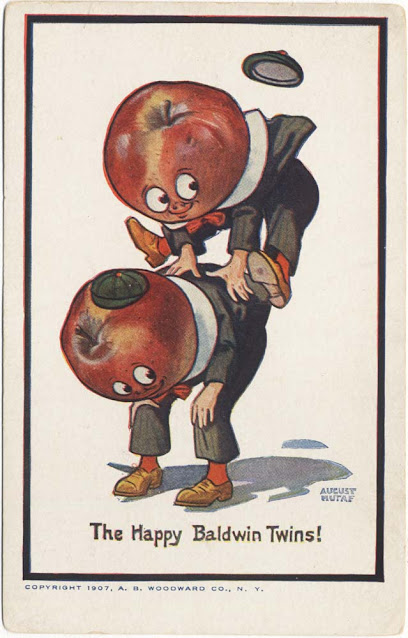 This is another in August Hutaf's 1907 collection of apple cards produced for the A.B. Woodward Company.

The Baldwin apple is practically forgotten today, but was once one of the most popular apples in North America. Baldwin apples tended to be on the smallish side, quite hard but delicious. They were prized also for shipping well, being very resistant to blemishes, and keeping for long periods. Not just a hand fruit, they were also standouts for baking and making cider.

According to Wikipedia, the Baldwin apple is lost mainly because of a bad New England winter in 1934 which wiped out most of the trees. Red Delicious and other apples took the Baldwins place in the market, and the New England Baldwin orchards were never replanted. Few Baldwin trees are left, but it could stage a comeback as an heirloom variety.

Comments:
When Raymond Baldwin (successfully) ran for Governor of Connecticut in 1938, he issued campaign pins that featured his name on the background of an apple. It's highly likely that folks in Connecticut in that era got the joke.

The Great Hurricane of 1938 probably didn't do the apple orchards any favours, either.