Toppers: How To Keep From Getting Old 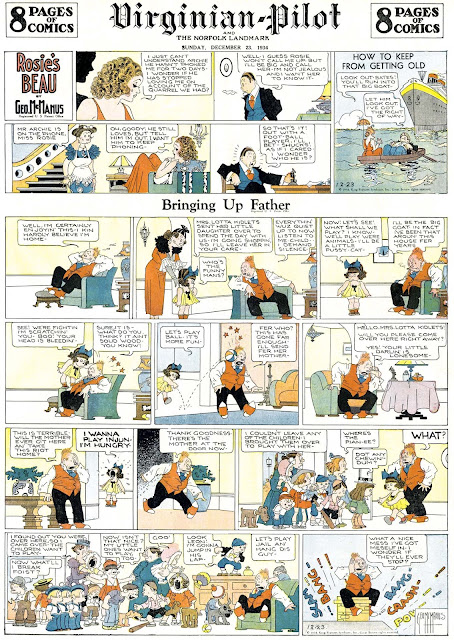 George McManus played along with King Features' policy of multiple toppers by adding a panel cartoon to his Bringing Up Father Sunday page from 1933 to 1937. Rosie's Beau was amputated slightly, which was no great loss, leaving enough room for the additional feature. A total of four different panel titles were used, of which How To Keep From Getting Old ran from April 1 1934 to May 19 1935. The panel offers a simple but effective gag, showing how McManus's dolt of the week puts his or her life in danger.

Comments:
Hello Allan-
The Hearst strips all sprouted these panel cartoons in the Sundays at about the same time, some were ambitious, like the Katzenjammer jigsaw puzzles by Harold Knerr, or the cut out dolls by Murphy in Toots & Casper, or even, surprisingly enough, by Alex Raymond in Flash Gordon.
Most of them were just one-off single panel gags, but the standout was Chic Young's over Blondie. The first one was all gags under the title "Sideshow", but in early 1935, it became the re-occuring characters series "Colonel Potterby & the Duchess", which, after only a few weeks became the top strip, and eventually a seperate strip, lasting until 1963.