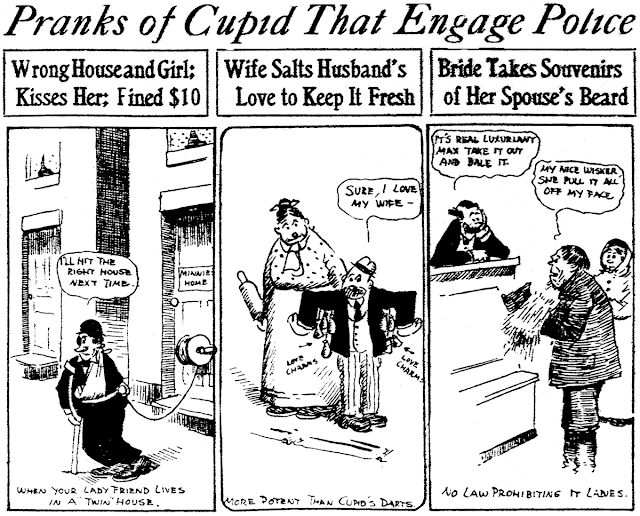 March 1 1910 -- Herriman's cartoons play host to a round-up of Valentine's Day bloopers, cases of Cupid needing to don spectacles before letting go with those arrows. All these wacky stories supposedly occurred in the L.A. area in the near past.

Cartoon 1 is pretty self-explanatory; the young swain sauntered into the wrong house for his date with fair damsel. He was hauled into court for disturbing the peace. His sweetie shows her unflinching love for the myopic Romeo by paying his fine for him.

In the second cartoon, a husband was so annoyed by his wife's 'love potions' -- pouches of table salt tied into his jacket -- that they finally had the opposite effect -- her souvenirs d'amour resulted in him giving her a highly ungentlemanly violent payback and a subsequent appearance before a judge.

In the third cartoon, a Russian immigrant, owner of a luxuriant beard, has just wed his sweet babushka, who soon asked if she could have $2 to purchase a new dress. The man refused and the bride expressed her displeasure by ripping most of his beard off his face. The groom brings his new wife to court seeking redress only to find that giving someone an involuntary shave is nowhere on the books as being against the law.