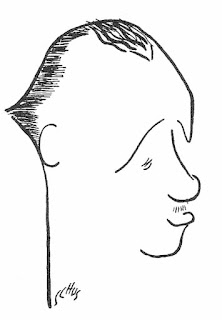 Self-portrait from
Best Cartoons of the Year 1944
Adolph Schus was born on June 15, 1908 in New York, New York according to Who’s Who in American Art, Volume I, 1936–37, Who’s Who in American Art, Volume IV, 1947 and his World War II draft card. However Schus was not found in the New York, New York Extracted Birth Index at Ancestry.com. New York City births were compiled into a book and “Adolph Schus” was not listed and no similar name was found with the June 15, 1908 birth date. Ancestry.com linked Schus to Adolph Schusterman who was born on November 22, 1909.
In the 1910 U.S. Federal Census, the Schusterman family of four lived in Manhattan at 239 East 40th Street. Schus’s father, Samuel, was a drugs salesman.
The 1915 New York state census said Schus’s mother, Sadie, was the head of the household which included him, his older siblings, maternal grandmother and uncle. They all resided in Manhattan at 540 West 165th Street.
Schus was counted twice in the 1920 census. In his mother’s household he was at 3605 Broadway. In his father’s household his address was 502 West 179th Street.
The 1925 New York state census recorded Schus at two locations. He was listed with his mother in Manhattan at 511 West 112th Street. With his father, Schus lived in Brooklyn at 2002 Avenue J.
Schus attended Manual Training High School in Brooklyn. The Brooklyn Standard Union (New York), April 29, 1925, named Schus (Adolph Schusterman) in the staff of The Prospect, the school’s magazine. The Brooklyn Daily Eagle and New York Sun, December 3, 1925, reported the winners of the Brooklyn borough-wide Tuberculosis Christmas Seal Card Contest. Schus (Adolph Shusterman [sic]) won second prize at his school.
Who’s Who said Schus’s art training was at the New York School of Fine and Applied Arts.
At some point Schus and his parents moved to England.
At the Mike Lynch Cartoons website, a reader contributed Schus’ profile which appeared in Best Cartoons of the Year 1943.

Born on New York’s upper east side ... lived in Wembly, a suburb of London, where he spent a good deal of his childhood. The zeppelin raids on London during the first world war, sent the family back to America. Except for a year on the continent, during which time he art-edited a publication published in Paris for Americans abroad. He has been residing in New York. Married a Rochestarian in 1938 and their son was born in 1943. Just before the blessed event they bought a home in Harmon-on-the-Hudson, where Schus will continue to do cartoons for the country’s leading magazines.

The Editor & Publisher, March 19, 1949, published an article about cartoonist Lawrence Lariar and his adventures with friends Jack Arthur and Schus.

… Lariar’s training began in the New York School of Fine and Applied Art. For the first six months he was on commercial illustration, then switched to cartooning. After graduation he started out with two buddies, Jack Arthur, now a school teacher in the New York system, and Adolph Schus, now a designer in fabric house.
The trio set up a cartoon agency in a flat in the 80’s in New York, sold vignettes to College Life, for which the editor wrote two-line captions. They also got in America's Humor magazine, primarily because it couldn’t pay as much as Life or Judge, says Lariar. Arthur, the oldest of the three (he was 21) would contact various outlets and say he represented a dozen different artists, which Lariar, Arthur and Schus tried to prove. One of their “artists” was named Baron de Shebago, who drew a full page of zanies.
In 1927, Lariar went to Paris on a scholarship to the school of dynamic symmetry. He was accompanied by Arthur. Later, the third musketeer, Schus, joined them. They went into the same routine in Paris, and did a big business with British magazines and Fleetway House, then one of the big magazine publishing houses of the world. Much of their work was for The Looker-On, which folded but paid off—fortunately for the sake of their fares back home. They did work, too, for Boulevardier, a Paris publication operated by Erskine Gwynn, an American.
Come Home for Depression
The trio caromed back to New York in October, 1929, a few days after the boom had burst. [Passenger lists at Ancestry.com said Schus returned with his parents on August 20, 1929. His birth date was recorded as June 4, 1908. Lariar returned September 4, 1929. Arthur has not been found.]
“To make a living, we did everything,” says Lariar. “We had a service for printers, drew cartoons for calendars, played messenger and did some of the first work for the slicks.”
The boys hit upon a deal that brought home the bacon when they did a series of cartoon postcards, designed to save Boy Scouts time in writing home to mother. They sold over a million of them in a direct-mail campaign.
Flushed with success, they then embarked on a venture that sank them. In Paris, Lariar had picked up a book reproducing the etchings of a Rembrandt exposition. The plates were excellent, and they had sold many of them to friends back home without any other effort than razoring them out of the book. Reproduction by a photographic process was expensive, and they moved in trade as slowly as coal buckets from a hardware merchant’s shelves in the summer time.
“I still see them in shops around town,” remarks Lariar sadly. “They’re very good, too.”
So the combine broke up …

The 1930 census found Schus at two locations. The newspaper artist was with his mother and two siblings at 610 West 113 Street in Manhattan. He was with his parents and sister in Brooklyn at 2016 Avenue L.
The Grand Comics Database has some of Schus’s credits in Life magazines of 1932, and three issues of the New Fun comic book of 1935. American Newspaper Comics (2012) said Schus produced the Sunday strip The Topps and its topper, Stupe McLupe, for the George Matthew Adams Service. The strip ran from July 5, 1935 to April 4, 1936. Schus and other artists contributed to the daily panel, This and That, for the George Matthew Adams Service. Schus did a Laff-a-Day cartoon in 1936. The New Yorker, March 19, 1938, published a drawing by Schus.
Schus married Sonya Pupik, a Russian emigrant and Rochester, New York resident. According to her 1939 naturalization paper, they married on October 31, 1938, in Elkton, Maryland. The document had Schus’s birth date as June 14, 1908. Apparently their honeymoon was an eleven-day cruise, starting November 18, from New York City and back. On the passenger list their address was 215 West 88th Street in Manhattan.
The 1940 census recorded Schus three times. On April 13, “Adolph Schus” and his wife resided in Rego Park, Queens, New York at 62-28 82 Street. Their house was valued at six-thousand dollars. Schus was a self-employed artist who had two years of college. On the same day, Schus was listed as “Adolph Schusterman”, a newspaper artist, at a hotel in Far Rockaway, New York. On April 18, “Adolph Schusterman” was listed with his mother at 9 Lafayette in Hempstead, New York.
Schus contributed two cartoons to College Humor, January 1940.
Schus signed his World War II draft card on October 16, 1940. His description was five feet ten inches, with brown eyes and gray hair. Some time later, his Rego Park address was crossed out and replaced with 508 West 166th Street, Manhattan. Using his birth name, Schus enlisted in the Army on May 16, 1942. His birth year was 1909. 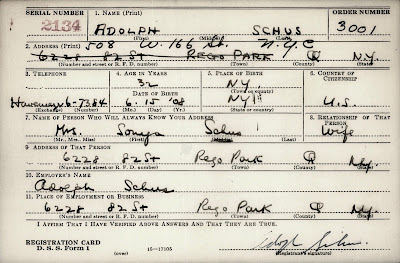 The 1942 and 1943 Manhattan directories listed Adolph Schus and Adolph Schusterman at 508 West 166th Street. Perhaps one name was intended for clients and the other for family and friends. His mother and siblings were also listed under Schusterman.

Schus’s purchase of a house was reported in the New York Sun, August 2, 1943.

The Home Owners Corporation sold a plot of approximately two acres improved with a nine-room residence and garage on Penfield avenue, in the Harmon section, Croton-on-Hudson, to Adolph Schus, an illustrator, through Arnold Krimont of Croton. The residence overlooks the Hudson River.

Manhattan directories from 1944 onward listed Schus and his address as Penfield Avenue Harmon, New York.
In 1945 Schus was the cartoon editor of Pageant magazine.
For the New York Herald Tribune, Schus did Mr. Fussabout which ran from March 7, 1948 to February 13, 1949.
Schus passed away on February 25, 1957 according to the New York, New York Death Index, at Ancestry.com, which, due to space limitation, listed his name as “Adol Schusterman”. The Herald Statesman (Yonkers, New York), February 26, 1957, reported Westchester County deaths and said “Adolph Schus, forty-eight, cartoonist, former art editor and designer, of Penfield Avenue, Harmon, at New York City.”
The Citizen Register (Ossining, New York), June 30, 1961, reported the sale of Schus’s house.

One of First Homes in Harmon Sold to Couple from Peekskill
Sale of an eight-room house at the end of Penfield Avenue in Croton designed in  1910 by Stanford White, has been sold by Mrs. Sonya Schus to Dr. and Mrs. Philip H. Smith Jr., formerly of Peekskill, announced Harold H. Hunt of Croton, broker in the transaction.
The residence, southern colonial in style, is located on a wooded plot that overlooks the Duck Pond and the Hudson River. There is a bridge entrance to the hall and there are four fireplaces in the house, Mr. Hunt points out.
Mr. and Mrs. Alfred S. Dashiell, now of Franklin Avenue, leased the house from Mrs. Mary Reid, widow of the original owner, before a period prior to its sale to Mrs. Schus and her late husband, Adolph Schus, a well-known cartoonist for many years before his death, the border said.
Dr Smith, employed by IBM, now is occupying the house with his wife. Mrs. Schus, dental hygienist at CET school, has moved to Yonkers. Her daughter, Stephanie, was one of the graduates to speak at CHHS commencement exercises Saturday.
The house sold by Mrs. Schus to Dr. Smith was one of the first to be built in the Harmon development, according to Mr. Hunt. The architect, the late Mr. White, was a partner in the firm of McKim, Mead and White, designers of Columbia University, Pennsylvania Station and other Manhattan buildings.

Further Viewing
Billy Ireland Cartoon Library and Museum
Heritage Auctions
Many of Schus’s cartoons for Collier’s and Esquire are here.