Ralph George Reichhold was born on November 3, 1894, in Pittsburgh, Pennsylvania, according to his World War I and II draft cards. Who’s Who in America, 1952–1953 said his parents were William Reichhold and Mary Elizabeth Giltenboth.
In the 1900 U.S. Federal Census, Reichhold was the second of three brothers whose father was a day laborer. The family resided in Pittsburgh at 6726 Hamilton Avenue.
The 1910 census recorded the family of five as Pittsburgh residents at 543 Lowell Street.
The 1913 Pittsburgh city directory had two listings for Reichhold: first as an artist, and second as a student with his surname misspelled “Reichold”.
It’s not known where Reichhold had his early education. Who’s Who said Reichhold studied at the Carnegie Institute of Technology from 1914 to 1916.
Editor & Publisher, June 25, 1949, explained how Reichhold got his start with the Pittsburgh Press.

When he was still in knee pants, Ralph like to draw. He used to hang around a drug store, the proprietor of which was an enthusiast of Indian lore. Ralph drew some Indian pictures and the druggist exhibited them in the store. By and by, a man of some influence saw them and suggested that Ralph, all of 18 years old, go see T. R. Williams, then managing editor of the Press.
Ralph did, but it didn’t do much good. The twig was bent, though, and for six months, Mr. Williams had a frequent visitor, a lad with a handful of sketches. Since he couldn’t very well blockade the Press entrance, Mr. Williams, in desperation, hired Ralph at $8 a week.
Ralph plugged away and in eight years was doing a local panel—Rambling With Reichhold—centered around one incident of everyday life. It was a Press feature for nearly 10 years.

On June 5, 1917, Reichhold signed his World War I draft card. He lived with his parents at the same address. Reichhold was an artist with the Pittsburgh Press. His description was medium height and build, with black hair and brown eyes. The Department of Veterans Affairs BIRLS Death File, at Ancestry.com, said Recihhold served in the Navy from September 6, 1918 to February 8, 1919. His Pennsylvania Veteran’s Compensation Application said Reichhold was in the naval reserve and was stationed at the Wissahickon Barracks. He was not involved in any engagements and honorably discharged on September 30, 1921.
Who’s Who said Reichhold married Minnie Margaret Elizabeth Scheller on September 14, 1917. The Pittsburgh Press, July 31, 1917, said

Miss Minnie Margaret Scheller, daughter of Mrs. Laura M. Scheller of the Eastend, has chosen Friday evening, Sept. i4, as the date for her marriage to Ralph George Reichhold, son of Mrs. Mary E. Reichhold, also of the Eastend. The ceremony will be solemnized in Christ Evangelical Lutheran church, Margaretta and Beatty sts., with the rector, Rev. John I. Shaud, officiating, at 8 o’clock. Miss Margaret P. Allan will play the wedding music and the only attendants will be four ushers, Edwin J. Scheller, brother of the bride: Elmer L. Reichhold and Harold W. Reichhold, brothers of the groom, and J. Arthur Allan. A wedding supper for the bridal party and the immediate families will follow the church ceremony. Mr. Reichhold is a member of The Press staff of artists.

According to the 1920 census, Reichhold and his wife lived in Pittsburgh at 5435 Columbo Street. The newspaper cartoonist owned the house. Ten years later their new home was in Mount Lebanon, Pennsylvania at 121 Vernon Drive. Reichhold’s oldest son was 9 years old and the youngest 10 months.
Reichhold’s Radiotoon activity feature ran on Sundays in the Pittsburgh Press during 1927.
During the 1930s, Reichhold contributed cartoons to Editor & Publisher; samples are here and here.
The 1940 census said Reichhold’s address was unchanged. In 1939 he worked 52 weeks and earned five-thousand dollars.
In 1942 Reichhold signed his World War II draft card and did not serve. 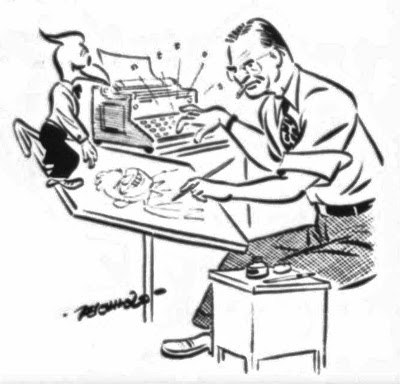 Donnie Dingbat Is Weather Predictor
A year-old half-column bird is the current toast of Pittsburgh news readers.
He is Donnie Dingbat, the Pittsburgh Press weather predictor and commentator extraordinary.
When the war forced the curtailment of weather predictions, Phelps Sample, Press rewrite man, injected topical conversation into his page one daily forecasts. The stories caught on so well that editor E. T. Leech asked editorial cartoonist Ralph Reichhold to create a character to be used as a half column illustration.
Wishing five minutes Donnie Dingbat was born and made his first public appearance in the next edition.

American Newspaper Comics (2012) said Reichhold produced the panel, This Is Pittsburgh, for the Chamber of Commerce of Pittsburgh. The panel appeared in Pittsburgh papers during 1948.
Reichhold advertised his services in Printers’ Ink.

Ralph G. Reichhold, 94, retired artist and writer for the Pittsburgh Press, died Jan. 2 in the Courtland Manor Nursing Home, Dover, Del. He had retired in 1955 and moved to Rehoboth Beach, Del., after a 42-year career at the paper. Reichhold created a cartoon character, “Donald [sic] Dingbat,” a small bird which appeared with the daily weather forecasts for 37 years. He also drew a panel comic and editorial cartoons.