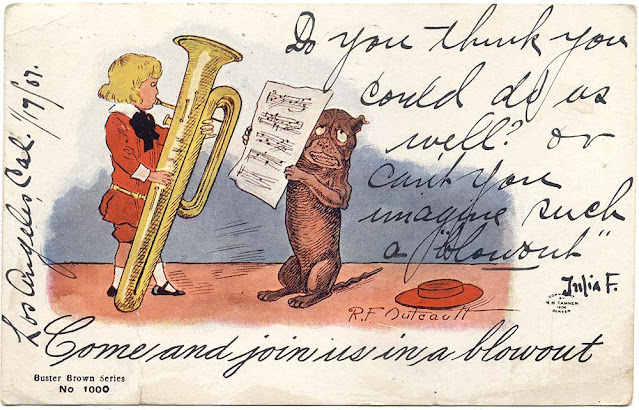 Here's an interesting Buster Brown card. It was published by the H.H. Tammen Company out of Denver Colorado. Tammen was one of the owners of the Denver Post, and he published postcards as a side gig.

This card was published in 1906 (postally used in 1907) when Outcault was in the midst of leaving the New York Herald for greener pastures. Tammen's Denver Post was one of his suitors, and the marriage came so close to consummation that they are listed as the copyright holders on one or two Buster Brown items, including one Sunday page.

If Outcault was willing to have Tammen publish postcards of his stars you'd think he would have given them some proper art to work from: this card looks like a bad tracing of an Outcault original. This card is number #1000, and I have found another online, numbered #1002. The cards from this series appear to be much scarcer than other Outcault cards, probably resulting from Tammen being a jilted suitor.