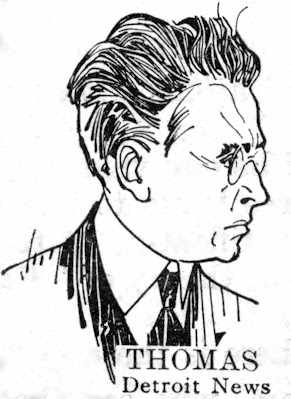 Burt Randolph Thomas was born on December 4, 1881, in Cleveland, Ohio, according to his World War II draft card and Who Was Who in America (1981). His parents were Martin Lee Thomas and Mary Randolph. He graduated high school in 1899 and attended the Cleveland Art School from 1899 to 1902.
The 1900 U.S. Federal Census recorded Thomas, his parents and older brother in Cleveland at 103 Newell Street. Thomas’ father was the proprietor of a planing mill where Thomas was a bookkeeper.
Who Was Who said Thomas was an artist on the Cleveland Press from 1900 to 1902. He did advertising illustration from 1902 to 1904.
Thomas continued his art training at the Detroit Art School from 1903 to 1905. The 1903 Detroit, Michigan city directory listed Thomas at 121 Lysander Street. Directories from 1905 to 1908 said Thomas boarded at 494 Putnam Avenue and was a Detroit News artist.
In the 1910 census, newspaper artist Thomas was a lodger in Detroit at 22 Adelaide Street.
Thomas’ address was 310 Merrick Avenue in the 1911 city directory. On June 3, 1911, Thomas married Margaret Yarger in Detroit. Their address in the 1912 city directory was 657 Lothrop Avenue. 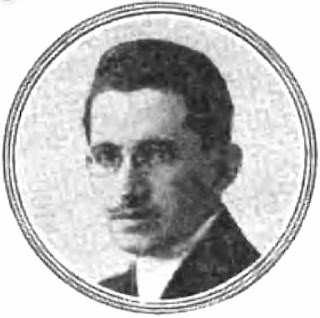 Cartoons Magazine, October 1914, published Thomas’ “Utopia Under the Big Top”.
Thomas’ Our Neighbors ran from February 5 to August 17, 1915 and was syndicated by Herbert Ponting.
Thomas was featured in Editor & Publisher, April 7, 1917. 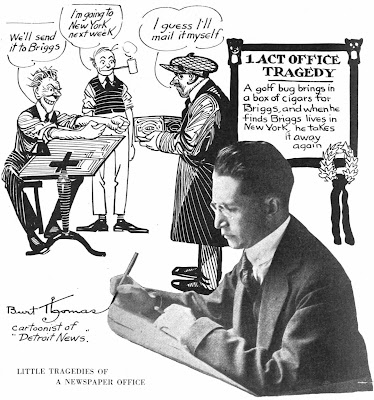 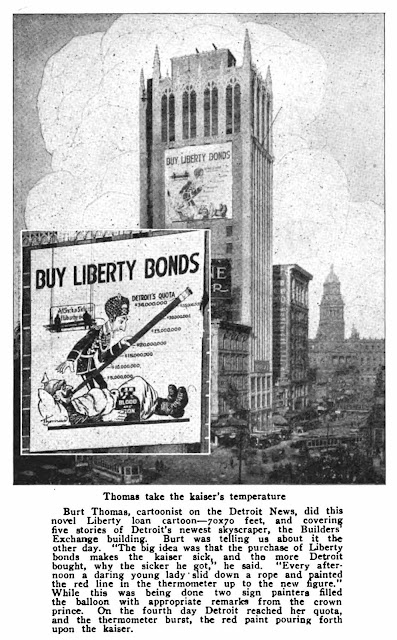 On September 12, 1918, Thomas signed his World War I draft card. The Detroit News cartoonist resided at 629 La Salle Gardens South. His description was tall and slender with blue eyes and brown hair.
Thomas had the same address in the 1920 census.
American Newspaper Comics (2012) said Thomas produced Mr. Straphanger, for the Detroit News, from February 26, 1922 to 1933.
According to the 1930 census, Thomas, his wife and daughter were residents of Grosse Pointe, Michigan, at 886 Washington Street. The same address was in the 1940 census. Thomas’ highest level of education was the fourth year of high school. In 1939 he earned over five-thousand dollars and his house was valued over twelve thousand dollars.
Thomas signed his World War II draft card on April 24, 1942. His address was unchanged. He was employed at the Detroit News. His description was five feet ten inches, with blue eyes and gray hair.
At some point Thomas moved to California. The 1948 Santa Barbara city directory listed him at 22 East Los Olivos. His office was at 735 State Street in room 334. In 1951 his address was 8 Virginia Road.
Thomas’ retirement was noted in Editor & Publisher, September 22, 1951.

Detroit—Burt Thomas, creator of Mr. Straphanger, has retired. His present address is Santa Barbara, Calif., where he has ideas (jokingly) of becoming a beachcomber.
For 48 years, Mr. Thomas drew pictures for the Detroit News. For more than a score of years he was one of the nation’s celebrated editorial cartoonists whose work was syndicated to hundreds of newspapers.

Thomas passed away on July 3, 1964, in Berkeley, California, according to Artists of Early Michigan: A Biographical Dictionary of Artists Native to or Active in Michigan, 1701–1900 (1975).

Comments:
One thing that baffles me is that there doesn't seem to be any collections of Thomas' work. Quite a few of his cartoons were reprinted in The Literary Digest, and the Britannica Book of the Year had some of his later work, but considering his relative prominence in the field (and how lovely his art is), no collections.