D. Foster Humfreville was born on March 1, 1902, in  St. Joseph, Missouri, according to his World War II draft card, Who’s Who on the Pacific Coast (1949), and Who’s Who in the West (1954). His parents were Daniel Louis Humfreville and Helen Boldt Medsker.
The 1910 U.S. Federal Census recorded Humfreville as the oldest of three brothers. Their father was a physician who had remarried to Josephine Hardesty. The household included Josephine’s sister and a servant. They lived on Ashland in St. Joseph.
In the 1920 census, Humfreville, his three brothers and parents were Los Angeles, California residents at 5357 Loma Linda Avenue.
Humfreville was listed in Pasadena, California city directories from 1923 to 1928. His address was 1055 Laguna Road.
Who’s Who on the Pacific Coast said Humfreville was a student at the University of California. He was an undergraduate in the university’s Catalogue of Officers and Students 1923–24. His photograph appeared in the 1924 yearbook, Blue & Gold. 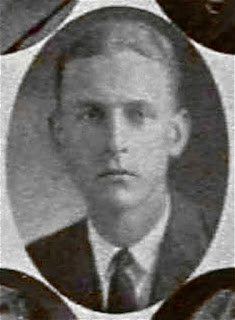 According to Who’s Who on the Pacific Coast, Humfreville attended the Otis Art Institute, in Los Angeles, from 1925 to 1926, and the California Art Institute in 1927.
A passenger list at Ancestry.com said Humfreville sailed from the Panama Canal on February 15, 1928 and arrived in New York on February 22.
Who’s Who on the Pacific Coast said Humfreville, from 1928 to 1940, specialized in decorative murals; produced sculptures at the New York World’s Fair, the Museum of Science and Industry, and Rockefeller Center. He began his freelance cartooning career in 1941 which included the creation of Alfred for Collier’s Magazine.
For the Works Progress Administration, Humfreville created the 1936 poster “Shame May Be Fatal”.
The 1940 census listed commercial artist Humfreville in Manhattan on West 99th Street. In 1939 he earned nine-hundred dollars.
Freelance cartoonist Humfreville signed his World War II draft card on February 16, 1942. His address was 318 West 102nd Street in Manhattan. In 1942 that address was crossed out and replaced with 1055 Laguna Road, Pasadena, California. Later, the street address was updated to 506 Lake View Road. Humfreville’s description was six feet two inches, 145 pounds, with blonde hair and blue eyes.
In 1944, the R. M. McBride & Company, published a collection of Hunfreville’s Alfred cartoons called Alfred, Ahoy! A profile appeared on the back of the dust jacket.

Born in St. Joseph, Mo., Foster Humfreville blossomed in Hollywood and Pasadena, where he was not, he admits, a genius at school, having attended fifteen and having been graduated from none, chiefly because his principal interest was in collecting snakes and lizards.
His first job was in a Los Angeles bank, which he left at the end of two years to attend art school. Later he migrated to New York to become an artist via sculpture, painting, drawing, and designing museum displays. However, having doodled with cartoons and caricatures since childhood, our subject naturally would up as a comic man. In 1941 he sold his first gag to Collier’s and has drawn for that publication exclusively ever since.
In the summer of 1942 the Foster father of Alfred returned to California but continued to entertain Collier's readers with Alfred's antics.
Humfreville says he knows very little about the Navy and that used to get his ideas and backgrounds by talking to sailors about ships and Navy life. As the war progressed, this proved to be more and more embarrassing, and he has had to curb his queries in order to prevent landing in the hands of certain Federal officials.
Like Alfred, Mr. Humfreville has never been married. “Who would have us?’ He asks. Wistfully, it seems.

The Catalog of Copyright Entries, Part 1, Group 1, Books, 1944, New Series, Volume 44, Number 4, said Humfreville held the copyright to the book.
In late 1948 or early 1949 Alfred stopped appearing in Collier’s. American Newspaper Comics (2012) said Alfred was continued as a strip by the McClure Syndicate, who hired Carl Ryman to produce it. The strip began on October 17, 1949. In 1944, Ryman moved from Milwaukee, Wisconsin to Los Angeles, California. Ryman met Humfreville and assisted him on Alfred. Editor & Publisher, October 1, 1949, explained how Humfreville and Ryman produced Alfred.

The gag-a-day strip ... is the outgrowth of a Collier’s panel drawn by Foster Humphreyville [sic] with Carl Ryman supplying the gags. Mr. Humphreyville relinquished the character to Gag Man Ryman and trained another artist who will draw the strip under Mr. Ryman’s direction.

After leaving Alfred, Humfreville found work in advertising and the aerospace industry. In 1949 and 1950, Humfreville illustrated a number of Haber Hinges advertisements. Who’s Who in the West said Humfreville was an illustrator for the Lockheed Aircraft Corporation, in California, since 1953. His home address was 301 South Kenmore Avenue, Los Angeles.
The 1963 Glendale, California city directory listed “Humfreyville” and his wife, Eleanor, at 1647 Fernbrook Place. He was employed at Rocketdyne. The Rocketdyne Engineering Personnel Assignment List, January 1965, said Humfreville was in Illustrations, Department 086, Group 309, Engineering Production Support. (See PDF page 70)
Humfreville passed away on November 7, 1971, in Riverside, California. He was laid to rest at Riverside Cemetery.
Further Reading and Viewing
Naval Historical Foundation: Alfred, Ahoy! Foster Humfreville and His Cryptic Cartoons of World War II
The Fabulous Fifties: Silent Cameo