February 9 1910 -- The morning after the big upset, Fireman Jim Flynn knocking out Sam Langford, the sports page is abuzz with the news. Herriman, though, for some reason ignores the big sporting news and does a one-shot strip on the sports page.

Obscurity of the Day: Katy-did 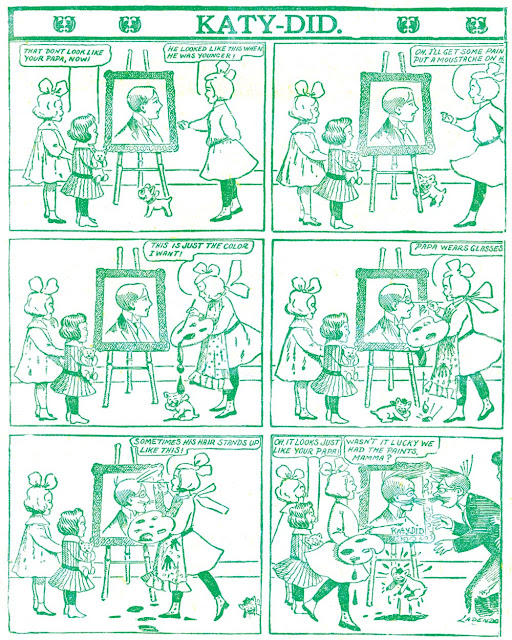 Frank Ladendorf was a pioneer of the funnies pages, but is little remembered because his material just couldn't compare to others like Outcault, Opper and Dirks. He was with the New York World for years, and his last comics section contribution was no soaring coda, but more of a last gasp. Katy-did is your typical naughty kid strip, the only thing unusual about it is that it stars a girl. It was one of the quarter-page World strips, and only made it into the syndicated version three times, from March 15 to 29 1908. According to Ken Barker's World index, it ran in the flagship paper a few extra times, from March 1 to 29 (apparently the syndicated version used Jay Jones - His Camera rather than the Ladendorf strips).

Our sample above is the final strip in the series, and bids goodbye to Ladendorf's comic section career by cutting off the right edges of his panels so that his final signature is partially missing. Not quite the gold watch treatment...

Comments:
Hello Allan-
Can it be that the reason it's trimmed this way be because it was drawn to configure to a Pulitzer daily size?

Obscurity of the Day: Ug

Tom Wilson Sr. made his indelible mark on the comic strip world with Ziggy in the 1970s. His son, Tom, Jr., after an unrewarding stint as an artist and product designer, determined to follow in his dad's footsteps in the 1980s. He came up with Ug, a strip starring a gentle and somewhat befuddled furry giant of indeterminate species, and his pal, Bogey, a worldy wise bird who serves as the George to his Lennie.

Ug was bought by Universal Press Syndicate (which also syndicated Ziggy), and after extensive tweaking the strip was loosed on the world to a claimed 75 newspapers as a Sunday and daily strip. That's not a bad start at all, if true, but evidently it didn't take off to the extent hoped for by the cartoonist or his syndicate. The daily strip ran from April 2 1984 to December 14 1985, and the Sunday ran April 8 1984 to December 8 1985*.

My guess is that Wilson's famous name, while it may have helped him get the syndicate contract, worked against him when newspaper editors were looking at the strip. There's a certain Ziggy-ish quality to the feature that seems much amplified when you know the identity of the creator. I can see editors rejecting the feature, saying that we don't need a another Ziggy, thanks anyway.

Tom Jr. wasn't to remain on the sidelines for long. Around 1987 he began assisting his dad on Ziggy, eventually taking it over in the 1990s. So if Ug was not a lasting success, it did serve its creator well as training for taking over his dad's feature.

*Source: All dates from John Lund based on Boston Herald.

Comments:
I'm struck by the amount of close-ups in these sample strips. Think the animated "Star Trek" cartoons from the 1970s.

Obscurity of the Day: Jawnny Grin 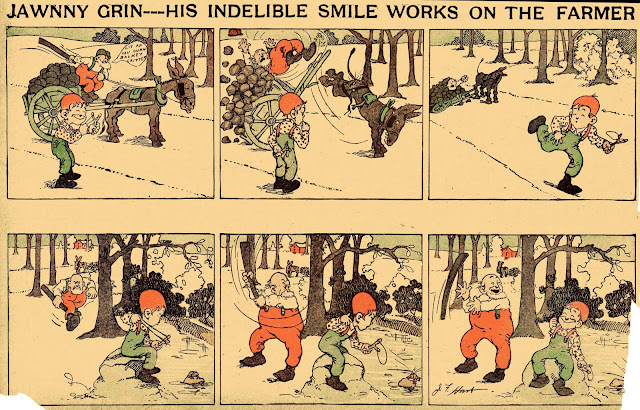 Cartoonist John F. Hart was a Philadelphia newspaper institution in the 1900s-20s, but his work was mostly in puzzles and non-series cartooning. When he occasionally dipped a toe in that end of the pool his art made you want more, but his lack of ability as a comic strip writer made you wish he practiced a little more before inflicting his work on the unsuspecting public.

Here is Jawnny Grin, which offered an admittedly out of the ordinary gag for the comics page; the basic idea is the same ole same ole, a bratty kid. But this kid has a beaming smile that can get him out of any sort of hot water. Unusual, yes, but the execution is so inept that the gag needs to be explained in the title bar.

Philadelphia North American readers only had to put up with this stinker once, but it ran in the North American's syndicated comic section several times between June 3 and July 29 1906*.

Thanks tyo Cole Johnson for the scan.

Comments:
Hello Allan-
This is surely one for the "Stupidest comics" file. I didn't realize the NA had overflow material for clients only, like the Inquirer had. Does this mean the Boston Post regularly ran such material? Is this material made to take the place of something that did appear in the NA?

I don't have a lot of material at hand to cross-reference, but my guess is that the North American may have been charging extra for Peck's Bad Boy, which was a licensed property. Maybe papers that weren't willing to go the extra bucks for that got stinkers like Jawnny Grin to show them the error of their ways.

Hello again-
It makes sense that the Peck series could go extra, but that series didn't begin until 10 June. It and all the NA sections from start to finish have a full page cover subject, which would be syndicated as well. Is the Boston Post running some other syndicate's full page material for their cover in place of Peck? and is the "Jawnny" you see in the Post a full, and if not, does another NA subject share the page?

So what I have in the Post on 6/17, my only date in the range needed, are Waldo and his Papa, Willie Westinghouse, Little Bill and Ben of Babylon and Jawnny Grin. In the NA on that date (unfortunately I did not record the sizes) are Peck's Bad Boy (presumably full), Little Growling Bird (presumably full), Willie Westinghouse and Little Bill and Ben. That would seem to leave a full page in the NA unaccounted for. I think that J.F. Hart puzzle feature would account for another half-page, and I don't know what would have been on the last half. That means both Waldo and Jawnny didn't make the cut in the home paper that week.

So to sum up, my thinking now is that the J.F. Hart puzzle feature and sometimes something else (an ad?) were the items for which the NA sent out additional material they didn't run.

Hello-
I think you've hit on an undetected componant of the NA, that they were fielding a complete comic section of four pages, with the two standard "inside" offerings of four half page titles, but the parent paper filled one of these pages with non-comic material.
You mention your Post has Waldo And His Papa as well as the Jawnny strip. Waldo wasn't in the NA that day either, so that must be the syndicate-only page. The NA's three page arrangement existed for years, so whole series could've never been seen there.
I made my breakdown of the North American over forty years ago. Looks like additional work should have been done with a client paper.

Wish You Were Here, from Archie Gunn 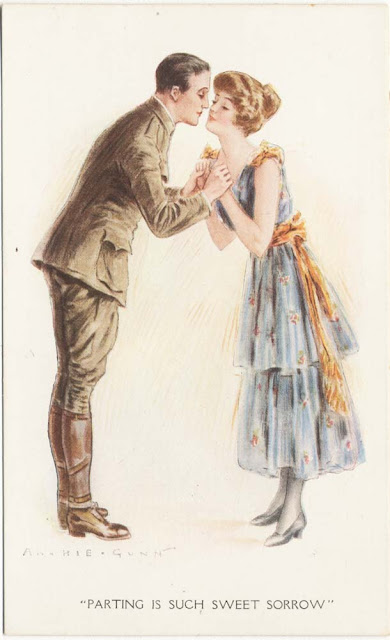 Here's a postcard issued by the Illustrated Post Card and Novelty Company during the U.S. involvement of World War I, so presumably in 1917 or '18 though the card itself is undated. It bears a code number of  136B.

Archie Gunn was a somewhat renowned 'pretty girl' artist who produced many postcards and posters. He was a regular feature in the newspaper Sunday supplements of the 1890s and into the 20th century.

Our hard and fast rule here at Stripper's Guide is that only newspaper cartoonists rate being featured on Wish You Were Here, and Gunn admittedly has no known strip series in his credits. I believe he did, however, produce the first installment of Rice and Tapioca the Famous Pudding Brothers, albeit anonymously. So we won't make a habit of running Gunn's cards, but we'll offer him this one appearance as his due.