February 19 1910 -- Herriman invents a pair of young fighters -- the Covina Dumpling and the Long Beach Shrimp -- to make a point that the boxing world rankings and titles are sometimes determined by a lucky punch, a slippery mat, a distracted referee, or in this case an opponent who keeps coming back until luck finally goes his way.

Margaret Ahern was born Margaret O'Connell on February 16, 1921, in Manhattan, New York City, according to the New York, New York Birth Index at Ancestry.com. Ahern’s Social Security application said her middle name was Teresa and parents were John McCrohan and Margaret M. O’Connell. McCrohan was an Irish emigrant who arrived in New York City on August 11, 1921, almost six months after Ahern’s birth. He and O’Connell obtained a marriage license on April 29, 1922 in Manhattan. On November 30, 1927, McCrohan became a naturalized citizen. McCrohan’s Petition for Naturalization said he resided in Detroit, Michigan at 4249 West Maypole Avenue, and his daughter lived in Chicago.
The 1930 U.S. Federal Census said Ahern and her parents lived in Chicago at 4701 Gladys Avenue. Her father was a factory worker.
According to the 1940 census, Ahern lived with an aunt in Chicago at 4159 Adams Street. Ahern completed four years of high school and was a new worker.
The Irish American Who’s Who (1984) said Ahern’s art training was at the American Academy of Art in Chicago.
Ahern visited Mexico in June 1946. A Pan American Airways passenger list said she returned to the U.S. through Brownsville, Texas.
Ahern’s marriage was reported in The Garfieldian (Chicago, Illinois), July 17, 1947.

Creator of ‘Little Reggie’ Is Married
Miss Margaret McCrohan, 4159 Adams, known to readers of the Garfieldian and Austin News as “Margarita,” artist and creator of the comic strip “Little Reggie,” was married in St. Mel’s church last Saturday to Edward M. Ahern of Wheaton, Illinois. Miss McCrohan was graduated from Providence High school and attended the American Academy of Art in Chicago. During the war she was editorial cartoonist of the “New World,” Catholic Diocesan weekly newspaper, but is now a free lance artist. She has used the pen name “Margarita” since returning from a trip to Mexico. “Little Reggie” is syndicated throughout the United States.
Miss McCrohan wore a wedding dress made with a satin bodice and marquisette skirt. Her fingertip veil fell from a headpiece of orange blossoms. The bridal bouquet was made of gardenias, white roses and gladioli. Attending the bride were Miss Mary Lauer, maid of honor, and Miss Katherine O’Grady, bridesmaid. They wore gowns of aqua marquisette and carried bouquets of red carnations. Ahern was attended by James A. Newsham, best man, and George Peper and Thomas A. Wood, ushers. Following the ceremony a breakfast was held at the Graemere hotel.
The groom, son of Mrs. John J. Ahern of Wheaton, is secretary of the Chicago Post Office Clerks association, and a clerk at the Garfield Park post office. He was graduated from Crane Technical High school and attended Crane Junior college and the Chicago Academy of Fine Arts. An ex-sergeant of chemical warfare intelligence with the air corps he saw service in England, France and Germany.

Her cartooning skills paralleled the pioneering days of television in Chicago and were featured in an early 1950s program called “Cartuno.” The program, essentially a game show, had Mrs. Ahern illustrate some aspect of a song while contestants tried to guess its title.
“On the screen you could see her hand drawing clues to the song,” said her son.

For The Waifs’ Messenger, Ahern produced two series, Beano and Angelo. Her best known series was An Altar Boy Named Speck for the Catholic News Service. The Speck cartoons were compiled in three books. Ahern used a pen name, Peg O’Connell, for the series, Our Parish.
Ahern passed away on August 27, 1999, in Wheaton, Illinois. She was survived by her husband, two sons, two daughters and seven grandchildren.
Further Reading
Bleeding Cool, After 70 Years, About Comics Revives Speck The Altar Boy
Lambiek Comiclopedia

Sy Grudko was born Seymour Grudka (possible misspelling) on October 3, 1927, in Brooklyn, New York, according to the New York, New York Birth Index, at Ancestry.com. Passenger lists said Grudko’s parents, Sam and Ida “Grudki”, and two siblings, Isidor and Hilda, were Polish emigrants who arrived in New York City: his father in August 1920; his mother and siblings in November 1921. The family settled, with help from Sam’s brother-in-law, in Brooklyn. Three months later Sam “Grudko” declared his intention to become a citizen.
The 1925 New York state census recorded the “Grudka” family of five in Brooklyn at 280 Sumpter Street. Two-year-old Rose was latest addition to the family. Her father was a carpenter. Sam Grudko became a naturalized citizen on January 4, 1926. His Brooklyn home was at  854 Stone Avenue. Grudko’s mother was naturalized on November 24, 1942.
In the 1930 census (below), the “Groudkay” family resided in Brooklyn at 769 Hopkinson Avenue. However, Grudko and sister Rose were not listed. It’s not clear if the omission was intentional or they lived elsewhere. 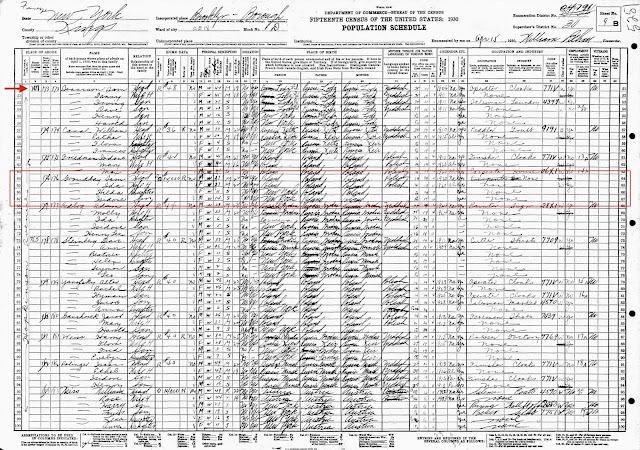 The entire Grudko family was named in the 1940 census. They lived at 1721 East 14 Street in Brooklyn. Grudko was twelve years old and had completed the seventh grade. He attended James Madison High School and, apparently, did not graduate.
On October 3, 1945, Grudko signed his Word War II draft card which said he was unemployed. He enlisted on the first day of November. Grudko’s record said he was a commercial artist who had two years of high school. 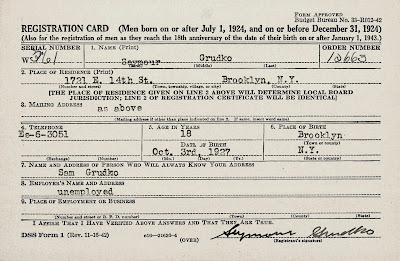 In a telephone interview with Dr. Michael J. Vassallo, Grudko said he was discharged in 1946 and used the G.I Bill to enroll at the Art Students League in Manhattan. He studied illustration and anatomy. In late 1947 he heard about an apprenticeship opening at Timely Comics and took samples to Timely’s office in the Empire State Building. Stan Lee hired him to be on the staff. Grudko’s first work was a two-page Human Torch filler. In the bullpen he sat in front of Syd Shores. The staff was let go in 1949.
The New York, New York Marriage License Index, at Ancestry.com, said Grudko and Selma J. Launberg obtained a marriage license in Brooklyn on January 20, 1950.
Grudko said he did some freelance work, in the 1950s, for Ace Magazines and Atlas Comics.
American Newspaper Comics (2012) said Grudko drew the comic strip So It Seems which was distributed by the Bell Syndicate. The strip originated with Lou Cameron on March 3, 1952. Cameron became very busy and asked Grudko to do it. Lou Cameron’s Unsleeping Dead (2018) said Cameron sold the strip to Grudko for one dollar. The last strip signed by Cameron was September 13, 1952. From September 15 to 20,  the strips were signed by Cameron and Grudko. The series was drawn and signed by Grudko from September 22, 1952 to March 21, 1953 although Cameron’s name remained on the strips.

During the 1950s the comic book industry contracted and many freelancers left the field. In the mid-1950s Grudko moved his wife, daughter and son to Lindenhurst in Long Island, New York. Grudko went to work for his brother in retailing. In 1961 he started his own business in Kings Park. That was followed by his successful women’s clothing shop, the Cheryl Ann Shop, in Farmingdale, through the mid-1990s. Grudko and his wife were mentioned in the Babylon Beacon newspaper November 30, 1967; December 14, 1967; November 4, 1971; and June 8, 1972. The Farmingdale Observer, September 16, 1971, mentioned Grudko and his shop. The Farmingdale Post, February 28, 1974, said Grudko was the vice president of the merchant’s association.
Grudko passed away on February 18, 2011. He was survived by his wife, three children, seven grandchildren, and two sisters. The Social Security Death Index said his last residence was Hainesport, New Jersey.
Special thanks to Diane Schoer, Grudko’s daughter, who provided additional information and corrections.
Further Reading
Grand Comics Database
Lambiek Comiclopedia
Who’s Who of American Comic Books 1928–1999

Obscurity of the Day: Mary and her Little Lamb 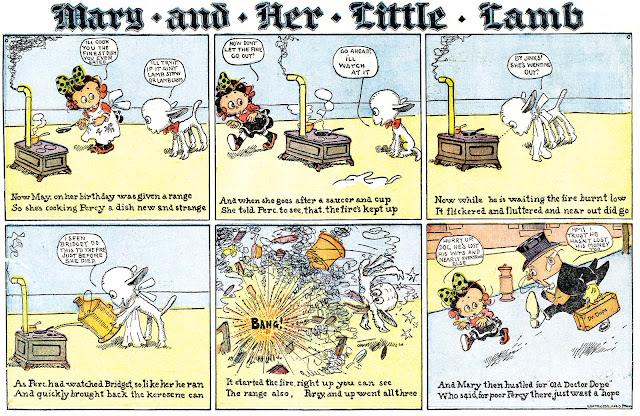 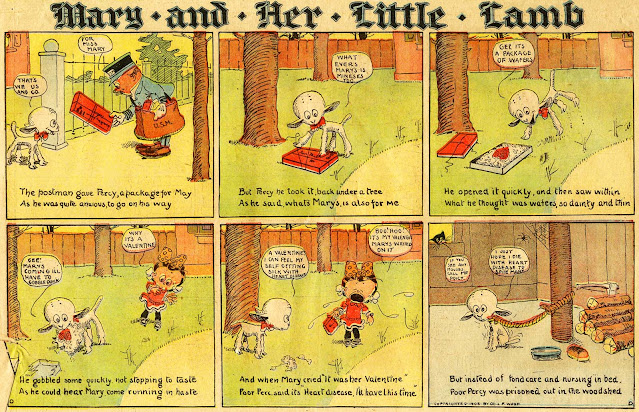 In William F. Marriner's long stint at the McClure Syndicate (about 1905 to his death in 1914), his mainstay strip was Sambo and his Funny Noises; few other series of his lasted very long. An exception to that rule is Mary and her Little Lamb, which ran for about two and a half years. It had the one necessary element of any classic Marriner strip -- a cute kid -- and a bonus -- a madcap lamb.

And the strip IS good as long as you learn one simple rule: Read the strip via the wonderful speech balloons, where Marriner shines with his slangy patois, but do NOT read the nursery rhymes underneath that repeat everything above in stilted verse form. I downright hated this strip until I learned the rule and felt that it was an utter waste of Marriner's towering talent.

Mary and her Little Lamb debuted on August 12 1906* in the Otis F.Wood copyrighted version of the McClure section, and is one of the strips that Marriner never (or at least rarely) signed. Other cartoonists at McClure also metered out their signatures in moderation so I assume there was some sort of rule against a creator signing too many features in the section. That lack of a signature makes it hard to say whether Marriner eventually grew tired of this strip to the point where he he really dogged it, or if the strip was handed off to an untalented assistant. Whichever the case, in 1909 the strip degraded in quality week by week until it was finally put out of its misery on March 28 1909*.

Comments:
I wish I'd seen your reading directions first. The poetry not only scans poorly, it also constantly changes verb tense in mid-sentence. The English teacher in me weeps.

This format reminds me of British comic strips during the long transition away from the text-only format. Typeset blocks under each panel described the action. There were also dialogue balloons within the panels. As in these samples, the text often repeated the spoken dialogue. And just like here, 99% of the time a reader could get the entire story without reading the text. In fact many of these hybrid strips were later reprinted as straight comics, without text. If you hadn't seen the original you'd never know it.

Wish You Were Here, from C.D. Gibson 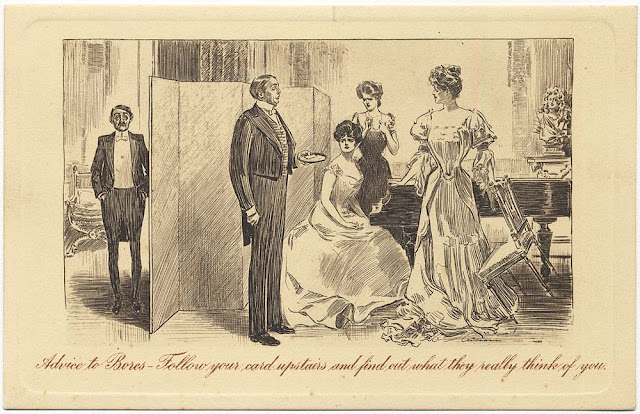 We've had a number of postcards on the blog from the Gibson series issued by the Detroit Publishing Company, but this one is from a British maker, James Henderson & Sons, Ltd. This is card #189 in their Gibson series.