March 6 1910 -- Herriman pens a philosophical sports strip, in which he makes the case that victory in battle is and has always been fleeting. No matter how mighty the warrior, Father Time is always the ultimate victor.

The less heady point of the strip is that Battling Nelson, for several years the holder of the lightweight boxing title, has now been beaten repeatedly by Ad Wolgast and his best years are definitely at an end. Nelson will continue fighting for another seven years before finally retiring, but never again as a serious contender. Wolgast will be lightweight champ for two years before going down the same well-worn path as Nelson, fighting far past his prime.

Raymond Henry “Ray” Doherty was born on December 4, 1906, in Garyville, Louisiana, according to his World War II draft card. In the 1910 U.S. Federal Census, Doherty was the oldest of two sons born to William, a boilermaker, and Noelie. The family resided in St. John the Baptist, Louisiana.
The 1920 census said Doherty’s mother was a widow and head of the household. She, her sons and an aunt lived on Little Hope Street in St. John the Baptist.
In 1927 Doherty married Eva. According to the 1930 census, Doherty, his wife and two daughters lived with his mother whose address was unchanged. Doherty was a grocery salesman.
The San Francisco Chronicle (California), January 26, 1963, said Doherty “moved to San Francisco with his wife and family in 1935 and took a job on the old Call-Bulletin.” Information about Doherty’s art training has not been found. The 1938 San Francisco city directory listed Doherty at 3303 Army Street.
The 1940 census recorded Doherty, his mother, wife, four children and brother, a bank clerk, in San Francisco at 391 Rolph Street. Doherty was a newspaper artist whose highest level of education was the second year of high school. His house was valued at five-thousand dollars. In 1939 Doherty earned $2,705.
On October 16, 1940, Doherty signed his World War II draft card. He was employed by the Call-Bulletin newspaper. His description was five feet eleven inches, 180 pounds, with brown eyes and hair.
Editor & Publisher, January 18, 1941, reported Doherty’s new business. 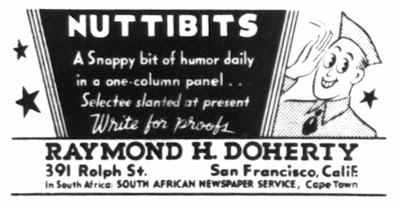 Editor & Publisher 11/25/1941
Wood Cowan’s Sissy was syndicated by Doherty.
The Chronicle said Doherty joined the Chronicle, in 1942, as a staff artist and cartoonist.
The Writer’s Market (1945) had an entry for Doherty.

The Chronicle said Doherty left the paper in 1956.
Doherty passed away on January 25, 1963 in San Francisco. He was laid to rest at Holy Cross Catholic Cemetery.

For the year 1987 we lost one paper, the Dayton Journal Herald, that printed its last edition in 1986. 10 other papers have missing information, so for this survey we are covering 274 papers.

In the Top 30 we have one new strip; Funky Winkerbean knocked out Berry’s World, mainly because the latter lost a whopping eleven papers. The biggest movers in the Top 30 were Far Side which moved up 6 spots from 19 to 13, passing Dennis the Menace to become the 2nd most popular panel feature. Bloom County moved up 5 spots to enter the Top 10 in 8th place. The 100 Paper Club added three new members: Bloom County, Far Side and For Better or For Worse; that makes the total now 15. Also, with Garfield adding 5 more papers this year it has become the 3rd strip to have 200 or more papers.

The popularity of the universal comic section continues to grow. Here is the breakdown:

The five papers that had the Top 13 strips were the Dayton Daily News (OH), Hartford Courant (CT), Press and Sun Bulletin (Binghamton, NY), St. Louis Post Dispatch (MO) and Star Tribune (Minneapolis, MN). All these papers did not run the 14th strip, Frank and Ernest. Tie breaker time for determining the closest to a universal comics page:

The winner of the Universal comic section for 1986 is the Dayton Daily News if we add the remaining 7 strips they used from the Top 30. The paper had 26 out of the Top 30 strips out of a total of 40 daily strips that ran on their comics page.

Here are the rankings of remaining strips that appeared in the Top 300 papers, in order by number of papers in which they appeared:

Jeffrey Lindenblatt's Paper Trends: The 300 for 1987 - Biggest Gainers and Losers

The biggest gainer for 1986-87 was the also the biggest gainer in 1985-86 and that was The Far Side by Gary Larson, which gained 30 papers this year, and with last year’s gain of 35 that makes an impressive total of 65 papers in the past two years. Coming in second is a strip that gained 20 papers, Bloom County, which continues its fast growth in popularity. Tied for second and in its second year, Calvin and Hobbes, which is showing how popular this strip was from its inception in 1985. For Better and For Worse and Cathy continue their healthy annual growth with 13 and 7 more papers this year.

Here are the biggest gainers:

The strip that lost the most papers was Berry’s World with 11, most likely losing most of those spots to The Far Side. Here are the biggest losers from 1986 to 1987:

As expected the adventure strips continue their slow demise. Three rare plus signs on display this time though:

The total slots for adventures strips is down 16 from last year; that is a 6.1% drop.

Soaps did not have much of a drop this year:

The Soaps dropped 7 from last year which is a 3.5% dip but most of that was because the end of the strip Dondi.

The rookie winner starting during 1986 is a clear victory for marketing. The hottest strip for the past eight years was Garfield by Jim Davis from United Feature Syndicate. So how do you get another United Feature rookie strip to be number 1? You offer another strip by Jim Davis. That strip was US Acres which debuted in 32 papers. But is that a real victory? Yes and no. Given the number of papers that picked up the strip, then it seems to be a clear victoty, but if you take into account that 26 of the 32 papers were already running Garfield then no. Why is that? The reason is that when the strip is compared side by side every day to the better strip Garfield people lose interest and so will the editors. So, a better success would have been to offer a Jim Davis strip to papers that did not have Garfield available to them. If the strip's introduction had gone this way, it might have lasted longer than three years.

The strip that came in second was a spin-off from a popular Saturday morning cartoon show. That strip was Gummi Bears, which debuted with 21 papers. This was a Disney strip syndicated by King Features. At this time it was the most widely syndicated Disney strip but as with US Acres it died out in its third year.

The rest of the rookie strips for 1986 are as follows:

Wish You Were Here, from Walt Munson 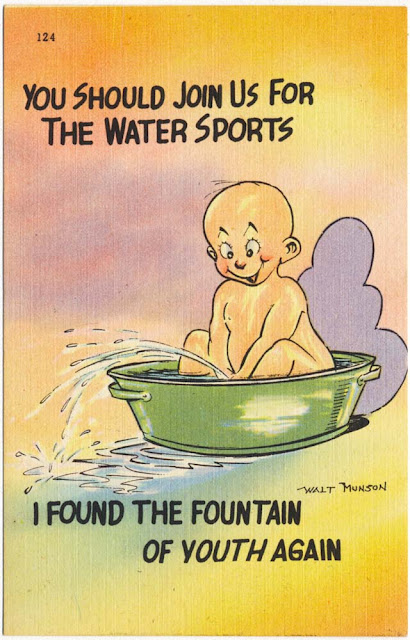 Walt Munson produced a lot of postcards in the so-called "linen period" of postcards. This I think I can be safe in saying was his most popular card design of all, as they are very easy to find. I guess card buyers liked the ever so slightly naughty design, sure to get a chuckle from the receiver.

This card was produced by Tichnor Brothers of Boston, and is designated #124. Although postally unused and undated, I would hazard a guess that the card first appeared in the late 1930s.