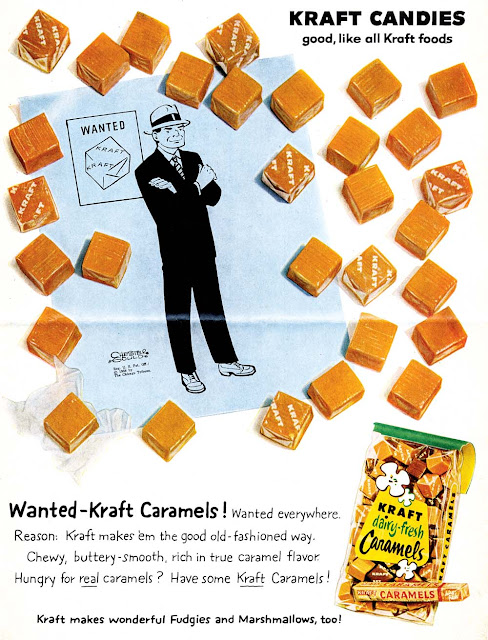 Some marketing makes you scratch your head and wonder just what the heck they were thinking. Now this ad above might not reach a sublime level of irony of, say, Richard Nixon promoting tape recorders, but you really have to wonder why the brainiacs at Kraft Foods thought that it was worth paying good money to license Dick Tracy for this one-off 1959 Life magazine ad for their caramels. Okay, they wanted the motif of a Wanted poster with a Kraft caramel on it. So do that. Everyone knows what a Wanted poster (supposedly) looks like. You can get that across without lining the pockets of the Chicago Tribune-New York News Syndicate. Go to Johnstone & Cushing and tell them you need a cartoon of a police detective type, if that's so near and dear to your hearts. Sheesh.

Sorry about the crease line!

Comments:
Well that cheap Dick Tracy cartoon was right around the corner in 1961 so maybe ol' Chet was missing the cash cow of the Bonnie Braids and Sparkle Plenty dools days.

Hello all-
I think Mr. Cab meant "dolls", as Many years before this, dooling had been outlawed.
Even well before 1959, Tracy had been a licensing bonanza for Chi'Trib and Mr. Gould. There was another popular Dick Tracy character doll, that of B.O. Plenty. There were playtime versions of all accoutrements of law enforcement, from badges to squad cars to tommy guns, all with Tracy's imprimatur. Books,games,watches,movies, radio shows, the whole classic saturation deal. Another huge wave renewed the franchise with the TV toons, and yet another smaller one with the anticipated popularity of the 1990 feature.
That film was not a box office hit, in fact I think it It would seem that that was the last hurrah for Dick Tracy licencing. I don't think he'll be endorsing much again.

This feels like it was intended as one of a series, highlighting different comic strip characters. Note that Tracy is presented as a portrait on a piece of paper, and the layout could as easily serve Little Orphan Annie with slight copy tweaks ("Leapin' lizards, they're tasty!"). Maybe there are more out there, or this was a trial balloon.

I vaguely remember 1960s magazine ads for shock absorbers in the form of Dick Tracy strips. In one, Tracy and Sam blow up one truck in a convoy they suspect is full of counterfeit shock absorbers. Tracy explained (to the villainous driver who landed in a tree) that the truck was visibly carrying less weight, and was therefore carrying the lighter, inferior imitations. Even as a kid, I questioned the legality of planting dynamite under a road and waiting for a suspicious truck.

Tracy did get three serials, four B movies, a TV series, a Batman-flavored pilot, and two animated treatments (UPA's series and Filmation's "Archie's TV Funnies") before the last big-budget hurrah. His pop culture momentum is such that I'm surprised he wasn't recruited to pitch smart watches.

DBenson, you'll be delighted ... or horrified ... to know that I have quite a few of those Dick Tracy car part ads and will inflict them on you Strippers one of these days soon.

I liked the old Dick Tracy radio serial back in the late 1940's.

Hello again-
Did you know there was a TV series starring Ralph Byrd, the hero of the 1930's-40's serials and B pictures?
They were made in 1950-51, ending when Byrd suddenly died.If I recall, he was relaxing on his yacht at the time. Though the programmes were on film, they seem to have all been lost, though I managed to get copies of several (unconnected) episodes a few years ago. I guess that it was so early in syndication history, they were quickly forgotten, though you will notice that no new series with a new actor as Tracy appeared.