It's not your everyday sales pitch.

A card arrives in the morning mail, no return address: “You're so sexy you drive me up a tree. Love. Avalanche.”

“I'm getting ready for you. 'Cause I heard dirty old men need love too! Love. Avalanche.”

The cards went to newspaper editors all over the country this spring, and most of them were intrigued enough to ring the Miami, Florida number and demand “Who's Avalanche?” 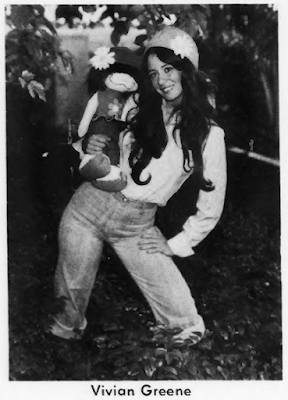 By the time they found out, 27-year-old cartoonist Vivian Greene managed to talk them into taking a serious look at her cartoon strip “Kisses,” syndicated in about 90 newspapers in the U.S. and abroad.

Avalanche is the “Kisses” character most like the strip's creator. Deceptively innocent-looking in jeans, a halter top and mod platform shoes. Into health foods, yoga, horoscopes and woman's lib. Flirtatious. And with a philosophy that you can get anything you want if you're cute enough.

Vivian Greene has a reputation for getting what she wants, and right now it's to make her cartoon strip as successful as Charles Schulz's “Peanuts.” And, if possible, even more profitable.

As a University of Washington Journalism major, she decided to become a syndicated cartoonist—an unusual ambition, considering she couldn't draw.

She dreamed up a kind of elementary school soap opera—involving Avalanche, a dizzy secretary named Gabee, fat Rotunda whose diets always fail and Montgomery C. Roebuck, a sixth grade Phi Beta Kappa. Making rough sketches of the characters, she commissioned artists to do the drawing, and by the time she was 21, landed a contract with a New York syndicate.

But a few weeks before the strip was to be released, the syndicate went bankrupt. A series of part-time jobs proved disastrous, and Ms. Greene finally poured a cup of hot coffee on an insulting boss, was promptly fired, and decided that “If I was ever going to get anywhere
I had to do something on my own.”

Transferring the cartoon characters to a line of 48 greeting cards, she moved to Miami and founded Vivian Greene, Inc.

Within three years the company was doing a multi-million dollar volume of business and Ms. Greene was signing contracts to market Kisses toys, clothing, and gift items.

Her technique of bombarding editors with risque greeting cards signed “Avalanche,” (from her own “Juvenile Delinquent” line) may be unorthodox, but it gets both attention and results.

“But what counts is not the number of papers you sign up," Ms. Greene says.

“It's longevity. Dozens of comic strips don't last past the 13th week.”

“Kisses” has run a year in three large markets—The Toronto Star, Miami Herald, and the Philadelphia Daily News. And, says Peter Morris of the Toronto Star Syndicate, response has been unusually favorable.

“We had an extremely heavy response to a recent readership survey.” Morris said. “There were 1200 replies, with three to one favorable. ‘Kisses' is reaching the youngsters, age five to teenage,
and above that age it's reaching women. Readers seem to feel a strong affinity with the characters.”

Newspaper comic strips tend to be male-oriented, Ms. Greene believes, “because the editors who choose them are middle-aged men.”

“There's very little on the comic pages for children.” she says. “'Kisses' is designed for children. They like the characters because they're really with it.”

The strip's contemporary situations—a child's parents getting divorced. sex education classes, black and white children placed together—have sparked controversy, including a couple of cancellations, she says. But most response has been positive.

“I really relate to children. I never had much of a childhood myself. I only had one parent, and I was just about the only white kid in my neighborhood,” she says.

A native of Seattle, she worked part-time jobs from age 12 to contribute to the family income, including writing articles for the Seattle Post-Intelligencer, a high school column for the Seattle Times, and a “youth news bureau." Her idols were Charles Schulz and Walt Disney. Her mother, a divorcee, earned only about
$4,000 a year as a department store saleswoman.

She never took an art course, still can't draw, but designs and writes her strips, employing four artists to draw them. “It's not a new concept,” she points out. “Walt Disney's work was drawn by staff artists.

“And why not be another Walt Disney?” she asks, giving a big smile, much like her cartoon characters. They're eyeless, she says, because “ 'Kisses' is about love and happiness. When you kiss
somebody you close your eyes and smile.”

“Kisses” characters never hit each other, because she doesn't like violence. Nor will their faces ever appear on packages of candy, soft drinks or sugary cereals, she says emphatically, because those things can harm children.

Success has brought little change to her life style, except that it's enabled her to make up somewhat for the childhood she missed. She bicycles to work, flies around the country to appear at autograph sessions, not infrequently turning up on roller skates with an “Avalanche” doll tucked under her arm.

Still single, she's not sure she'll ever marry because “there're so many neat men in the world, it's hard to choose just one. . . . Too bad marriage can't be syndicated.”