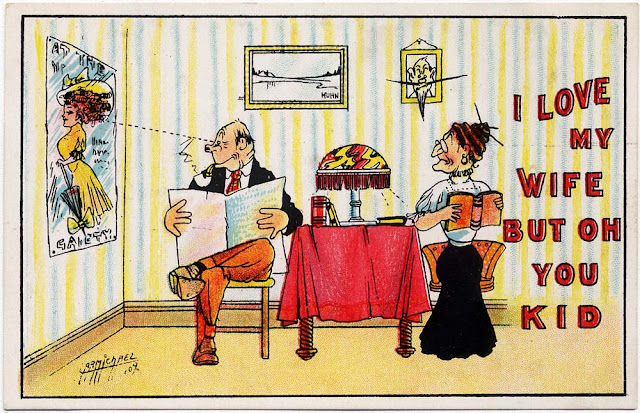 Here's another of Albert Carmichael's "I Love My Wife But Oh You Kid" cards, less glamorously known as Taylor & Pratt Series 565. One starts by wondering why the missus would allow her roving eye mister to put up a theatre poster in their parlour, with or without the example of glorious femininity to attract the eye.

But once you tire of that riddle, you look around and see two other points of interest. First, Mr. Carmichael has inserted a little Easter egg, a landscape painting by fellow New York cartoonist Walt Kuhn. Mr. Kuhn at this time (1910) was in the processing of becoming a Big Name in the fine art world.

Second, and fascinating to me, is the portrait in which the fellow's whiskers break the bounds of the picture. This is a gag that would be extensively and famously used by George McManus in Bringing Up Father, but I'm pretty sure that he didn't really start putting his 'living pictures' on Jiggs' walls until the 1930s (1920s maybe?). I certainly can't imagine that Carmichael invented the gag here, but what a bit of kismet that McManus' acolyte, Carmichael, seems to have beaten George to the punch in this regard.