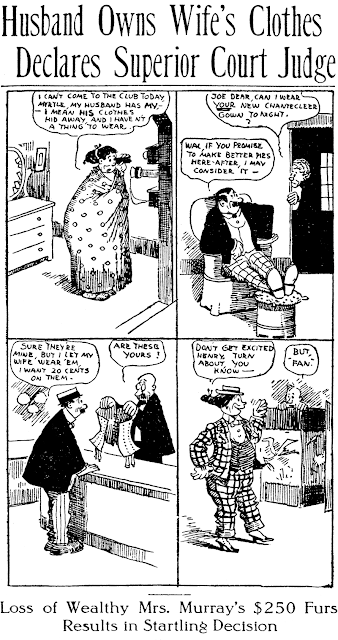 A man brings lawsuit against a hotel, because his wife's expensive furs were stolen during their stay. The opposing legal team brings up an important point -- does the husband actually have the right to bring suit when the clothes stolen were not his but his wife's? The judge asks the man if he paid for his wife's clothes. Yes, is the answer. Did he specifically state to her that the clothes were given to her as gifts? No, is the answer. The judge rules then that the clothes belong to the husband, not the wife, and he is within his rights to bring suit. His better half merely wears those things, while ownership stays squarely with the purchaser.

While the newspapers play up the anti-feminist aspect of this ruling, in fact, says legal scholar 'Stripper' Holtz, that judge in 1910 seems like he was on solid ground. Feminism, suffrage, women's rights, etc., just don't enter into the calculus of this situation, one in which merely the ownership of an article is determined by who paid for it.