In the 1940s Al Capp started making the rounds of the radio talk shows, and he also became a popular guest on early TV. Intrigued by the new technology, in 1952 Capp created two new programs for the young medium. One was a puppet show featuring his character Fearless Fosdick, and the other was a 15-minute weekly show featuring Capp himself, simply titled The Al Capp Show.

In the latter show Capp offered his views, which while not quite as incendiary as they would later become, were already well capable of ruffling feathers. One of his lighter episodes, though, consisted of him explaining how to use terms like shlemiel and schnook. Hopefully in the episode he gave credit where due for these Yiddishisms, but in the TV Guide edition of October 10-16 1952 they offered a summary of the program in which the less lexically knowledgeable would be left believing that Capp came up with these terms himself. Thanks to Mark Johnson, here's the cover and article: 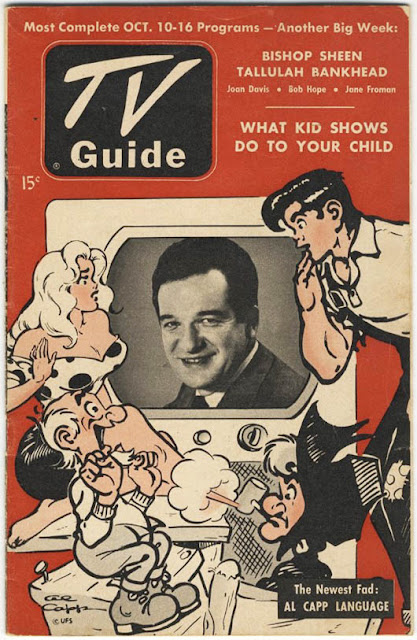 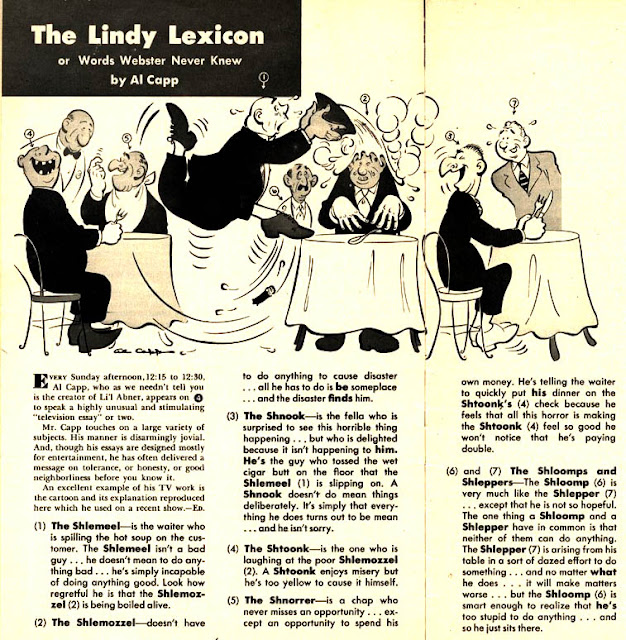 The Al Capp Show was 15 minutes long and ran at 12:15 PM on Saturdays, at least at the New York station where it originated. The program lasted about six months, with the first episode airing on July 12 and the last on December 27 1952. As far as I know there is no surviving video of any of the shows. However, this review gives a pretty good idea of what you would have seen; sounds like fun: 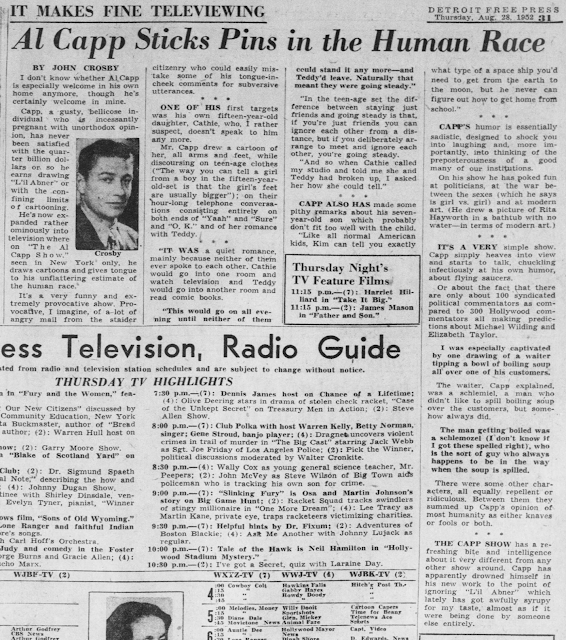 At least a few episodes of the Fearless Fosdick puppet show have survived, and here's the first episode of the series. While the story moves along at a deadly slow pace, and the sparse gags are hit and miss, you can't help but be impressed by the puppetry work:

Comments:
Hi Allan,
Thanks for this unusual Al Capp post. I have never seen one of the Fearless Fosdick TV shows before. As you mentioned, the comedy takes second fiddle to the marionette manipulation. The puppets don't really resemble Al Capp's drawing style too closely, but they are well designed, for 1951 marionettes. Even MORE interesting is that Al Capp isn't even mentioned ONCE and doesn't get the copyright line, a Mr. Cowan receives it instead. I think Dennis Kitchen has the complete run of the Fosdick TV show. In one of the L'il Abner reprint books, there is a good run-down on the program, and many good stills are used as illustrations.
Mark Kausler

Great info on Al Capp. The Fearless Fosdick marionettes looked great, and I also have never seen one of these episodes before. My favorite character was Fosdick's assistant "Shmoozer" who looks like a Shmoo (with ears and arms), with his bowling pin shape and funky whiskers. Capp was credited once, at the beginning of the episode where it was stated that the characters were based on Al Capp's famous (though unnamed) comic strip. Bob Carlin