Claude Edwin “Ed” Reed was born on December 13, 1907, in Fort Towson, Oklahoma, according to his World War II draft card.
In the 1920 U.S. Federal Census, Reed was in the household of an uncle, Thomas J. Record, in Paris, Texas at 146 South 22. The fate of Reed’s parents is not known.
Reed attended Paris High School where he graduated in 1925. He produced eleven illustrations for the 1925 school yearbook, The Owl. Reed was sports editor of the school newspaper, Hi Hoots. 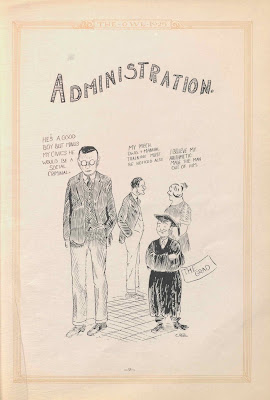 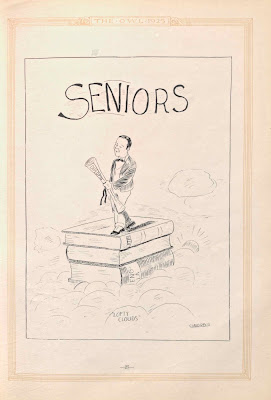 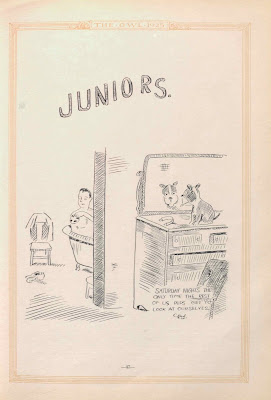 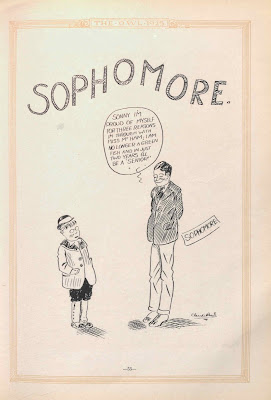 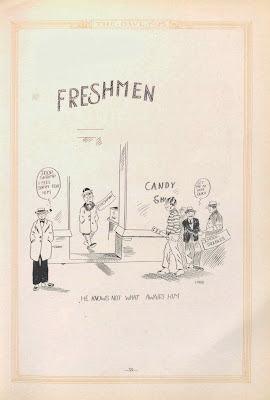 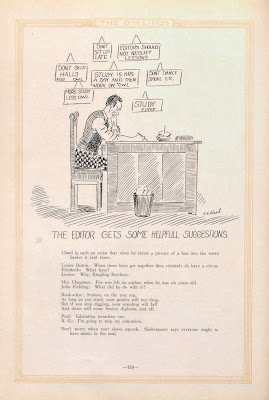 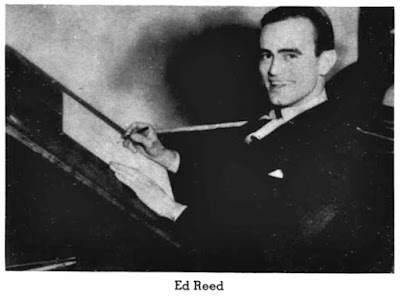 … After Ed had finished high school in Paris he studied at the Chicago Academy of Fine Arts. In 1929 he began to his sketches to the New Yorker, Life, and Judge. He contributed to the mid-depression torrent of comic magazines and their success. He lived a sort of gag-to-mouth existence, some weeks finding many of his ideas accepted, others none.
Reed estimates that between 1930 and 1934 he lived on an average of less than $7.50 per week. Much of this was eaten up in buying drawing materials for more submissions. He became an avid reader of newspaper classified advertising sections, and today turns to classified out of habit rather than out of need for a new job.
In 1934 he began drawing his daily square three times each week for the Dallas Journal, and its syndication, on a daily basis, was begun some months later by the Register and Tribune Syndicate of Des Moines, Iowa. …
… Those who knew Ed Reed when he came to Des Moines in 1934 with nothing but a big ambition and a bright new quarter, say that success has changed him not at all. He’s the same hardworking, sincere, appreciative lad he was then. He puts his money in the bank for the stormy day he hopes will never come. He is like a schoolboy with a new nickel every time he gets a fan letter (and he answers every one of them).

Ed Reed and Mary Cullum Marry Today
Couple Wed in Dallas in Bride’s Home.
The marriage of Miss Mary Anne Cullum, daughter of Mr. and Mrs. A. Earl Cullum of Dallas, Tex. and Ed Reed of Des Moines, formerly of Dallas, is taking place Monday afternoon at the Cullum home. Only members of the immediate families are witnessing the ceremony being performed by the Rev. Jasper Manton, pastor of Trinity Presbyterian church and a boyhood friend of Mr. Reed. The couple will leave immediately for Des Moines. The bride has been a member of the amusements department staff of the Dallas News and Journal. She is a former student of the University of Texas and a graduate of Radcliffe college. Mr. Reed draws Off The Record cartoons. He was graduated from high school in Paris, Tex., and attended the Academy of Fine Arts in Chicago. He and his bride will reside in the Cortez apartments.

Editor and Publisher, January 16, 1937, published a photograph of the newlyweds.
The 1940 census recorded Reed and his wife in the household of his father-in-law, A.E. Cullum. They resided in Dallas.
On October 16, 1940, Reed signed his World War II draft card. His address was 3623 Overbrook Drive in Dallas. Reed’s employer was the Register and Tribune Syndicate. His description was five feet eleven inches, 195 pounds, with brown eyes and hair.
The Paris News (Texas), December 17, 1990, said Reed moved to "London, England, in 1958. In 1960, he bought a 400-year-old home, Hawstead House, in the village of Broadway (England’s equivalent of Greenwich Village)”. Cartoonist Profiles #37, March 1978, printed two photographs of Reed at home and four Off the Record cartoons.
Reed passed away on October 7, 1990, in Cheltenham, England. The Fort Worth Star-Telegram (Texas), October 11, 1990, published an obituary.

Ed Reed, a retired nationally syndicated cartoonist, died of leukemia Sunday at a hospital in Cheltenham, England. He was 82. During the 1940s Mr. Reed was a cartoonist for the now-defunct Dallas Journal. He was syndicated in more than 400 newspapers across the United States and Europe. Off the Record and Three Bares were two of Mr. Reed’s many cartoons. Mr. Reed was a native of Paris and earned an art degree from the Chicago Academy of Fine Arts. He started at the Journal after college. He retired during the mid-1980s and moved to Europe. Funeral: Monday at St. Saviour’s Catholic church in Broadway, England Survivor: Wife Mary Anne Reed of Broadway.