A One Shot Wonder: The Queer Life of Dipsy Beans 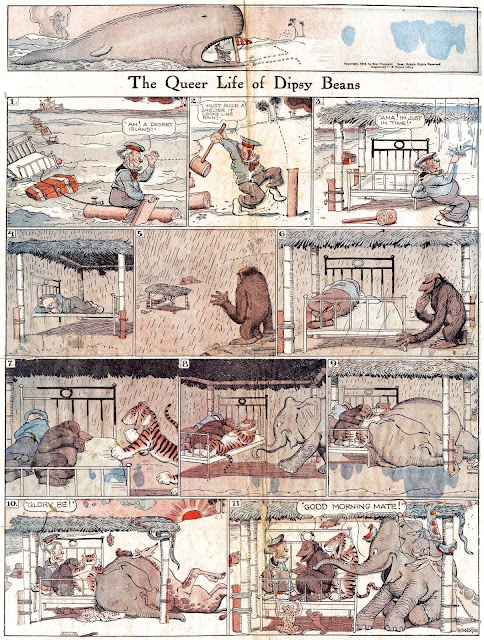 About six years ago we covered an obscurity titled In The Good Old Days, a Sunday strip produced by Jimmy Swinnerton in 1918-19 as a temporary replacement for his bread and butter strip, Little Jimmy. What I failed to mention at the time is that the week before that strip began, Swinnerton did a one-shot called The Queer Life of Dipsy Beans. Oddly this one-shot has a lot in common with In the Good Old Days; both were about a sailor (Noah in the latter case) and his animal friends. And, in fact, the one-shot really reads like the beginning of a series. Why Swinnerton did the sudden about-face I have no idea.

The other thing you need to know about this one-shot is that it is documented in my book as running for two weeks, which it didn't. I got messed up by trying to triangulate between two papers which ran the one-shot a week apart, giving the illusion, if you don't have the strips in front of you at the same time, that the 'series' ran two weeks. So mea culpa, and take a Sharpie to listing #5223 in my book.

Comments:
Fun! It does indeed have the makings of a series. Too bad it didn't happen. If I were young and energetic, I would do it!

Hello Allan-
This might be another time that a "Pilot" was used long after anyone considered its possibility as a series, which seemed to happen several times with Swinnerton art around 1910. Notice he didn't include the year "18" in his signature, as he usually did. It could be a few years old. The format here starts about 1914. The title type font however, started closer to 1916 or 17.
Why would there be such a thing? Might be a ready to use piece of art to use as an emergency if regular art wasn't ready in time.
I wish I could recall, but I don't know what paper my brother pulled this from. It would seem like the colours seen in an inside Hearst section, but could be in a big city client paper as well. I say this because most clients would often still run inside pages in one colour. Also, as he had a volume of June 1918 Los Angles Examiner, a top paper in the Hearst chain, and Queer Bean Dip didn't appear there.

The page seems to have had general distribution to Hearst papers and clients who were using Jimmy. The copy in my collection is from the Atlanta American, and got the full color outside page treatment there.

Good note about the lack of year in Swin's signature. He was generally pretty good about that, so it may be a K-Mart blue light special end of season clearance item.