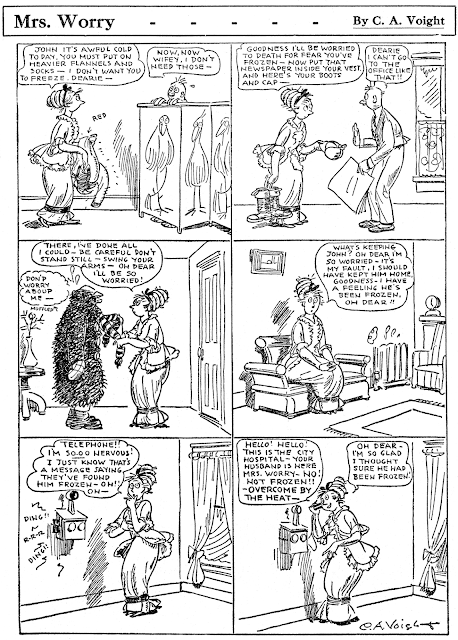 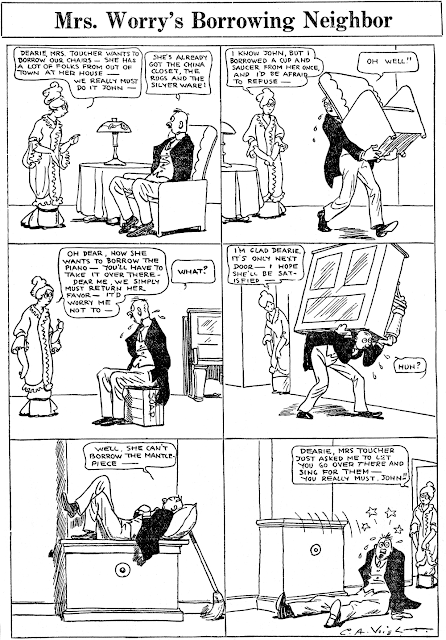 When C.A. Voight moved to the New York Evening Globe in 1910, he brought along his best strip from the Boston Traveler, Gink and Dink, and created additional new strips to run in tandem with it. One of them was Mrs. Worry, about a ... well, you can guess the subject matter I suppose.

Mrs. Worry started on December 12 1910*, but didn't last long there because Voight promptly jumped ship to the New York Evening Mail mere months later. His last Mrs. Worry appeared in the Globe on January 3 1911, and appeared in the Mail starting on March 27.

It continued running in tandem with Gink and Dink and Voight's other strips  until early 1914, when Voight changed gears and decided to put all his eggs in one basket, with the quasi-new strip, Petey Dink. The last Mrs. Worry installment appeared on June 27 1914. But by then he'd tried playing around with the formula a bit, and the title had been Ishood Worry since May 16 1914.

* Source: All dates from Jeffrey Lindenblatt's index of the New York Mail and New York Globe.