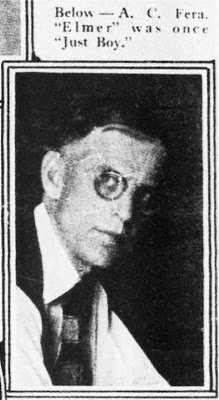 Adolph Christian Fera was born on September 14, 1877, in Danville, Illinois, according to his Social Security application at Ancestry.com. His parents were Charles A. Fera and Mary E. Gilman who married on October 26, 1875 in Terre Haute, Indiana.
In the 1880 United States Census, Fera, his parents and younger brother, Gilman, lived in Danville. Fera’s father was a merchant.
Apparently Fera served during the Spanish-American War. His name appeared in the Official Register of the United States, Officers and Employees of the Civil, Military, and Naval Service, July 1, 1899, Volume 1.
On August 23, 1902, Fera married Miss E. Baunn in Alexandria, Virginia. It was the first of three marriages.
The beginning of Fera’s cartooning education and career is not known. The Billings Gazette (Montana), July 26, 1907, said Fera was a cartoonist on the Chicago Examiner. In the book, Artists in California 1786–1940, the author, Edan Hughes said “Fera settled in Los Angeles in 1909. For many years he worked there as a cartoonist for the Hearst papers.”
American Newspaper Comics (2012) said Fera’s strips include What You Lafin’ At? (1909); Oh, There Goes My Car (1909); Just Boy (1914, continued by Doc Winner in 1926); and An Embarrassing Moment (1916, with Fred Locher).
In the 1910 census, Fera lived with his father and aunt in South Pasadena at 1218 Fremont Avenue. Fera’s occupation was newspaper cartoonist. That same year a collection of his cartoons was published under the title, Post Cards of a Tourist (Mr. ‘Skinny’ East): Cartoons of Southern California. Below is a partial description from Art Books, 1876–1949 (1981).

Almost seven weeks after the census enumeration, Fera married Dorothy V. Quincey on June 10, 1910 in Los Angeles. Fera’s third marriage was to Mabel L. Jamieson on February 8, 1913 in Los Angeles.
Fera signed his World War I draft card on September 12, 1918. He was a Los Angeles-based cartoonist working for the Newspaper Feature Service which was in New York. He was described as tall and slender with gray eyes and dark hair.
Editor and Publisher, April 24, 1919, published a King Features Syndicate advertisement that included Fera’s Just Boy.
The 1920 census said Fera had two sons, Gilman and Donald. The family of four lived in Los Angeles on Western Avenue.
Editor and Publisher, April 30, 1921, reported the American Newspaper Publishers’ Association convention dinner at the Friars Club. Fera was one of the Hearst stars to attend.
Fera was included in Our American Humorists (1922).
The Sierra Madre News, March 23, 1928, said Fera was a member of the Cartoonists Dinner Club.
In 1924, Fera was a registered voter. The Republican resided at 943 South New Hampshire Avenue. The same address was recorded in the 1930 census and 1932 Los Angeles city directory.
Fera has not yet been found in the 1940 census. Fera’s son, Gilman, signed his World War II draft card on October 16, 1940. He lived with his parents in Los Angeles at 1463 West Washington.
Fera was mentioned in King News: An Autobiography (1941).
Fera passed away on June 15, 1941 in Los Angeles, according to the California Death Index.