Jeff/Geoff Hayes was born Thomas Geoff Hayes on June 8, 1903, in Newburgh, New York, according to his World War II draft card. His parents were Thomas J. Hayes and Mary Daly who married on October 2, 1895 in Newburgh.
The 1910 U.S. Federal Census said Hayes was the second of four siblings. The household included his parents and aunt, Ella Daly. They lived in Newburgh at 67 Courtney Avenue. Hayes father was a U.S. Postal Service letter carrier.
The 1915 New York state census said a fifth child was in the Hayes family. They were, in birth order, Helen, Jeffrey, Jack, Mildred and Thomas. The address was the same.
The Newburgh News, January 26, 1953, said Hayes attended the Liberty Street School and Newburgh Free Academy.
One of Hayes’ projects was noted in the Newburgh Daily News, December 10, 1921.

Books of Carols in Much Demand
A few days ago the music committee of the Newburgh Community Service placed over 2,000 Community Christmas carol books in the hands of local dealers, who are selling them at five cents. The demand has been so great that the supply quickly vanished and 2,000 more copies have been secured and are now on sale in the following places: ... Posters made by Joseph Moore and Geoffrey Hayes, artist and cartoonist respectively of the Newburgh Academy will be set up in places selling the carols. ...

Hayes graduated on June 28, 1922 according to the Newburgh Daily News. Hayes contributed several illustrations to the school yearbook, The Academy Graduate. His senior entry had the name “T. Geoffrey Hayes’. 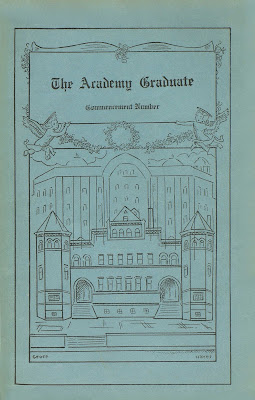 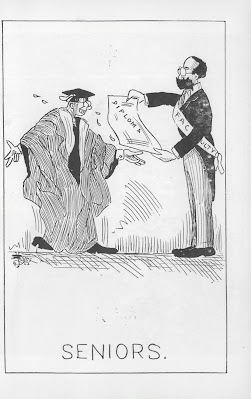 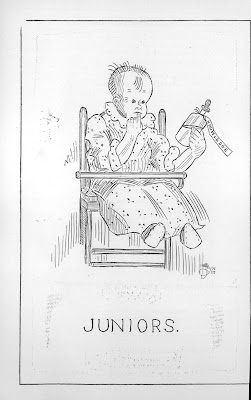 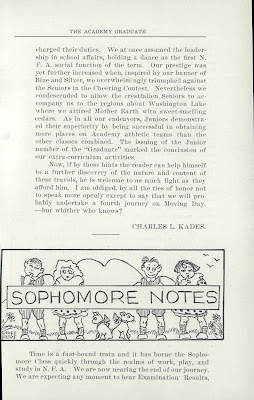 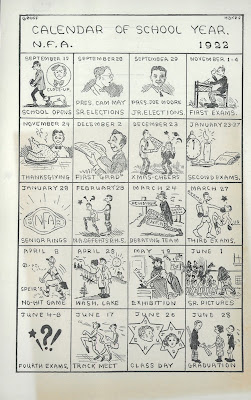 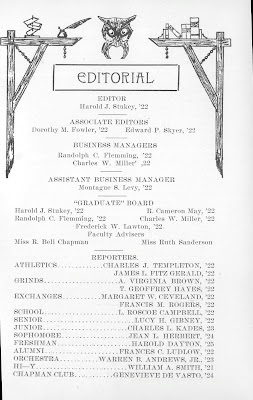 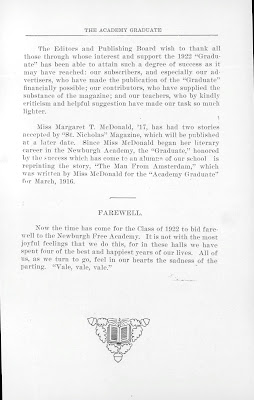 The Newburgh Daily News, September 14, 1923, said Hayes was leaving soon to enroll at the Art Students’ League in New York City.
The 1925 New York state census said Hayes was a New York City resident and student at 318 West 57th, Street, a block away from the Art Students’ League.
From 1923 to 1927, the Newburgh city directory listed “Geoffrey T Hayes” as a student at 67 Courtney Avenue. Beginning in 1928, his occupation was cartoonist.
Apparently Hayes was counted twice in the 1930 census. He was counted in his widow mother’s household, in Newburgh, which included his sisters, brother and aunt. There was a newspaper artist, “Geoffrey Hayes”, residing in Brooklyn at 30 St. James Place.
In the early 1930s, Hayes married Josephine R. Sawinski. Their daughter, Regina June Hayes was born on June 2, 1034 in Queens, New York City, New York. Her nickname was “Honey” and she was mentioned in L.L. Stevenson’ column “Lights of New York” in the Evening Recorder (Amsterdam, New York), August 21, 1939.

Mistake: Honey Hayes is 5 years old. She has flaxen hair, blue eyes, a merry little smile and, in other words, lives right up to her name. The other afternoon, her father, Jeff Hayes, when he got caught up with his art work, took Honey out to the World’s Fair. Some time after darkness had fallen, Honey and her father went into Morris Gest’s Miracle Town. As it does sometimes out on Flushing Meadows, the air had turned cool so, while they watched the midgets go through their routines, Jeff slipped his coat over his daughter’s shoulders. Naturally it drooped a little and changed Honey’s appearance completely. With Honey so clad, they wandered over to the place where, if you wish, you may have your tin-type taken with a midget of your choice. And didn’t a big, husky truck driver come up, look Honey over and pointing at her, declared loudly, “I’ll have my picture taken with that one!”

In the 1940 census, Hayes, his wife and daughter were Bronx residents at 291 Hollywood Avenue. Hayes was a newspaper commercial artist. He earned $2,550 in 1939.
On February 15, 1942, Hayes signed his World War II draft card. His address was the same. Hayes’ employer was the Bell Syndicate. He was described as five feet seven inches, 160 pounds, with brown eyes and hair.
The Newburgh Daily News, April 7, 1945, profiled Hayes.

Jeff Hayes, Home Town Youth, Makes Good in Cartoon Work
If you know the authors of your favorite comic strips, you’ve no doubt come across the name of Jeff Hayes and wondered why it sounds familiar. The explanation is simply that Jeff is a hometown boy who made good.
In the early part of March a picture of the cartoonist, sponsoring a brand of pipes, was printed in the New. One of Jeff’s school chums here recognized the picture and promptly proceeded to get into touch with him. Shortly afterward a letter from Jeff made its way back to Newburgh, in which he modestly summed up his career since graduation from High School in 1922.
Jeff writes: “After I finished high school I came to New York and went to the Art Students’ League tor a year, but didn’t learn too much. Then I got a job in the ad—art department of New York Journal, where I stayed for 12 years. From there I went to King Features and next New York News. Finally about six years ago I came to the Bell Syndicate as a staff artist.”
Among the cartoonist’s most popular comic strips is “Adamson’s Adventures”, sometimes known as “Silent Sam”, and “Witty Kitty.” He also does a Christmas strip and Christmas shopping comics. Seems to be quite versatile this hometown In a further discussion of the boy!
‘Never Could Dance’
Then of course came time for reminiscing. “Sure, I remember Aladorf’s—and I’ll bet that any girl I danced with remembers it too—I never could dance.” Jeff wrote, “When I think back, what a lot of names pop up—Bill Fink, Andy Calyer, Hicks Bellinger, Ike McKeever.” No doubt he could have gone on for pages.
To bring things up to date he talks of his wife Jo and his daughter. Accompanying descriptive  paragraphs of the two women in his life, he included sketches of the family of three. His wife, he explained, is his model for the girls in his lectures and his daughter is the little girl in the Christmas strips.
Jeff concluded his letter with best wishes to old friends in Newburgh and a promise to visit the town sometime in the future.

According to the 1950 census, the Hayes family lived in Taunton, Massachusetts at 497 West Britannia, downstairs. The head of the household was Hayes’ father-in-law, Joseph Sawinski. Hayes was a newspaper cartoonist.
American Newspaper Comics (2012) said “Geoff Hayes” produced the following series: After the Honeymoon, from September 16, 1927 to July 19, 1928; Jane and Fred’s Christmas Adventure, from November 27, to December 23, 1939; A Visit to Santa Claus, from November 24, to December 24, 1941; and Mister Smith Goes to Santaland, from November 29, to December 24, 1943. Credited as “Jeff Hayes”, he did Adamson’s Adventures from 1945 to 1953; and Chip from March 3, 1952 to 1962. Hayes said he drew Witty Kitty, uncredited, for a period of time. Hayes’ Silent Sam strip appeared in a handful of New York state newspapers from 1945 to 1951.
Hayes’ Chip strip was featured in Editor & Publisher, February 2, 1952.
The Seattle Times (Washington), August 19, 1954, reported Hayes’ daughter’s cartooning ambition.

Daughter Wants to Be ‘Chip’ Off Old Block
Jeff Hayes, cartoonist, paid a visit to The Seattle Times, one of some 100 newspapers across the nation carrying his quip-a-day cartoon, “Chip.” Hayes let drop a little secret of his trade.
“Most every comic-strip character changes (in appearance),” Hayes declared, “but the changes are made so gradually that the reader doesn’t notice them.
“For instance, if you would look back in newspaper files to the time when I started ‘Chip’ nearly three years ago, it might startle you to see how different he looked then.
“As the cartoonist gets to know his character, he changes him, but not rapidly so that the reader would notice.”
Career Began in N.Y.
Hayes began cartooning some 30 years ago on The New York Journal-American, and became successful enough in the big city to move to a small town. He now lives in Tauton, Mass.
“I spent years as a ‘stooge’ before starting a character of my own,” Hayes said. ‘Stooge,’ Hayes explained, is cartoonists’ parlance for a perhaps well-paid but anonymous wretch who draws for one of the established artists. His stuff never appears over his own signature.
“A cartoonist has got to draw something he knows. Now I’d never been to China with the Air Force, or off on a space ship or reared by apes in the jungles of Africa. But I did know something about kids.
‘Chip’ Was Started
“So I started ‘Chip.’…At first, I did some of my own selling, walking in on managing editors, and pulling ‘Chip’ out of my briefcase.”
Hayes visited Seattle en route home from a month-long U.S.O. tour of isolated Army and Air Force bases in Alaska. He was part of a 12-person party sent out by the National Cartoonists’ Society. The group did chalk-talk routines.
Hayes was accompanied by his 20-year-old daughter, Honey, a runner-up in a recent “Miss Massachusetts” contest.
Honey, a student at Durfee Tech, in Fall River, Mass., wants to be a cartoonist like her dad.

Jeff Hayes, Cartoonist, in Hospital
Cartoonist Jeff Hayes, who is a native of Newburgh, is a patient in Pondville Hospital at Norfolk, Mass.
Mr. Hayes and his wife, Josephine, reside at 31 Lillian Terrace in Taunton, Mass. Their daughter, Mrs. June Regina (Honey) also lives in Taunton with her husband and two daughters, June and Mary.
Mr. Hayes, a 1922 graduate of Newburgh Free Academy, was born in Newburgh June 8, 1903. His parents were the late Thomas and Mary Daly Hayes.
He went to New York City to attend the Art Students League and was the author of a number of comic strips, including “Chips” which appeared in The Evening News at one time.
He has two sisters in Newburgh, Miss Helen and Miss Mildred Hayes, at 67 Courtney Avenue.
Before his illness, Mr. Hayes, his daughter and their poodle “Pierre” conducted a Saturday morning television show in Taunton.

Jeff Hayes, Cartoonist, Dies at 62
Jeff Hayes, 62, a native of Newburgh died in Rose Hawthorne Home, Fall River, Mass., on Thursday (March 10, 1966.)
Mr. Hayes, a well-known cartoonist, was born in Newburgh June 8, 1903, son of the late Thomas and Mary Daly Hayes. He was a 1922 graduate of Newburgh Free Academy.
He attended the Art Students League in New York City and was author of the comic strip “Chips.” He and his daughter and their pet poodle were featured on a television show in Taunton, Mass., before his illness.
His home was at 31 Lillian Ter. in Taunton.
Surviving are his widow, Josephine; a daughter, Mrs. June Regina Calvey; two grandchildren, June and Mary Calvey; all in Taunton; and two sisters, Miss Helen and Miss Mildred Hayes of Newburgh.
Funeral arrangements have not been completed.

Find a Grave said Hayes died on March 11 and was laid to rest at Saint Joseph Cemetery.