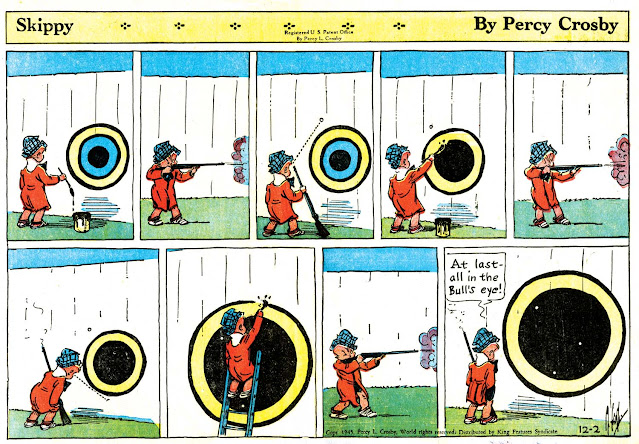 If you haven't read Jerry Robinson's biography of Percy Crosby (Skippy and Percy Crosby, Holt Rinehart Winston, 1978) you should -- it's one heckuva read describing a cartoonist's life of incredible highs and lows. In 1945 Percy Crosby was already depressed over a divorce, tax problems, the plummeting circulation of his strip, and the reduction of his Sunday from a full page to a lowly half. The final shoe dropped in December of that year when the Skippy comic strip was cancelled outright, a victim not just of lower popularity but of the syndicate being tired of dealing with its mercurial creator.

Here is the final Skippy Sunday, dated December 2 1945. I've been seeking these late Skippy strips for decades now and finally stumbled across this one recently. It ran in the Ashland Daily Independent.

According to Jerry Robinson, the daily ran one further week, ending on December 8. But Jeffrey Lindenblatt has proven beyond a reasonable doubt that is not so. He documented a half-dozen newspapers that all ended Skippy on November 17. This date actually make s a lot of sense if the syndicate fired Crosby and the strip ended with the material they had on hand. Sundays have a much more involved production process to run through before they see print, so King would have had at least a few more weeks of them than dailies. With that in mind, I have changed my end date for the Skippy daily based on Lindenblatt's proof.