Paul Barton “Bart” Tumey was born on July 24, 1912, in Wichita, Kansas, according to his World War II draft card.
In the 1920 United States Census, Tumey was the youngest of two children born to Lemuel, a farmer, and Martha. They resided in Marion, Iowa.
Tumey has not yet been found in the 1930 census.
Information about his art training is a mystery. At some point Tumey moved to Chicago.
Tumey was interested in comics and aviation. His question was published in Dick Calkins’ Skyroads strip which appeared in Illinois State Journal, (Springfield, Illinois), June 26, 1933.

His question was answered the following day. 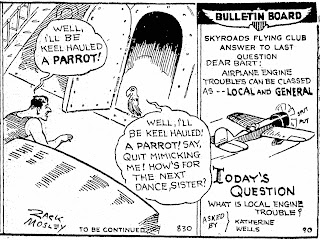 The Skyroads artist was Zack Mosley who, years later, briefly figured in Tumey’s career.
The Cook County, Illinois Marriage Index, at Ancestry.com, said Tumey and Beulahbelle Hurd married on September 17, 1938. She was a Chicago native born on July 12, 1915. Who’s Who of American Comic Books 1928–1999 said Tumey married artist Janice Valleau but that is incorrect. (Valleau and Edward H. Winkleman were engaged in November 1947 and married in June 1948.) 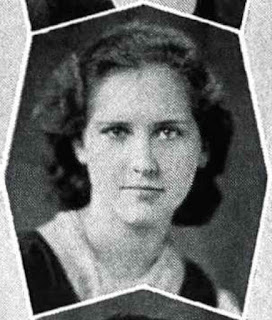 Beulahbelle Hurd, Lindblom Technical
High School, Chicago, Illinois, 1933.
The 1940 census counted Tumey and his wife in his mother’s household which included his sister. They lived on East Monroe in Mount Pleasant, Iowa. Tumey was a freelance cartoonist who had two years of college. Later that year he moved to New York.
On October 16, 1940, Tumey signed his World War II draft card. His address was 10 Ruxton Road in Port Washington, New York. He worked for Zack Mosley who lived in Sands Point, Port Washington, New York. 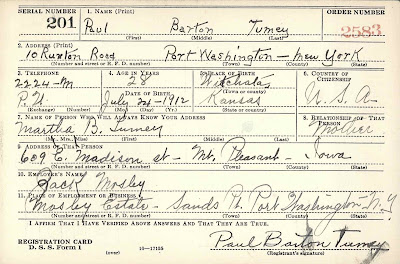 It’s not clear if Tumey ghosted Mosley’s Smilin’ Jack. In American Newspaper Comics (2012), Alberto Becattini said Boody Rogers drew Smilin’ Jack from 1936 to 1942 while Mosley spent a lot time flying. (See Popular Aviation, February 1939, “The House That Smilin’ Jack Built”.)
Eventually, Tumey found work in the comic book field. He created Dan’l Flannel for Novelty Press. The character debuted in 4 Most #3, Summer 1942. Tumey used his wife’s name, Beulahbelle, for the lead female character.
Tumey enlisted in the Army on May 12, 1943. His veteran’s file said he was discharged on October 29, 1945.
Tumey was mentioned in Stars Without Garters!: The Memoirs of Two Gay GI’s in WWII (1996).

… The newspaper staff published a daily which introduced a new cartoon, “Private Pokey,” created by Corporal Bart Tumey. “Private Pokey” was picked up by Yank and eventually syndicated in civilian papers.

Some of Tumey’s Private Pokey cartoons can be viewed at Heritage Auctions. The cartoons were signed and said Tumey was in the 34th Special Service Company which provided entertainment.
After the war Tumey returned to New York City. The 1950 census said he was married and lived alone at 60 West 92nd Street, B-4. The Grand Comics Database said Tumey’s comic book career spanned from 1939 to 1953.
During the 1950s and 1960s, Tumey was one of many cartoonists who did gag cartoons for farm and agriculture periodicals. Here are Tumey cartoons in The Feed Bag: December 1957, February 1958, June 1958, August 1958, February 1961, February 1962, and July 1962. Other publications with Tumey cartoons are Farm Store Merchandising and Grain Age.
The Writer’s Market, Volume 18, (1961), had an entry for Tumey.

Bart Tumey, 2820A W. Vliet St., Milwaukee 8, Wis. There is non limit to the gags per batch Mr. Tumey will look at. However, he wants industrial gags only, for which he will pay a 25% commission.