Although the headline says this is a mystery strip post, this one's not so much mysterious as just so exceedingly rare I don't really know what to do with it.We're going to cover the whole range of a syndicate's offerings today, the comics of Argonaut Entertainment.

Never heard of them? Well, you're not alone. I'd never heard of them until Charles Brubaker stumbled upon a whole page's worth of unfamiliar comics in a 1994 issue of the Gaffney (SC) Ledger. Here's a sample: 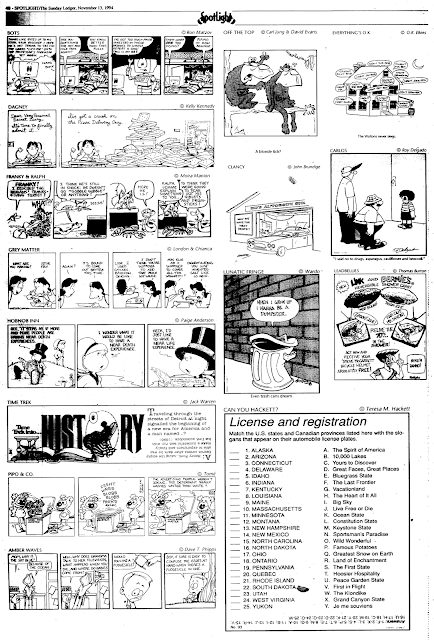 The lineup consists of Bots by Ron Matzov, Dagney by Kelly Kennedy, Franky and Ralph by Moira Manion, Grey Matter by London and Chianca, Hobnob Inn by Paige Anderson, Time Trek by Jack Warren, Pipo and Company by Tomé, Amber Waves by Dave T. Phipps, Off The Top by Carl Jung and David Evans, Everything's O.K. by O.K. Elkins, Clancy by John Brundige, Carlos by Roy Delgado, Lunatic Fringe by Wardo, and Leadbellies by Thomas Burton.

The only feature with which I was familiar was Phipps' Amber Waves, which was later syndicated by King Features Weekly Service, and continues to this day as far as I know.

This lineup stayed consist through the entire run in the Gaffney Ledger. And here's where we get to the problem. The Gaffney Ledger, a thrice weekly paper, ran the page from November 6 to December 4 in their 'experimental' Sunday edition (the longstanding Monday edition moved to Sunday and added a few extra features) -- a total of five times. The paper announced after this five week trial run that the Sunday paper had not been the big seller they were hoping for, so they moved it back to Monday and dropped the extra features, including the page from Argonaut Entertainment.

So not only did I have a mysterious page of ultra-obscure comics, but with a five week run I had to ask myself whether it qualified for listing in my Stripper's Guide database. After all, I have said in the past that features that appear only in 'test runs' don't qualify -- they have to be used as regular features. They might have really, really short runs, but they can't just be mere samples.

So, more digging, and I eventually came up with another run, this time in the Charlottesville (VA) Observer. This was a year earlier, and lasted ... hmm, what a coincidence ... five weekly appearances. The page ran from August 5 to September 2. The line-up changed slightly each week. Here's a sample page: 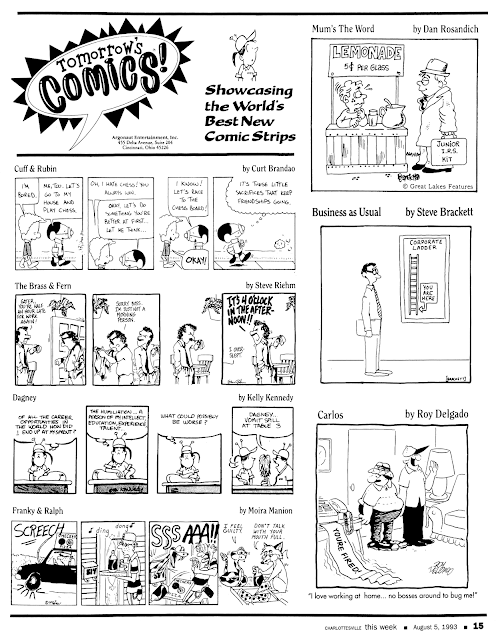 The complete line-up over the five week period was as follows (number in parentheses is a count of the times the feature appeared): Cuff & Rubin by Curt Brandao (5), The Brass & Fern by Steve Riehm (5), Dagney by Kelly Kennedy (2), Franky & Ralph by Moira Manion (5), The Purple Ort by Dan Fikes (4), The Art of Living by Valerie Costantino (2), Mum's The Word by Dan Rosandich (2), Business As Usual by Steve Brackett (2), Carlos by Roy Delgado (3), Leadbellies by Thomas Burton (3), At A Glance by Michael J. Saporito (3), Everything's O.K. by O.K. Elkins (4), and The Real World by Steve McNeon (1).

Now with a second sample run in hand, we at least also had a syndicate name and the headline "Tomorrow's Comics." That was the clue that helped answer the big question, "Just what the heck is this stuff?"

It turns out that Argonaut Entertainment was primarily a creator of comic book inserts for college newspapers. The name of the comic book? Tomorrow's Comics, of course. There are apparently seven known issues, and you can see one of them here appearing in the Oregon Daily Emerald, and here in the Miami Hurricane. The comic books offered readers short runs of a big batch of daily style strips by what they billed as some of the brightest young undiscovered cartoonists. It was actually not a bad idea, and the publisher obviously had standards, because most of the strips are gifted amateur to semi-professional level. Learning the name of the publisher also led me to this advertisement in Editor & Publisher, from July 28 1990: 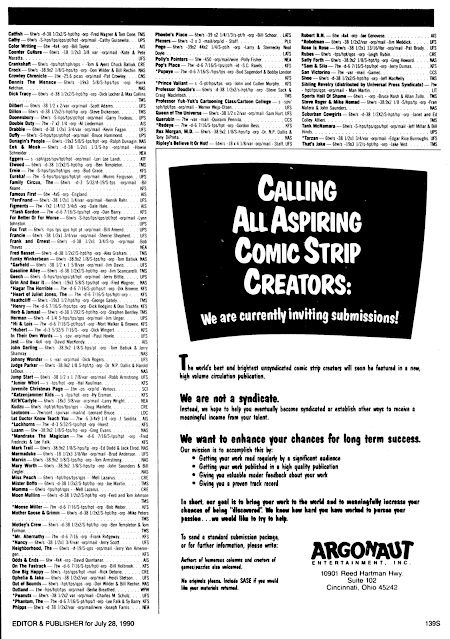 And I found that the publisher's Tomorrow Comics page was offered in the E&P listings from 1991-94. Whether they had any takers in mainstream papers beyond test runs is, of course, the $64 question. So please Please PLEASE if you know of a paper that ran the page on a regular ongoing basis, contact me so that all these features can find a permanent place in the Stripper's Guide database. Or, if you know anything about the syndication, or are one of the creators, I'd love to hear your story.

I found a few other interesting tidbits while trolling the interwebs looking for more information. First one concerns  the comic strip Franky and Ralph, by Moira Manion. The strip was about a fox and snake that end up living in encroaching suburbia when their native habitat disappears. This, of course, is the central thesis of Over The Hedge as well, and in 2006 there was a minor flap about whether Fry and Lewis might have been inspired by this earlier feature; the story was covered by Minnesota Public Radio.

Besides Amber Waves, I found one other feature that lived beyond Tomorrow's Comics. Hobnob Inn, in addition to becoming an early webcomic, ran weekly in the Virginia Gazette from June 28 1997 to October 10 1998.

Thanks for much of this information from Charles Brubaker!

Comments:
I am quite familiar with this source, as I did submit features to it years ago. They even showed some interest to one of my submissions, in fact, though turned it down a second time. I may have seen an ad for this source either in E&P, or in CARTOONIST PROfiles, or in Don Cook's "The Funnies Paper" fanzine.

Grey Matter by London and Chianca

London and Chianca are Dave London and Pete Chianca. They currently do a webcomic "Pet Peeves" (full disclosure: they interviewed me for their podcast). Their "About Us" page does mention "Grey Matter", saying it ran in over 100 newspapers in US and Canada. I wonder how many of those 100 papers are college publications, tho.

John -- Do you recall if they were claiming mainstream newspaper publication to you, or just that college paper insert?

I tracked down one of the cartoonists, Ron Matzov, and asked him about Argonaut. This is what he wrote:

"My understanding of their business strategy is that they were trying to access the untapped market of the thousands of weekly and biweekly community papers. The syndicates weren’t supplying weekly papers, so Argonaut offered community papers a weekly supply of ‘free' cartoons from their roster of 50 artists. Argonaut provided free page-layout services and email delivery. They were based in Cincinnati. Lenny Dave was my contact at Argonaut. The expectation was that some of the comics would catch on, and eventually create merchandising opportunities. I viewed them as a startup cartoon syndicate for small/local newspapers. Around 1994, Argonaut had a list of enrolled weekly papers in the U.S. and Canada with a combined reach of around 1.2 million people weekly. I think they may have had a couple of conventional newspapers on the list. I actually don’t know what happened to them after that, or why they shut down."

If I had a nickel for every startup syndicate that thought weekly papers were a vast untapped market just waiting for them to exploit it ... well, I wouldn't be rich, but I'd have quite a stack of nickels. --Allan

At the time that I submitted a few comics to them, I was honestly not sure what type of publications they were targeting. But, for some reason, I was guessing that it was not the typical distributors that targeted daily newspapers.

Hi, Moira Manion here, creator of "Franky & Ralph." Just happened to do a Google search on another topic and, to my astonishment, this post came up.

As it happens, in 1993 Argonaut did a Readers Poll for Most Popular Comic, and "Franky & Ralph" won, as my editor Lenny Dave told me,"by a landslide" and "blew away the competition." I'm extremely proud of its run and the millions of readers I heard from.

MPR did do an interview with me, but I can't say I was particularly happy with it. A lot of the interview was recorded without my knowing it. Ironically, I went on to be a regular Commentator for a nationally distributed public radio program, and appeared on "Good Morning America."

Argonaut and Lenny Dave never told me why they shut down. I was sent an email saying the next page would be its last, and then complete silence. Last I knew Lenny Dave went on to be a motivational speaker.

I'm now a full-time writer (under a pseudonym), and "Franky & Ralph" may well make a future appearance as a middle-grade novel.

Moira again, to correct a flub. Lenny Dave sent me a regular letter about Argonaut's closure, not an email, as it was 1994. So hard to believe I didn't have email until 1997.

Thank you very much for commenting, Moira! Do you have any memory of a newspaper that ran the page consistently? Or was their main product the college inserts? I'm guessing as a young aspiring creator you would have wanted to see your hard work seeing actual print, and I'd love to find a long run of Argonaut's pages.