Toppers: Things We Can Do Without 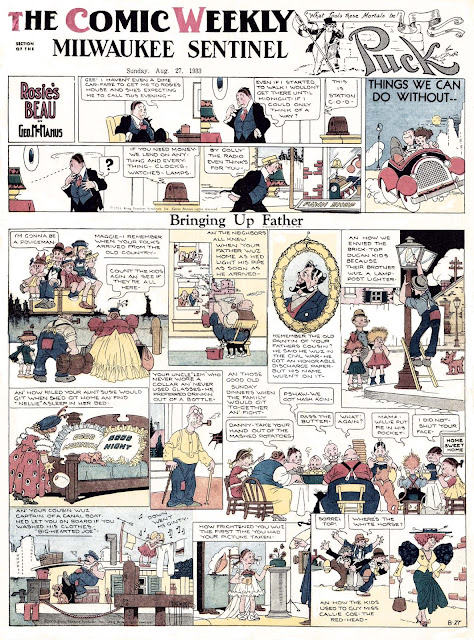 Another in George McManus' secondary toppers was Things We Can Do Without. The title pretty much says it all. This was the first of the Bringing Up Father panel toppers and ran from July 23 1933 to April 22 1934, after which it was replaced by How To Keep From Getting Old.

Comments:
I love Bringing Up Father! Does anybody know more or less exactly when Zeke Zekely started working with McManus? I know it was in the early-to-mid 1930s. This page looks like it has the Zekely touch. The lines are more crisped-up than McManus ever managed. McM's design was always great, but with Z's inking, the whole thing looks like it's been ironed with starch. Poor Z never got real credit for his improvements. Everybody always praises McM's wonderful Art Deco artwork, but it t'waren't McM who did it.

Incidentally, I also love these "memory" strips. I have lots of them from the late 40s & early 50s, but this is the earliest one I've ever seen. Anybody know when they started?

To Miss Collins, all,
I don't know what the first of this memories themed Sundays was, It would seem to me an invention of ZZ's. I do know the last Sunday ever to have McManus's signature (19 December 1954) was one of these good old days pages, and it was by ZZ.

To Mark Johnson: Thank you for the info, although I want MORE. A question, however: you say that ZZ invented the Memories strips. Do you mean to say that he wrote them all by himself? They have always struck me as being authentically penned by McManus, reflective of his own younger years.

In the early 1980s, I produced a radio show about BUF, for Canada's CBC Radio network. It included a "reading" of a bunch of the memory strips, performed as Jiggs by Don Harron (known in the USA as Charlie Farquarson on the HeeHaw TV show). We played some old-time music in the background, and also had some sound effects. That's how much I love those old memory strips.